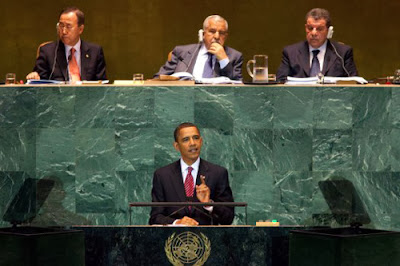 
I don’t know who looked more pathetic when President Obama addressed the United Nations Assembly on Tuesday; him or the assembled ambassadors, many from nations where human rights, justice, and liberty don’t exist. Like the League of Nations before it, the United Nations has long since demonstrated how useless it is.


Since 2003, there have been conflicts in the Central African Republic, Yemen, an insurgency in South Thailand, a civil war in Chad from 2005 to 2010, a conflict between the Palestinian factions of Fatah and Hamas, a war in Somalia from 2006-2009, and in 2008 Russia invaded Georgia, seizing part of its territory. In 2010-11 there was an Ivorian civil war. Et cetera!


In the years since 2003, the largest war of all has been the effort to eradicate the global Islamic jihad.


The U.S., while not engaged militarily, has been in a technical state of war with Iran since our diplomats were seized in 1979 and there has been no formal resolution to the war between North and South Korea, only a ceasefire. The Israelis have fought several wars since its founding in 1948 and remains in a state of war with Gaza; territory it ceded to the Palestinians in a fruitless quest called “land for peace.”


Listening to the President request that the UN Security Council pass a resolution threatening “consequences” against the Syrian regime if it does not give up its chemical weapons, I was struck by how weak the once greatest superpower, America, has become. To his credit, Obama said, “If we cannot agree even on this, then it will show that the United Nations is incapable of enforcing the most basic international laws.”


True. But the UN has a long history of not enforcing its own Charter or its Declaration of Human Rights.


As 2013 began, fifty UN member states had yet to have paid their dues for its 2012 budget. The United States, the largest contributor, had been assessed $568 million. Nine nations contribute about 70% of the budget. They include Japan, Germany, United Kingdom, France, Italy, Canada, Spain, and China.


There is nothing the UN does that cannot be done by individual and independent international organizations. In so many ways, the UN either does not solve problems or is an integral part of them. For example the UN has maintained the UN Relief and Works Agency (UNRWA), created in 1949 exclusively for Palestinian refugees. Several generations later, the support it provides does not take into account the refusal of the Palestinians to cease from demanding the destruction of the Israeli state.


When not ignoring various conflicts, the UN keeps busy creating various treaties whose purpose is to centralize power in the UN. It is hard to say which one is the worst, but the Convention of the Seas deserves to be high on the list as an attack on national sovereignty. There’s a treaty that would take away everyone’s guns—like that’s going to happen—and one intended to get people to stop smoking.


The UN has been a congenial gathering place for many of the world’s dictators and some of their nations have served on its Human Rights Council, turning it into a complete mockery of human rights. Its Middle East clique of nations wants to make it an international crime to say anything critical about Islam.


I would be remiss if I did not mention that the greatest hoax of the modern era, global warming, was directed from the UN via its Intergovernmental Panel on Climate Change. One cannot even begin to calculate the billions wasted since the 1980s, nor the man-hours of serious scientific research that was diverted to it since then.


In addition to the President’s devotion to the lies about “climate change”, Obama’s address to the General Assembly only demonstrated how delusional about international affairs he has been before and since assuming office in 2009.


“Together we’ve also worked to end a decade of war. Five years ago nearly 180,000 Americans were serving in harm’s way, and the war in Iraq was the dominant issue in our relationship with the rest of the world,” Obama said. “Today, all of our troops have left Iraq. Next year, an international coalition will end its war in Afghanistan, having achieved its mission of dismantling the core of Al Qaida that attacked us on 9/11.” Both nations are in the process of imploding.


Given the past week’s events in Nairobi, Kenya, the church bombing in Pakistan, and the continuing attacks on U.S. military personnel in Afghanistan, does anyone believe that the mission of dismantling the core of al Qaeda has been achieved?


This is, after all, a President who could only manage to get France to support his original intention to bomb Syria by way of achieving regime change. None of our traditional allies expressed any support and the UN remains stranded on the sidelines.


No one wants to follow the Commander-in-Chief into battle and with good reason. He has a record of retreating from combat. He still wants to close Guantanamo.


“We’re no longer in a Cold War”, he told the delegates, but what we have learned over the past five years is that, just because he believes his own delusions, that doesn’t mean they’re reflect reality. We are in Cold War 2.0 with Russia even if he doesn’t think so. Putin went out of his way to mock him. Prospects for any successful negotiations with Iran don’t exist, but don’t tell Obama that.


Thanks to his speech writers, Obama always manages to say the “right things.” What we know, however, is that while he can talk-the-talk, he cannot walk-the-walk.
What we know about the United Nations is that it should be told to leave the U.S. and its headquarters turned into condominiums. We are surely not getting any value for the money we have pumped into the UN.

The US should get out of the UN, and the UN should be relocated elsewhere. Anywhere but in the US. And stop sending them any more money.