There is No Plan B 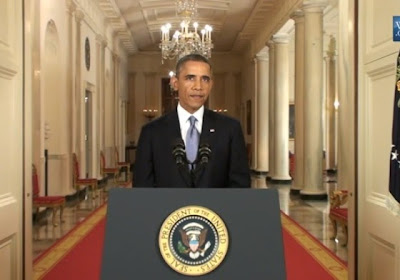 
J.R. R. Tolkien, author of The Hobbit, wrote that “It does not do to leave a live dragon out of your calculations, if you live near him.”


The current live dragon is Syria and its dictator, Bashar al-Assad. Despite two years in which he killed over a hundred thousand Syrians and made a million more refugees, no one anticipated that he would use also poison gas against them, but that’s what dictators do.


One of the reasons given for the invasion of Iraq was that Saddam Hussein had gassed several thousand Kurds. At the time, the world said and did nothing. Saddam had also waged war against Iran for eight fruitless years. Iran was our enemy, so at the time we did nothing.


When jihadi fighters fought the Soviet Union to drive it out of Afghanistan, the U.S. provided covert assistance. Then In 1993 the first attack on the World Trade Center occurred. In 1998, Osama bin Laden announced a declaration of war on the U.S. Until September 11, 2001, we mostly ignored him.


Now the U.S. must confront a civil war in Syria, an element of which includes al Qaeda, and the primary criticism of President Barack Obama is that he has no Plan B.


Despite the live dragon in Syria, he mostly dithered for the last two years. Obama gained office by opposing our wars in the Middle East and seeking to withdraw from Afghanistan and Iraq. He has spent the last five years cutting the U.S. defense budget.


He has had no success choosing winners and losers in either Libya or Egypt. He initially demanded that Assad step down.


He delivered a very polished speech the evening of September 10th, but it mostly depended on his contention that, if we don’t stop any further use of poison gas by Assad, he said, it could lead to unknown and unknowable larger consequences.


Left unsaid was that, when he decided to go to Congress to seek authorization for military action, he discovered that neither the majority of Americans, nor those in Congress wanted to choose that option.


He has no coalition of nations—the international community—supporting him and he is equally besieged by both the left and right of political opinion. He is a man who is running out of options and what he needs is enough time, enough delay, to let this crisis go away. Congress has been asked to “pause” and the United Nations has been asked for a resolution. In short, do nothing.


One reason for a strong military is to deter aggression. Military action should be undertaken to fight and win a war. It is used when diplomacy has failed. “Tonight I give thanks for our incredible military” said Obama, but he has done everything he can to hollow out its capacity to fight.


Russia has stepped in with a plan for the Syrian dictator to relinquish his arsenal of poison gas and allow it to be removed and demolished. That will take time if, in fact, it ever occurs. Russia gains because Syria, a satellite of Iran, is an ally. The bad guys win this round.


America looks weak. The President looks weak.
“We should act,” said Obama. “That’s what makes us exceptional.” That’s what formerly made us exceptional, but Obama has spent five years trying to transform America into a European socialist economy with an isolationist outlook. In that he has succeeded.


America has some forty more months with Obama as President. His incompetence is fully on display. His failures can be seen in a languishing economy and a nation filling up with millions of unemployed and millions of part-time employees thanks to an unaffordable and unworkable Obamacare.


The world’s leaders have taken his measure and found him wanting.


On the twelfth anniversary of 9/11, Obama gives little indication he has learned from it or any of the nation’s history, either in peace or in war.