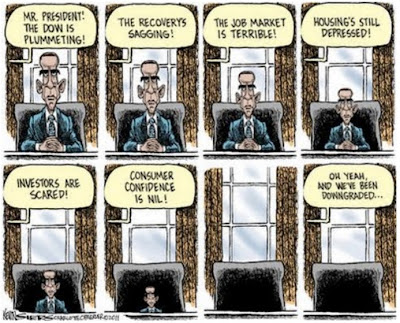 
A half hour late to his Rose Garden announcement on Saturday, President Obama put the best possible spin he could on his badly timed threat to lob a half-billion dollars’ worth of Tomahawk missiles into Syria as retaliation for the gas attack; one whose perpetrator is not as yet known with any certainty.


This is a President who could not put together a coalition of nations to support his proposed action. His predecessor (“It’s all Bush’s fault”) had some forty nations on board for his attack on Iraq. Obama could not get a United Nations’ resolution. His predecessor had some sixteen UN resolutions. He has been told that Congress would have to authorize covering the cost of the action and of replacing the missiles because his administration has cut the Defense Department budget to the bone.


There’s a word to describe someone who would get himself into such a fix: JERK.


Obama will fly off to a G-20 conference where the other world leaders will no doubt treat him like the witless fool he has proved himself to be time after time. What other president would announce a surge into Afghanistan in 2011 at the same time he announces when the troops would be leaving? What other president has managed in increase Russia’s influence in the Middle East while diminishing our own?


France has offered to hold his coat while he engages the U.S. in an utterly futile military attack on Syria, but the British concluded that they wanted no part of it. The whole of the NATO pact nations have made that plain as well. Obama couldn’t organize a weekend camping trip for a pack of Boy Scouts.


While he makes himself look weak, he is also making the U.S. look weak and that is because we have been weakened…by him. When Clinton did this after U.S. embassies were bombed, we ended up with 9/11. Obama’s reaction to last year’s Benghazi attack was to lie about it.


Looming over everything is a massive $17 trillion debt that is largely the result of incredibly inept decisions Obama made since taking office. The “stimulus” that pour billions into non-existent “shovel ready jobs”, the billions wasted on “renewable energy” companies that promptly went bankrupt, the takeover of General Motors that stiffed its creditors, and, of course, Obamacare.


The damage Obama has done to the U.S. will take the effort of several presidents to repair, assuming that the nation doesn’t implode from its debt and the declining value of the dollar. Obama’s solution is to raise taxes. Kennedy’s and Reagan’s was to lower them and thus speed recovery. Obama is a JERK.


In the process of shrinking, it is interesting to watch the way his incessant speech-making has rendered his audience deaf to what he is saying. Not only was he late to the podium on Saturday, but the only thing anyone really heard was that he was calling off the missile attack.


Asking for a vote in Congress was his only option despite his assertion that he could take the nation into war on his own authority. He may well discover that he has united Congress against him despite top secret briefings and other theatrics. By now the members of Congress have learned to be wary of the “intelligence” being provided.


By now the members of Congress are unhappy with a President who has demonstrated he would prefer to govern without them. By now even members of his own party know that Obamacare is a disaster that can cost them their seats. As the midterm elections loom in 2014, it will be every Democrat for himself or herself. It sets him up for a historic rebuke.


In terms of real power, one can see it seeping away and Obama has likely already begun his lame duck presidency earlier than is the customary two years before the next national election. The midterm elections in 2014 could cost the Democrats control of the Senate and the House. At that point, Obama will have plenty of time to play golf.


I have, over the course of his first term, written on this same theme and it has taken some time for me to grasp just how powerful the support of the mainstream media has been in protecting Obama from gaffs and bad policies. I have taken note of the disaffection expressed by some in the liberal media, thinking that it was larger than just a particular columnist or editorial.


I think, however, that Obama has reached a genuine tipping point. Even if Congress were to authorize a missile attack on Syria despite what he admits is a “war weary nation”, it will be discounted as too little, too late.


At that point, like all second term presidents, Obama will feel his power to influence events slip away. No doubt he already has.

Alan, this is what happens when affirmative action is used to promote someone beyond their level of expertise. This procedure has ruined many people because they were never held accountable for their failures. Obama never was qualified, but we elected him anyway to show that we were not biased.

Alan, you assume that Obummers goal since January 20,2009 wasn't the destruction of the United States for the greater glory of International Socialism and Islamofascism.

But even if the end of the USA as the world's only superpower wasn't the real endgame for The One, then his decisions make the collapse of the United States almost inevitable.

Hence, from the viewpoint of America's enemies, The Magic Negro (so says the L.A. Times) has been a great success story.

Obama is playing games my friend; he is trying to *game* the Syrians, the Muslim Brotherhood and the citizens of this United States of America. Obama is hoping that Congress approves his idea of striking Syria, even though there has been no solid proof that the Syrian regime gassed its own people, and failing that, with or without Congressional approval, he is going to hit Syria anyway.

It’s that EGO thing, Obama is going to try and prove that he is a MAN. Sadly, he can’t SPELL man.

Congress must stop this POTUS from taking America into the Syrian conflict and should they rule against him and should he go ahead with his plans to strike Syria, impeachment proceedings should be started immediately.

"What other president would announce a surge into Afghanistan in 2011 at the same time he announces when the troops would be leaving?..."

A President who's trying to pick up conservative votes without losing votes from his liberal base, that's who ....

He's pathetic. He has no spine and the few principles he does have are completely unaligned with those of regular, decent Americans. All he really cares about is partisan politics and advancing his progressive agenda...

I still can't believe that there are enough people in this country who are stupid enough to elect someone like Obama, but given the level of dependence our society has on government now, I suppose I shouldn't be surprised. Someone who's as skilled at making promises as Obama is is bound to get a lot of votes ...