Will Australians Vote to End the Carbon Tax? 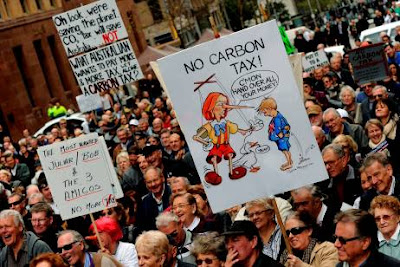 
There’s an election in Australia on Saturday, September 7, and while the economy is of the greatest concern, it is a carbon tax that has driven up costs and put businesses into closure that is the issue that will determine the outcome. Meanwhile, in the U.S., imposing a carbon tax remains a top priority of the Obama administration.


A carbon tax is really a tax on the use of energy. Diehard environmentalists oppose any form of energy use. The code words are “greenhouse gas emissions”, meaning carbon dioxide (CO2) that the Greens constantly tell us will cause the Earth’s temperature to rise, but the Earth is not cooperating, having been in a natural cooling cycle going on 17 years now. Nor are the apocalyptic predictions about CO2 anything more than lies given the fact that it is a minimal element of the Earth’s atmosphere. That said, without it, all life on Earth would die because all vegetation depends on it.


In “Taxing Air: Facts and Fallacies About Climate Change”, Bob Carter and colleagues dismember green claims and, addressing Australia’s carbon tax, note that “price increases will cascade through the economy, and for most of them no compensation will be proposed. At the bottom of the pile, to whom the accrued costs will be passed, lies the squashed citizen and consumer.”  Those citizens will be voting on Saturday. As an article in The Guardian, a British daily, noted, a conservative coalition led by Tony Abbott is likely to win, ending six years of Labor (socialist) rule that included a battle within the Labor party for its leadership, the result of its having passed a carbon tax after the then-Prime Minister, Julia Gillard, had promised not to impose it. Kevin Rudd challenged and replaced her. Now he and the Labor party are expected to be defeated.


“Having built his standing as opposition leader on the contention that Labor’s carbon tax would destroy jobs and hurt households,” the Guardian article noted, “Abbott has promised his first legislative act as prime minister will be to repeal it.”


What has occurred in Australia is a case history example of what happens when greens get their way. They always manage to destroy the economy. A recent study of Australia’s carbon tax by the Institute for Energy Research yielded the following findings:


# In the year after Australia’s carbon tax was introduced, household electricity prices rose 15%, including the biggest quarterly increase on record.


# Currently 19% of the typical household’s electricity bill is due to Australia’s carbon tax and other "green" programs such as a renewable energy mandate.


# The job market had previously been stable, but after Australia’s carbon tax, the number of unemployed workers has risen by more than 10%.


# Because Australia's exports are relatively emissions intensive, the practical result of the Australian carbon tax serves as a tax on exports and import-competing industries.

# Due to fiscal gaps that exist between carbon tax revenues and increased government spending that accompanied the scheme, Australia's budget bottom line will worsen as higher deficits and greater public debt increase.


# Carbon dioxide emissions have actually increased, and will not fall below current levels until 2043, according to the Australian government.


Viv Forbes, chairman of the Carbon Sense coalition in Australia, an opponent of the carbon tax and other green proposals, says “The growing failure of green energy in Europe should warn Australia to abandon bi-partisan policies dictating targets, mandates and subsidies for ‘green’ energy.”


This mirrors the same problems here in America where billions in loans to so-called green energy companies can be added to the list of Obama administration scandals as one after another went out of business. Solar and wind power is proving to be as great a hoax as “global warming” and a very costly one at that. How long has it being going on? Jimmy Carter had solar panels placed on the roof of the White House. Ronald Reagan had them removed. Barack Obama has had them installed.


Fifteen million registered voters in Australia will go to the polls and render their judgment on September 7. It is a vote that should be reported upon in the United States, but it more likely to be ignored or buried.

thanks for posting this.

Tomorrow is voting day, and while similar to how it is done in the U.S. there are some differences.

Opposition Leader Tony Abbott is quite likely to become the next Prime Minister, and within days of his election, if that happens, he has promised that the first thing his new Government will do is to begin to repeal the Carbon Tax/ETS.

While (naturally) both sides have a degree of confidence about the outcome, all indicators are pointing to a very comfortable win for Tony Abbott, who leads the Liberal National Party, and while liberal means one thing in the U.S. here in Australia it means the other, as the Liberal Party is the major political party from the Conservative side of politics.

In the lead up to the last election in 2010, I wrote a Post for the site I contribute to to explain some of these differences, and while it might have been for the last election, it is still current as it is generic and just explains the process. That post is at the following link, and just copy and paste this link into your address bar of a new tab, and the Post will open.

The dominoes that intricately hold up this climate change/global warming hoax are gradually beginning to crumble, and tomorrow, Saturday our time here in Australia, we begin to roll back some of that onerous legislation.

The wheels are coming off the Global Warming Express as our sun continues its historic activity decline of cycle 24 into Maunder Minimum worthy cycle 25. Expect bitter cooling over the next two decades. http://junkscience.com/2013/09/05/uk-met-office-admits-no-evidence-we-are-seeing-things-that-could-not-have-happened-without-natural-weather-variability/

"...the Liberal Party is the major political party from the Conservative side of politics."
-
Things really are upside down down under.

Australia's conservative opposition swept to power Saturday, ending six years of Labor Party rule and winning over a disenchanted public by promising to end a hated tax on carbon emissions…

The Left (Socialist) Labor party was defeated in the worst poll ever, but due to our stupid preferential voting system we have lots of nutters and crazies in the Senate now. It will be interesting to how it develops, keeping in mind we have had 6 years of universities, colleges and schools brainwashing for 2 generations.