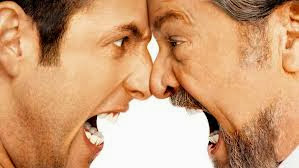 
There is plenty of anger to go around. The mood of the nation is one of anger from one end of the political spectrum to the other.


What is one to make of a White House senior advisor, Dan Pfeiffer, who compared Republicans to arsonists, hostage-takers, and suicide bombers? The Majority Leader in the Senate, Harry Reid, told Republicans that “There’s no need for conversations” telling them to send over a continuing resolution without defunding Obamacare. He has called Tea Party members of the House “anarchists.”


Meanwhile, Republicans who do not want to see the government shut down are labeled “RINOs” (Republicans in Name Only). Instead of keeping the spotlight on the Democrats who foisted Obamacare on us, we have been watching the Republican Party tear itself apart.


As the Wall Street Journal columnist, Kimberly Strassel put it, “The tragic reality is that this vote isn't shaping up to be all that perilous for the owners of the law. Nobody is even talking about Democrats. Nobody has put an iota of pressure on them for months. Every camera, every microphone has been trained on the GOP.”


Her colleague, Daniel Henniger, described the fratricide arising from the dispute over defunding Obamacare, saying, “This effort has not, for some time now, been about victory. It has become as RedState’s Erick Erickson put it with his usual eloquences, about shining a light on the ‘cockroaches’ in the GOP. Ted Cruz has spent months berating his own side as ‘appeasers’ who care only about ‘being invited to all the right cocktail parties in town.”


The result has been a GOP in meltdown while the President happily joined in on Friday calling the Tea Party members in Congress—though not by name-- “extremists.”


All this has brought to mind Barry Goldwater’s declaration to the Republican Party when he accepted their nomination to run for President in 1964. “Let me remind you that extremism in the defense of liberty is no vice. And moderation in the pursuit of justice is no virtue.” He lost by a landslide to the incumbent, President Lyndon B. Johnson.


I understood what Goldwater meant, but extremism has never played well in American politics. Indeed, the Constitution is constructed so that any form of extremism can be thwarted by the checks and balances that slow any rush toward ill-considered legislation. That, however, did not work when the Democrats controlled both houses of Congress and imposed Obamacare on everyone.


Those who believe that, even with a Republican majority after the 2014 midterm elections, President Obama would not veto a bill to repeal Obamacare are deluding themselves.
Hating Obama is not enough. Understanding how our republic works is essential.

Tea Party came about initially as a protest against Obamacare and then grew has a grassroots political movement that elected a number of those it supported to the House. It is this bloc of votes that Speaker John Boehner has struggled to work with. In the Senate, Tea Party members include Ted Cruz, Rand Paul, Tom Coburn, Marco Rubio, and Pat Toomey. 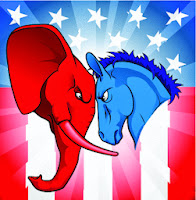 Obama has many faults, but he has proven himself a master manipulator. The current struggle over Obamacare has played into his hands. That is unfortunate because what the GOP must do between now and the 2014 midterm elections is to focus on defeating those Democrats up for election who have supported Obama.


The general anger against Obamacare will gain in momentum, but if the GOP is seen as a bunch of crazies, it will affect the outcome. That’s the way it played out in 1964.


At this writing the possibility of a government shutdown is fifty-fifty. It will be over quickly, but by then the GOP will have dealt itself a disservice.


Until the GOP secures control of the Senate, the House, and the White House Obamacare will remain the law of the land. That is very bad news for all Americans and the future of America. Meanwhile, it is a good idea to remember that many bad laws have been reversed and repealed.

Today we have only one political party - THE PARTY OF BIG BROTHER!

Hence, We The People, the patriot majority of limited constitutional rule have no effective representation in Washington, D.C.

Therefore, the collectivist elites running the federal government can safely ignore the will of the majority.

...AND THEY WILL HAVE THEIR OBAMACARE!

In America the lights of freedom are going out one by one and the pale specter of tyranny casts a giant shadow over the once free country.

The reality is that the regime in Washington is illegitimate, lawless, malign, corrupt, violent and dishonest. These includes all of it: all political parties, all elective and appointed officials, the judiciary, the civil service and the military. Hopefully, it will collapse into something like the Articles of Confederation with only minimal violence.

No amount of democrat defeats by moderate republicans will solve the problem in Washington. Read "The Liberty Amendments" by Mark Levin for the answer. It will not happen overnight. Neither did the revolutionary war. Education of the masses with the Constitution emphasized will need to be included. NEVER give up!