Sometimes I think that Jews are going to have to arm themselves in order to celebrate Chanukah. These days, merely praying in a synagogue, whether it is in Jerusalem or Brooklyn has become hazardous. 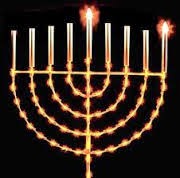 Of course, those who hate Jews don’t really need an excuse to attack them. In November, Palestinian attackers killed five Israelis, four of whom were rabbis, in a Jerusalem synagogue. On December 8, a lunatic shouting “I want to kill the Jews” stabbed an Israeli student in the Chabad-Lubavitch synagogue in Brooklyn. The student survived the attack. Police killed the attacker.


December 16 through 24 marks this year’s celebration and one can only hope that it will be enjoyed without providing an excuse to attack Jews around the world. Chanukah celebrates an ancient military victory.
Known also as the Festival of Lights, the menorah that holds nine candles is the widely recognized symbol of the holiday; eight for the days and one to light the others. It celebrates the overthrow of an oppressive Greek ruler, Antiochus IV, and the rededication of the temple. Chanukah is not mentioned in formal Jewish scripture though the story is related in the book of the Maccabees. In 1948, Jews restored the nation of Israel.


Chanukah is a relatively minor Jewish holiday compared to the holy days of Rosh Hashanah, Yom Kippur or Passover. Because it falls close to Christmas, American Jews have incorporated it into their celebration and one suspects that most are likely to exchange gifts on December 25th to blend both holidays together as one


Of the estimated 14 million Jews worldwide approximately 5.5 million live in America. An estimated 6.2 million live in Israel, with 2 million in Europe, and about 100,000 in Africa, most of whom live in the nation of South Africa.


Fourteen million Jews may sound like a lot, but they represent about 0.2% of the world’s population. You could put them all in Texas and few would notice.


In the Middle East, Christians and Jews have been driven from their homes where many families had lived for centuries. In Syria and Iraq these days Christians are being crucified and beheaded for their faith. Muslims divided by whether they are Sunni or Shiite are also dying. It all seems so pointless.


Worldwide, religious and other forms of bigotry continue during this Chanukah and Christmas season as ever before.


One need look no farther than the United Nations which, on December 10, celebrated the anniversary of the adoption of the Universal Declaration of Human Rights in 1948. In 2014 the UN General Assembly adopted twenty more resolutions against Israel than any other nation for alleged violations of human rights. To put this in perspective, not one resolution was directed at China, Russia, or Saudi Arabia, among a long list of nations that deserve criticism.


Citing the Religious Freedom in the World Report 2014, Rabbi Jonathan Sacks noted that “Freedom of religion has deteriorated in almost half the nations of the world and sectarian violence is at a six-year high.”


Here in America, as the first Chanukah candle is lighted this year we are days from celebrating Christmas. These holidays are a good time to remind ourselves to resist those for whom religion is a reason to hate others as well as those who reject spiritual faith and seek to deny its message and joy to everyone.

These holidays are a time to rededicate ourselves.

Nope. Christmas-time is a time to show a joyful, loving spirit, and that's all. That's why there is Santa Claus, and gaily decorated Christmas trees (evergreen trees, to symbolize the undying and joyful--and hence holy--spirit behind man, and within if we're open to it). (Doesn't everybody know this YET?) New Year's is the time for re-dedication. So, clearly, "Chanukah" is entirely misplaced, and the Jews just don't get it ("ancient military victory"...sigh...when will they learn, Father?).


...and what's this "Chanukah" business? Jesus, what happened to "Hanukkah"? (Go on, try to pronounce "Chanukah".) Who's in charge here?...But I digress. Merry Christmas, and no fighting under the mistletoe. Take it outside, and far away (or, get thee behind me, Satan).

I will rededicate myself to finding the "right" way to spell Chanukah... or is that Hanukah?

And, yes, Merry Christmas too!

The festival of good Kentucky Bourbon... Now THAT is a holiday I can get behind...

And I don't care how you spell it, the Jews got some good mileage out of that Menorah oil...

Alan, the Jewish people are hated because they were the chosen people. It's as simple as that. One only needs to read the OT to see who founded Islam, brothers of the non-chosen Israelites. Envy drives a lot of the evil in the world.
And Merry Christmas to you to!