In late October I wrote a commentary “Is America in Decline?” based on a book by James MacDonald, “When Globalism Fails: The Rise and Fall of Pax Americana”, due for sale in January from Farrar, Straus and Giroux. Within days I received “The Accidental Super Power: The Next Generation of American Preeminence and The Coming Global Disorder” by Peter Zeihan.

Both authors have good credentials, but the former concludes our position as a super power will recede in the decades ahead and the latter says we will be the only one left as the rest of the world runs into problems that the U.S. will be able to ignore.


Zeihan, a geopolitical analyst, offers the scenario of an America, blessed by its location and ability to provide its own energy and agriculture, that will be largely untouched by a future in which most other nations will suffer various unpleasant levels of decline.


Both Zeihan and MacDonald see the U.S. abandoning its role since the end of World War II in 1945 as the generator and protector of free trade.

Our naval capability has kept the world’s sea lanes open and free of predators, a boon to all nations. A system for free trade set up at Breton Woods in 1944 has served the world well, including former enemies, Germany and Japan. Other nations, depending on their location, resources, and population, have had varying degrees of success.


“The conventional wisdom that the United States’ best days are behind it” says Zeihan, “isn’t simply wrong. It’s laughably so. In 2014 we’re not witnessing the beginning of the end of American power, but the end of the beginning. In fact, we’re on the cusp of a shift in the international order just as profound as those delegates back in 1944 experienced.”


While MacDonald sees the role of the U.S. as Pax Americana waning, Zeihan sees a national withdrawal from the international scene based on the wealth the shale oil and natural gas technology is generating and the productivity of our huge agricultural sector to keep us fed while other nations struggle to grow and find food sources.

I disagree with Zeihan. Americans don’t like having to be involved in the problems that other nations create, but they also see themselves as the solution whether it is deterring rogue nations that threaten their neighbors or aiding when a natural disaster occurs. 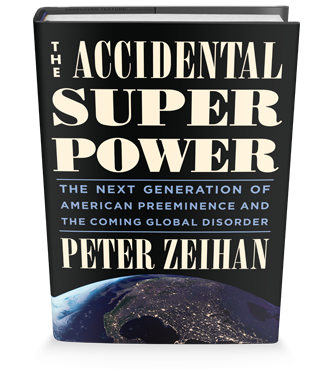 Zeihan focuses on the role of maritime power on the oceans that gave rise to Great Britain and other nations that could field a navy that could trade at great distances from their homelands. The history of colonization reflects that power. Internally, he points out how blessed the U.S. has been with a waterway system of numerous navigable rivers that made it possible, for example, to grow wheat in the midland but ship it anywhere. This ability to transport food crops as well as people opened America to fairly rapid expansion and growth.


Unlike other nations, its population came from everywhere and reproduced at rates to meet its need for labor, while its free market system, along with the industrial revolution, stimulated innovation and growth. The oldest constitutional government in the world generated confidence in an “idea” called freedom and liberty instead of relying on blind nationalism.


While I may disagree with some of Zeihan’s predictions about the future, his book provides a wealth of information about the individual advantages and disadvantages of the nations whom we regard as either friendly toward or threatening our nation. Their locations are critical to their future and always have been. Their ability to transport people and goods within and beyond those locations are also critical factors.


Overlaying that is demographics, the statistics of population, identifying which nations whose people are “getting older” and which have enough younger people to generate wealth while the older generation retires and lives off their own savings and/or government programs such as our Social Security and Medicare.


Zeihan points out that “The United States is far and away the world’s largest consumer market and has been since shortly after the Civil War. As of 2014, that consumer base amounts to roughly $1.5 trillion. That’s triple anyone else, larger than the consumer bases of the next six countries—Japan, Germany, the United Kingdom, France, China and Italy—combined, and double that of the combined BRICs (Brazil, Russia, India, and China).”


Zeihan believes that “the free trade era is closing (and) demography tell us that the era of consumption-driven growth that has been the economic norm for seventy years is coming to an unceremonious end.” He believes that the “global financial wave will crest at some point between 2020 and 2024” and predicts that “Poland and Russia will be among the nations whose populations will not keep up with their need for labor.”


“Between 2020 and 2024, thirteen of the world’s top twenty-five economies will be in the ranks of the financially distressed. The new arrivals will include Canada, Germany, the Netherlands, South Korea, Switzerland, the United Kingdom, and of course the United States. With 90 percent of the developed world in that unfortunate basket, the availability of capital and credit for all will plummet.”


That Ziehan’s scenario and he blames it on “aging demographies”, but he does not factor in the ability for various elements of the world’s population, the younger ones in particular, to move around the planet and respond to occupational opportunities.

A current example is the exodus from Mexico and some Latin American nations to the United States for jobs and better lives. Can we absorb the current numbers of illegal aliens? I think yes and I also believe being able to impose “security” along a two thousand mile southern border is probably a fantasy. If we actually enforced our immigration laws this problem would be reduced.


Mexico is our third largest trading partner. To the north Canada ranks second. Together we make up a continent, as Zeihan predicts, that will not be negatively affected as other nations.


So, while we worry about Russia, Zeihan sees it in rapid decline. While pundits tell us of China’s rise to financial preeminence, he reminds us that we felt the same about Japan not that long ago. And China has massive demographic problems, not the least of which is an aging population. He doesn’t hold out much hope for the European Union. Et cetera.


I do not possess Zeihan’s or MacDonald’s credentials, but my instinct tells me that a sudden, rapid international decline is unlikely to occur. It’s a different world in which we all live and far more connected in many ways. Adjustments and changes will be made as they always have, but we are not likely to see a century like the last one that was dominated by wars. They are just too expensive.

This man's predictions are about as much value as climate models.