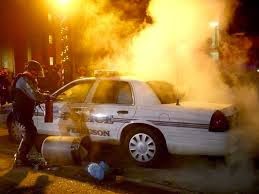 
When you get right down to it, the protests said to be about the shooting of Michael Brown are really about how differently the black and white communities view the police. Blacks may want and need protection, but they don’t have the level of confidence in the police that whites express.


That protection occasionally includes having to shoot those who threaten the lives of police officers. If the Ferguson and other city protests are against that they are as irrational as the burning down of the Brown family’s church.


What we are witnessing is a rejection of the rule of law and those who put their lives on the line to protect society.


The President got involved, predictably urging that violence be avoided, but also saying that the protesters should “stay the course.”


Here is an excerpt from The New York Times:


“Some of the national leaders met with President Obama on Nov. 5 for a gathering that included a conversation about Ferguson.


According to the Rev. Al Sharpton, who has appeared frequently in St. Louis with the Brown family and delivered a speech at Mr. Brown’s funeral, Mr. Obama “was concerned about Ferguson staying on course in terms of pursuing what it was that he knew we were advocating. He said he hopes that we’re doing all we can to keep peace.”


Protest leaders said wholesale change was ultimately what they were demanding, though not all agreed on what that meant. Some called for the removal of the Ferguson police chief or the entire department. Others said they want the police to wear cameras; civilian review boards for all police shootings; or a requirement that ethnic and racial makeup of police departments match the communities they serve.


“It must be changing how police and citizens relate to one another,” said Michael T. McPhearson, the co-chairman of the Don’t Shoot Coalition. “We’re calling for police accountability, police transparency, changing how the police do their work. If there’s an indictment or if there’s not an indictment, we still have that work to do.”


As reported by the Times, according to the black community leaders the problem was the police, not the community. In an appalling lack of judgment and prudence, The New York Times published the name of the street on which Officer Wilson lives! A Twitter user published what he claimed was the address and a photo of his home.


As far as the media was concerned the story was about police officer Wilson, not Michael Brown or the protesters, except insofar as they provided dramatic video. The story became a repeat of charges against police of “racial profiling” and other actions resulting from just doing their job.
As we know, lots of the violence took the form of looting and destruction of Ferguson businesses occurring before and since the grand jury decision. What has surprised many observers was the way neither the Missouri National Guard, called out by the Governor, nor other police authorities engaged the “protester’s” criminal behavior, arresting few while concentrating on protecting the court house and police headquarters.
One of the dramatic forms of protest was to burn police cars.
I recall an event involving President Obama and a police officer when, on July 16, 2009, Harvard University professor Henry Louis Gates, Jr., an African-American, was arrested at his Cambridge, Massachusetts home by a local police officer responding to a 911 caller’s report that men were breaking into and entering the residence. As the facts came out, professor Gates had returned home from a trip to China and found the front door jammed shut. With the help of his driver, they tried to force it open. When the police officer, James Crowley, showed up responding that what well could be a crime in progress, Gates was less than cooperative and charged with disorderly conduct.
The charges were dropped, but the event invoked a national debate about “racial profiling” by police. On July 22, President Obama commented on the incident, criticizing the arrest and Officer Crowley’s actions. The national response was a massive rejection of the President’s comment and, two days later, a photo op was staged at the White House where both Officer Crowley and professor Gates were seen with the President enjoying a beer together. Indeed, it became known as the “Beer Summit”; all because of Obama’s assumption that racial profiling, not the actual facts of the event, was the reason Gates was charged.
Who doesn’t like the police? People who tend to get questioned by them and who get arrested by them. Many of those people are black because a significant amount of crime in America is perpetrated by blacks and a significant percentage of those incarcerated in our prisons are black. Who have been their victims? As often as not, other blacks.
As John Lott, president of the Crime Prevention Research Center, noted in a Daily Caller.com commentary, “The average black person is 6.5 times more likely to be murdered than the average white person. Over nine out of every ten black people who were murdered were murdered by other black people.” And many were young men like Michael Brown. The slaughter in cities like Chicago, Detroit, and St. Louis is commonplace and appalling.
As the facts of the Brown shooting came out most whites concluded that Brown was a thug and, indeed, a large one at six feet, four inches and weighing in at over 300 pounds. The “gentle giant” was caught on video threatening a store employee after stealing some cigarillos. Even though he was “unarmed”, a fact repeated in every story, the grand jury concluded that he had attacked Officer Wilson who then had acted in self-defense.
I do not want to appear to condemn “all” blacks because to do so would be idiotic. The criticism here is directed at cultural values that are well established and documented, but that does not mean that “all” blacks share them. Many have achieved success since the days of the civil rights movement and one can only hope that many more blacks will join them, be lifted out of poverty and freed from poorly performing schools. One can hope the same for others as well.
In cities and towns where blacks are a significant part of the population they are likely to need more police protection than whites. And many of the police who provide that protection are white. I guarantee you that the next time a black person feels threatened and calls the police they are not going to ask what race the officer is.
© Alan Caruba, 2014
Posted by Alan Caruba at 7:53 AM