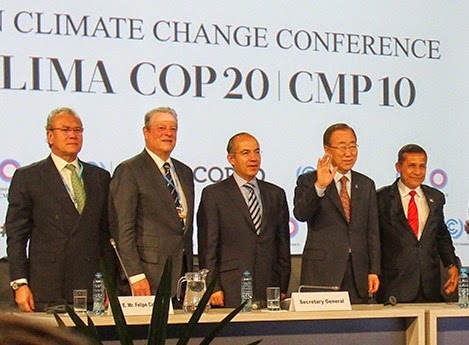 
Most of the people of the world have concluded that the decades of warnings about “global warming” and its successor, “climate change”, is just idiotic nonsense. Few believe that humans ever had or ever will have any role in what the weather will be tomorrow or a thousand years from now. They are right.


One of the most distinguishing factors about the Anthropogenic Global Warming theory has been the way its advocates have always predicted major changes decades into the future. When the future arrived, as it has since the first doomsday predictions were made in the late 1980s, they simply push off the next arrival date for another couple of decades. A classic example is the prediction that that Arctic and Antarctic sea ice would have all melted by now. Instead the global cold weather have been making new records of late.


The Kyoto Protocol dates back to 1997 and sets limits on how much “greenhouse gas” emissions, primarily carbon dioxide (CO2), nations could permit. The theory, now long since debunked, that CO2 was rising and would cause the Earth to warm too much was right in only one respect. There is more CO2, but the Earth has been in a cooling cycle for some 19 years at this point. The U.S. did not ratify, i.e. sign onto the Protocol. The Senate unanimously rejected it. Canada later withdrew from it. China and India were both exempted from it!


So what we have been witnessing have been a bunch of international officials wrangling over something that did not happen and will not happen.


The hard core “Warmists” wanted the climate change agreement to be legally binding under international law. They were led by those from the European Union. They and others wanted more money to be spent on renewable energy, wind and solar, and money given to poor countries to help them deal with climate change.


The COP20 conference was not about the climate. It was about funding wind and solar energy projects that have proven globally to be huge, expensive failures, and about providing money to poor countries that, as often as not, are poor because they are poorly governed. It’s a scheme based on totally false “science.”

As to the “science” proclaiming a warming Earth and that “greenhouse gas emissions” are responsible, the easiest and most entertaining way to learn the real science is to read Anthony Bright-Paul’s new book, “Climate for the Layman.”


Bright applies the known knowledge of the universe in which we live with the kind of logic you are not likely to hear from the likes of Al Gore or Bill Nye the “science guy.”  Add to them the blissfully ignorant legions of “leaders” of various nations who have signed off on “global warming” without a lick of knowledge with which to refute the lies and you get idiotic conferences and demands to end the beneficial use of fossil fuels which improved our lives long before and since the IPCC was created.


“So how does one measure the temperature of something that has a multiplicity of temperatures and is constantly on the move?” asks Bright-Paul. “It is clearly impossible.”  How difficult is that to understand?


“In my dictionary,” says Bright-Paul, “’Global’ is defined as ‘worldwide’. So let us ask ourselves the question—has there been a worldwide warming of 0.07 degrees Celsius? Has there been a uniform increase in temperatures worldwide? The answer is simple. It is utterly impossible to make such declaration”, adding that “It is completely impossible to measure the temperature of the atmosphere which is 100 kilometers high and which has a huge range of temperatures in a continuous state of flux.”


If it cannot be measured then years from now the climate cannot be predicted. The weather—what is happening where you live—can only be predicted in general terms for the next few days and that is largely thanks to modern satellites. Moreover, the weather is never exactly the same from day to day. Meteorologists focus on what’s happening now, but climatologists measure the climate in units of decades, the smallest of which is thirty years. The largest take in millions of years.


Carbon dioxide is such a minor “trace” gas—0.04% of the Earth’s atmosphere--that most people are astonished to learn that it is Nitrogen and Oxygen that make up 99% of the atmosphere. Both are transparent to incoming and outgoing radiation. It is the Earth that acts as a conductor of heat, affected as always by solar radiation. It is the Sun along with the actions of the oceans and volcanic activity that determines the weather and, long term, the climate.


Virtually everything you have heard or been told about “greenhouse gas emissions” is pure bunkum.


The Earth is not a greenhouse closed in by heat trapping gases. It is the mass of the Earth that absorbs the Sun’s radiation and reflects it into the atmosphere. The process is so dynamic that there is no way to accurately predict what the temperature anywhere on any day.


The IPCC and its idiotic “climate change” conference wants you to believe it can predict the climate of the entire world! And control it.


Not a single dime of U.S. taxpayer’s money should be devoted to either the U.N. or any bogus “global warming” claims. We could begin by defunding the Environmental Protection Agency’s regulations to limit “greenhouse gas emissions”, the reason they give for closing coal-fired plants to produce electricity.


We should laugh Secretary of State John Kerry off the stage every time in claims that climate change is the greatest threat to life on Earth.

There is also no such thing as a "greenhouse gas".

Firstly, no gas can "trap" heat.

Secondly, our atmosphere in no way acts like a greenhouse

Finally, the GHE (greenhouse effect), as posited by the IPCC, being the radiative GHE, whereby "downwelling longwave radiation" from so-called "greenhouse gasses" further heats the surface of the Earth, is, in no uncertain terms, IMPOSSIBLE!