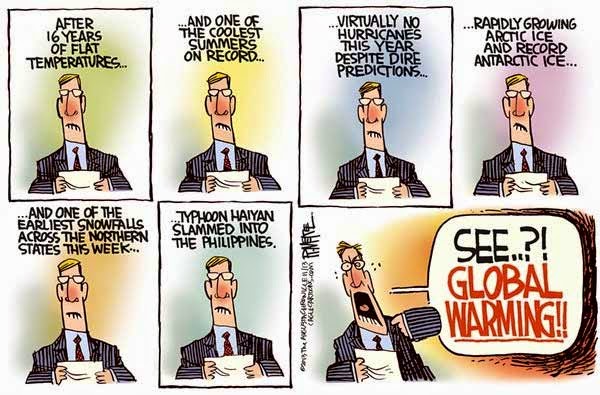 
To understand all the talk of “climate change” you must understand that everything and everyone involved—except for those of us who debunk the lies—are engaged in a criminal enterprise to transfer billions from industrialized nations to those who have failed to provide a thriving economy, often because they are run by dictators or corrupt governments who skim the money for themselves.


The lies being inflicted on Americans include Obama’s “war on coal” that is shutting down coal-fired plants that affordably and efficiently produce the electricity the nation needs, along with the six-year delay of the Keystone XL pipeline. Add in the thousands of Environmental Protection Agency regulations affecting our manufacturing, business and agricultural sectors and the price we are paying is huge.


At its heart, environmentalism hates capitalism.


One of the worst parts of this scam to take from the rich and give to the poor—otherwise known as “redistribution”—is the way the world’s media have played along since 1992 when the first Earth Summit was held in Rio. The perpetrators are headquartered in the United Nations, home to the Intergovernmental Panel on Climate Change (IPCC) that sets the agenda.


While the 20th session of the United Nations Framework Convention on Climate Change’s Conference of Parties meets in Lima, Peru this week, perhaps the most egregious and outrageous example of journalism was the December 2nd Associated Press article, “Hotter, Weirder: How Climate Change and Changed the Earth.” It is not attributed to a specific reporter; perhaps because it is filled with lies from start to finish.


It starts with the biggest lie of all:  “WASHINGTON (AP) -- In the more than two decades since world leaders first got together to try to solve global warming, life on Earth has changed, not just the climate. It's gotten hotter, more polluted with heat-trapping gases, more crowded and just downright wilder.”
The Earth is in the 19th year of a natural cooling cycle, the result of a comparable cycle on the Sun which is producing less radiation to warm the planet. What astounds anyone who knows this is the article’s assertion that “It's almost a sure thing that 2014 will go down as the hottest year in 135 years of record keeping, meteorologists at NOAA's National Climatic Data Center say. If so, this will be the sixth time since 1992 that the world set or tied a new annual record for the warmest year.”
Would government agencies that are beholden to the existing administration for their budgets lie to the public? Yes, they would. While all fifty states experienced freezing weather within the past month, we are still being told that 2014 set new records for warmth. To borrow a phrase from Jonathan Gruber, the architect of ObamaCare, the government can tell “stupid” voters and others anything it wants in order to achieve its goals.
For the record, in 2013 and much of 2014, there have been record low numbers of tornadoes and hurricanes. There was a record gain in Arctic and Antarctic ice. There was no change in the rate of sea level rise; something measured in millimeters.  The weather is the weather and that includes dramatic events such as blizzards or droughts, but it is hardly uniform. Depending on where you live on planet Earth, you will experience it differently on any given day.
As representatives of 190 climate mafia meet in Peru, you will be given data about carbon dioxide (CO2). The AP article cites increases of  “60 percent.” If that were true, it would be good news. All vegetation on Earth depends on CO2, just as humans and other living creatures depend on oxygen. More CO2 means healthier forests and greater crop yields, an agricultural bonus in a world that needs to feed seven billion people. But it’s not true. Nor is the claim that the mere 0.04% of CO2 in the Earth’s atmosphere traps so much heat we’re all going to die. It doesn’t and most of us will die of old age.
As Amy Ridenour of the National Center for Public Policy Research reported in June, “The U.S. already leads the world in CO2 reductions and is a great role model. U.S. energy-related CO2 emissions fell 12.6 percent between 2005 and 2012, thanks to technology and conservation. Worldwide, CO2 emissions increased by 17.7 percent during the same period.”  That’s a far cry from the AP claim of 60 percent.
The Peru conference is another effort to impose a global tax on “carbon” and to increase the UN’s “Climate Fund” to which some nations have pledged $9.3 billion. To put this in perspective, the United States just set a new record of $18 TRILLION in debt and cannot afford to be pledging money to that fund or any other fund. Most of that debt has been incurred during the one and a half terms of Barack Obama who just happens to be telling everyone that “climate change” is the greatest threat to all life on Earth.
“Climate change” is what the 4.5 billion-year-old Earth has been doing during all that time and will continue to do. Humans experience it as the “weather” which is measured in days and weeks while climate is measured in units not less than thirty years and more often in centuries. Today’s weather prediction is good for, at best, five days and is subject to change at any time.
As for all those claims about “global warming” it’s worth keeping in mind that not one of the computer models cited to prove it has been accurate. There isn’t a model or a computer big enough to take in all the many elements that compose the weather anywhere and everywhere on Earth. The weather is always in a state of flux and change, just as the temperatures during any hour of the day are in a stage of change.
Here’s a bit of advice. Do not believe anything that comes out of the UN conference because, scientifically speaking, it will be a lie. And don’t believe anything the Associated Press reports on “climate change” because that too must automatically be regarded as a lie as well.
Whatever Barack Obama has to say about “climate change” (formerly known as “global warming”) is a lie. It would be nice to have a President and a government we could trust.