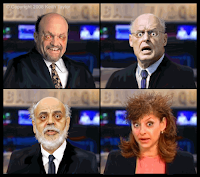 I don’t know about you, but I have reached a point where, if someone is introduced as an expert on anything, I am almost automatically skeptical. Our popular media is filled with experts on politics, investing, dieting, and every other topic.

The problem is in knowing which one of these people really knows what they’re talking about or are just promoting themselves? Odds are, they’ve got something to sell you.

For example, there’s the phenomenon of “group think” where everyone coalesces around the most popular “truth” and puts in their two cents worth of advice on the topic. Did anyone foresee the collapse of the sub-prime mortgage market? Yes, a few people did and they were ignored by Congress.

Even Alan Greenspan spoke cryptically of “irrational exuberance” a dozen years back, but no one ever claimed to know what he was saying with regard to the economy. The last thing I heard from him was an apology for getting things wrong.

I saw Henry Kissinger on PBS television with Charlie Rose the other night. For the life of me, I have no idea whether his views, always cryptic, are any more valid than mine. The man gets paid for representing the interests of clients like the People’s Republic of China these days. Should I be wary? Yes; especially since I don’t know who his other clients are.

I am a long time book reviewer and I could build a stack several stories high of books on how to get rich. They’re published by the dozens every year. Their authors, we’re told, got rich and are sharing their secrets with the reader, but how many of those readers ever get rich? Or even try? Not many I suspect. And why would the author want to share his secret unless it was to get you to invest in his company?

Today I received a news release from “the Internet’s fastest-growing career site” purporting to identify the “job sectors and key professions that are most likely to grow as the result of President-elect Barack Obama’s economic stimulus politics.”

For one thing, Obama says he wants to throw billions at our present crisis to create “green jobs” and rebuild America’s infrastructure. Where is he going to get those billions when the U.S. is already billions in hock? As of October 1st, the budget deficit for the previous fiscal year was a record $438 billion. That was $25 billion more that the previous high in 2004.

Meanwhile, the news release says the new hot jobs will be all kinds of engineers. Good news for engineers, but it is so costly to get those degrees (and any other kind) in the United States that companies here have to import engineers from other nations. That’s why so many of our government laboratories and university faculty are populated with foreigners.

The “experts” we all sent to Congress and the “experts” over at the Securities and Exchange Commission all managed to miss the signs of an imploding economy or the massive $50 billion Ponzi scheme run by some Wall Street mobster. And he snookered people like Sen. Frank Lautenberg (D-NJ), an octogenarian who will be in his 90s if he lives to see the end of his new term. And he gets to vote!

The classic example is the person who tries to do his or her own pest control when they discover they have ants, cockroaches, or a rodent problem. It can’t be done even if you can buy pesticides at the local Home Depot. That’s why pest control firms nationwide stay in business. It’s a profession that dates back to the Middle Ages!

We are all conditioned to listen to other people. Sometimes they’re called experts, but other people have their own agenda, so do your own research.

Lastly, if you believe you possess a reasonable amount of common sense then trust your own judgment. You can actually be in charge of your own life if you exercise some personal discipline and question the wisdom being handed you by some expert.
Posted by Alan Caruba at 3:13 PM