No Peace in Bethlehem 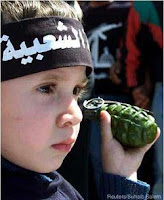 Not only has there been no sense of outrage over the Islamofascist attacks in Mumbai, India that began on November 26 and lasted until the 29th; the event that took the lives of 170 people and wounded hundreds of others has quickly receded to being just one more atrocity in the name of Allah.

As the world looked on, the perpetrators were referred to as “gunmen”, “militants”, and “extremists”, but rarely as the jihad terrorists that they were.

If you cannot name your enemy, you can never really defend yourself against them or go on the offense against them.

One specific target in Mumbai, a city that is home to thirteen million Hindus and Muslims, was the Chabad Center, a gathering place for Jews where Rabbi Gavriel Holtzberg, his wife, Rivka, and others were slain. Only the bravery of their child’s Indian nanny saved their infant son, Moshe, now orphaned as one of the Jews that far too many Muslims want to exterminate.

In a personal post on the Carter Center website, former President Jimmy Carter reported on a meeting in Damascus, Syria, with Khaled Meshaal, the leader of Hamas, one of the two factions claiming to represent Palestinians. The occasion was the anniversary of the founding of Hamas. Carter noted that Hamas was “putting all their eggs in Obama’s basket” to secure their objectives, while failing to note that the destruction of Israel is its primary objective.

Carter also took time to lament that Hezbollah, another Palestinian terrorist organization, lacks missiles to “defend” itself from Israeli aircraft after a visit to Lebanon. You may recall that Hezbollah initiated a war in 2006 against Israel by capturing an Israeli soldier and then by raining down hundreds of rockets on the northern region of Israel. These days, the Israeli overflights provide UNIFIL, a United Nations “peace keeping force”, with ample evidence of the weaponry being smuggled into Lebanon from Syria. UNIFIL has done nothing to stop the traffic and, at the first shot fired, will withdraw its forces.

That’s because, since 1947 when the Jewish state was declared and immediately attacked by its Arab neighbors, the United Nations has passed more than a hundred resolutions concerning the Palestinian refugees that resulted from that war. Not one resolution has been passed regarding Jewish refugees that were forced to flee from Arab nations, often where their families had lived for generations.

Bethlehem, the site of the birth of Jesus, is an active center for the other Palestinian faction, Fatah, which was driven out of Gaza at gunpoint by Hamas. This occurred after the Israelis had unilaterally withdrawn, forcing its Jewish residents to leave. It has been the launch ground for hundreds of rockets against Israel ever since.

Writing in a recent issue of U.S. News & World Report, contributing editor, Harold Evans, took note of how Fatah’s television station and in its schools, Palestinian children are taught that suicide bombing is much to be desired. “Martyrdom is bliss.” As Evans points out, “Children being taught murder by rote is child abuse, a mental deformation more damaging than physical injury,” adding that “This endlessly fraudulent education has had devastating effects on the prospect for peace.”

These “refugees” are now into their fourth generation because none of the Arab nations surrounding Israel would accept them as citizens, confining them for sixty years in slums called camps. Who oversees these camps? The United Nations. Who funds much of UNRWA’s efforts? American taxpayers to the tune of billions of dollars thus far.

By contrast, since 1948 Israel has taken in more than 850,000 Jews driven from Arab nations. The Palestinian refugees have swelled from approximately 650,000 to some five million, all seething with hatred toward Israel, pawns of Arab nations, and providing a reservoir of terrorists.

The United States and its allies must name terrorists anywhere and everywhere for who they are. They’re not militants or extremists. They are the cold-blooded Muslim killers of innocent people in Mumbai, in Bali, in Haifa, in London, in Beslan, Russia, to name just a few places, and, on September 11, 2001, in New York and Washington, D.C.
Posted by Alan Caruba at 10:40 AM

I often wonder why "the rest of the world" doesn't understand that what happens to Jews first will sooner or later happen to them.

When I look at former President Jimmy Carter, I see a candidate for the most egregious abuse of decency and truly treasonous actions imaginable by a former leader of our country!
People I know from the Middle East are quick to point at Carter as the main cause for the rapid rise of extremism in that sector of the world. Iran, Syria and their proxies should have shrines built for the man!
While the complexity of the regions conflicts cannot be blamed on any one leader, Carter has definitely been like an accelerator poured upon a smoldering fire.
The size and scope of the problems and the inevitable attack for the complete destruction on the Jewish state seem to be integral in the cold soul of Carter.
Mr. Obama seems to share in Carters anti-Semitic views and those Jews whom allowed themselves to be duped by the narcissist Obama may realize all this too late!

Considering all the swooning over Obama by the media and his followers, a lot are going to have reason to wonder why they were not more skeptical of a man whose name is Arabic and who spent his formative years being raised as a Muslim.

It does not bode well.

I happen to be moving from New Jersey to Jerusalem in 4 days, and am extremely worried about the escalation of rockets being shot into Israel from the Gaza Strip this week. I have many friends that live in Israel, one who spends most of his time volunteering to help shock victims in Sderot. The descriptions he gives me are beyond frightening. I respect human life, and the notion that every human being should not have to live in fear of being killed at any moment. I wish I could say the same of the Jihadists seeking their 72 virgins...

Keep in touch, Dani, and share your experiences and observations with other visitors to this blog.