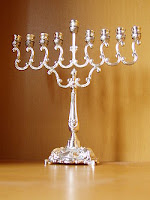 Hanukah began at sundown Sunday evening. A friend of mine points out that all Jewish holidays begin at sundown because the ancient Jews didn’t have watches or clocks; just the sun that rose reliably in the morning and set in the evening. That’s how time was told for centuries.

By watching the heavens, the ancients got pretty good at developing calendars to know when each of the seasons began.

Hanukah celebrates the reclaiming of the Jewish temple in Jerusalem from the Assyrians and its reconsecration in the second century BCE. Oil was burned for light and, as the story goes, there was only enough for one night, but it lasted for eight. As miracles go, it’s not an especially big one.

The real miracle, of course, is that a people—the Jews—can trace their history back 3,500 years and that their religion was re-written as the basis of two of the world’s major religions. At the heart of Christianity is the story of a Jew named Jesus, his disciples, and the virtual creation of the faith by a Jew named Saul—later called Paul—who enjoyed Roman citizenship. He was educated in both cultures. The longing for a messiah had been around a long time by then.

Historians attribute the stubborn refusal of Jews to yield to Roman rule as a key factor for the downfall of the empire. Some nasty work by barbarians finished it off. In 70 AD, the Romans disbursed the Jews and many found sanctuary in Babylon. The mutual history of the Persians and the Jews goes back to those times and was always one of tolerance and friendship until Islam was introduced there. Some Jews still reside in Iran today though I would not want to trade places with them or the Baha’is, another persecuted minority. If you want to visit a beautiful Baha’i temple, you will find one in Haifa , Israel.

At the heart of Islam is a profound hatred of Jews and, not surprisingly, of Christians. Mohammad warned Muslims not to take either as friends saying, “they are only friends to each other.” Well, Christians do not have a very good record of friendship as far as Jews are concerned. In one of the most Christian of nations, Germany, at the midpoint of the last century, they tried to round up every Jew in Europe and kill them.

If you want a miracle, I suggest the reestablishment of Israel sixty years ago after centuries of life in the Diaspora was as great a miracle as one can imagine in modern times. Jesus was one Jew sacrificed for his faith in his day (the story that the Sanhedrin gave him over to the Romans must be taken with some skepticism. Jews would not have turned their co-religionist over to pagans.) But then, the New Testament was written decades after the actual events.

Today’s Israel came into being only after the sacrifice of six million innocent souls. Surely the religious scholars can find a miracle in that if they look hard enough.

And, of course, the Muslims were and are the most opposed. If the Jews could reconstitute Israel after two thousand years, what does that say of an Islam that wasn’t invented until a thousand years after Judaism and seven hundred years after the advent of Christianity?

It was during the Maccabean Revolt that the temple in Jerusalem was recaptured. The Jews were not a passive people. They knew how to put up a good fight. So Hanukah, a relatively minor celebration in Judaism, is really about a military victory as much as the story of the oil lasting longer than expected. That’s not unusual in history which is mostly about battles won and lost.

A new war has been declared against Christians and Jews by a fundamentalist element of Islam. It’s not a war that should be taken casually. It well may be, however, that the war will transform or reform Islam in significant ways. That, too, would be a miracle.
Posted by Alan Caruba at 5:50 PM

I am normally among your most ardent of admirers. But today I fear you have smoked a little too deeply on the Kool Aid hookah. You state: "But then, the New Testament was written decades after the actual events". In some cases, yes. But focus on John, who was present at the Crucifixion, and who wrote a substantial part of the New Testament, including those parts you find difficult. Please remember that every Apostle was martyred in a most horrific way, rather than renounce his belief in the Jesus Christ in whose ministry each had shared for three incredible years. That is solid belief and absolute commitment.
There are as many different shades of "Christian" as there are leaves in a forest. True Bible-believing Christians love Israel, and are sharply aware that the Jews will remain God's Chosen People for all of time. Please don't be misled by the host of false teachers, so many from within, that blight Christianity.

I am not a biblical scholar, but have read widely in Jewish and Christian history. It is my understanding the the Book of John is believed to have been written at least 120 years after the crucifiction and was possibly authored in Egypt.

What matters, however, is faith and what matters more is that, no matter what religion, that one lives a moral life. By that standard I accept all faiths with the exception of Islam which I believe to be a cult built around the life of Mohammed.

Great post Alan! Just wanted to voice a few quick points: (1) Jewish holidays begin at sundown because of the belief that "days" actually begin at night (hence the Sabbath starts Friday night) after the biblical phrase "and it was evening, and it was morning, the first day" in Genesis.

(2) There have been many Jewish victories that are not holidays. The reason Hanuka is highlighted as a victory is because it was a theological victory as much as a military one. The occupying Seleucid Greeks banned circumcision in the land of Israel because they felt it was a defilement of the naturally beautiful human body. They also made their gods womanizers, murderers, and full of human failings - views that opposed that of Judaism's. Hanuka is celebrated because it represents the notion that Jews have been around a long time, seen many societies come and go, and continue to cling to their divinely defined constructs of a society with unparalleled fervor. Only, everyone keeps telling them they're mistaken, until they themselves are a matter of history.