Why Aren't US Mosques Burning? 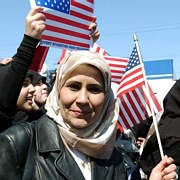 Here’s a question worth asking. Why didn’t 9/11 initiate a nationwide retaliation against the many mosques in America? Why were America’s Muslims relatively free of widespread individual acts of retaliation?

And since then, despite the fact that U.S. troops have been engaged in a long-term insurgency in Iraq, as well as fighting and dying in Afghanistan, why has the Muslim community in America been, in a sense, protected? Or at least free of being blamed for what their co-religionists are doing around the world?

Frankly, the answer should make you very proud of America.

It has a lot to do with a nation that has a Constitution guaranteeing the right to practice one’s religion without interference, but it also has a lot to do with the liberal notion of “diversity” in which all cultures, races, and belief systems are deemed to be of equal value and merit. In reality, they are not equal nor comparable. Some cultures, like our own, are unique and are superior to others.

And, yes, we do have our protests in the streets. Of late, gays have marched in Los Angeles and, before that, illegal immigrants! In the 1960s, blacks marched for equality and they got it!

It helps that Muslims are still a true minority in America, numbering about 4,749,632 at the last census. In dramatic contrast, however, in Muslim nations Christian Arabs find themselves under constant attack and many, like Jews, have been forced to flee for their lives. As often as not, they found refuge in Israel.

For a nation engaged in war in two Muslim nations and a general “global war on terror”, the protective response to “our” Muslims is nothing less than remarkable. You won’t find this kind of tolerance elsewhere. On the occasion when a new Muslim immigrant attempts to impose his cultural biases, it is usually vocally resisted. "This is America, pal, we don't do that here."

France has responded to problems with its Muslim population by banning the wearing of all religious symbols whether it be the veil, a crucifix or a Star of David. European nations with large Muslim populations have been slow to respond on the level of public policy to the problems they represent. London has seen bombings. Paris was subjected to weeks of rioting and property destruction. This is what military professionals call “a fourth generation war” in which the citizens of an invading or host nation are gradually induced to avoid confrontation.

It is no small irony that, in many Muslim nations, the attacks such as those in Mumbai, India are evoking a greater revulsion than did 9/11. Writing in The National, a newspaper published in the United Arab Emirates, Sultan Al-Qassemi, had this to say:

"It is not enough for moderate Muslims to be revolted by the attacks in Mumbai as we have been revolted by the attacks on the New York office towers, Amman wedding, London transport system, Madrid trains, Beslan school, Jerusalem pizzeria, Baghdad markets and numerous other places. It is time to take a serious stand against these perpetrators and reclaim our religion.”

“Muslims must be more vocal in their sentiments regarding such criminals, and Islamic states must counter this behavior [forcefully]. To borrow an unpopular phrase, the Islamic states must launch a psychological preemptive strike against these terrorists, and, more importantly, [against] those who encourage them. Muslim preachers who fail to condemn terror must either be reeducated or discredited completely, and those who excuse terror [by] using certain conflicts as a pretext must be silenced, because the poison that they spread today will come back to haunt us all tomorrow.”

Thus, if change is to come to the Middle East, it will have to be from within and reflect the general opinion of the public. In nations where the public plays almost no role in self-rule, that change is likely to come more slowly than we would prefer.

It is significant, too, that America has not been attacked again and one suspects that some in the Muslim community have been cooperating with our law enforcement and national security agencies. That makes them patriots.

In a very real way, Americans should take pride in the restraint they have shown with regard to the Muslims among us. Clearly many of them take pride in being Americans.
Posted by Alan Caruba at 2:41 PM