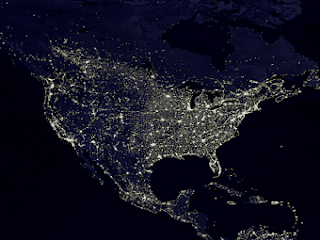 I cringe every time I hear President-elect Obama and the group of global warming maniacs he has assembled to run the nation talk about creating millions of “green jobs” based on solar and wind energy.

These are two of the least practical and most expensive ways to generate electricity for a nation whose population exceeds three hundred million people requiring billions of kilowatt-hours of electricity. Still don’t get it? Just look at a satellite photo of the United States at night!

But solar and wind energy is virtually free, right? You don’t have to pay anything for sunshine and wind, right? Wrong! If it was free or even affordable, there would be no need for huge government subsidies—your tax money—and mandates on utilities to include solar and wind energy. Without them neither solar nor wind power industries could exist.

I lived in little Maplewood, New Jersey for more than sixty years until a raise in my property taxes rendered my home unaffordable for an aging retiree. I moved to an apartment complex one town over. Other than the rent, my utility bills for electricity and heat are laughable compared to the upkeep of my former home. I don’t shovel the snow. I don’t mow the lawns. I have access to a large pool, a well-equipped fitness center, and even a business center equipped with computers.

The local weekly covers the news of my former hometown and the one in which I presently reside. On the front page of the December 24 edition was an article, “Solar panels on library vetoed.”

“Maplewood officials shelved plans to install solar panels or slates on top of Memorial Library. Harvesting solar power was seen as a way to save electricity and earn the township a little money by selling renewable energy certificates.”

Anyone buying “renewable energy” or “carbon credit” certificates is just throwing their money away. In the real world, they aren’t worth the paper they are printed upon, but utilities in New Jersey and nearby States are required by law to spend millions on them instead of being able to invest that money in upgrading their electrical grid and other maintenance.

“But the cost of the solar technology would have added $200,000 or more to the cost of replacing the facility’s roof. They also found they could save more by better conserving energy inside the building.”

I have read estimates of the cost of putting solar panels on one’s home that conclude you’d have to live there thirty years or more to ultimately earn a savings in energy use comparable to the initial cost of installation.

The U.S. Energy Information Administration released an estimate that, by 2030, solar power might be providing about 5 billion kilowatt-hours of electricity per year to American consumers. By contrast, the agency expects that conventional coal-fired plants will produce 3,351 billion kilowatt-hours of electricity. By any comparison available, solar is possibly the most idiotic way to produce electricity. With the exception, that is, of wind power.

Solar energy, except in limited uses, is one of the great scams of the environmental movement. It is also one of the cornerstones of the incoming administration’s plans to combat a global warming that hasn’t been happening for a decade.

Our economy is going to hell at the same time the incoming administration is laboring under the delusion that it can create millions of “green jobs” plus throw billions at various environmental projects to prevent a Depression.

You are looking at a serious act of madness and deception at the worst possible time.
Posted by Alan Caruba at 1:55 PM

I am not a "greenie", but I know the need for benefit for each homeowner to be independent from the power companies. Are solar panels and wind turbines expensive. Yes, but only because production cost of the panels and turbines are high, and retail sellers are trying to make a "killing" on sales and installation. When the cost is lowered and it becomes possible for the homeowner to do his own installation will solar be cost effective. They will always cost something, homeowners want it free and that wont happen.
Being off the "grid" offers more benefits than just cheap power. If I can heat and cool my house without paying always rising utility bills, then I'm ahead.
Coal burning power makers have been subsidized by the U.S. So I say have the U.S. subsidize the homeowner who puts up solar energy, let there be millions of homes using solar and wind, then let us see which is more efficient, coal or solar, wind.

i really impress with you blog and plz keep writing for this blog.

@Larry, I don't want to burst your bubble, my friend, but you should read up on this year's EPA news. They lost a court case and have MASSIVELY changed their approach to CO2 'pollution'. From their new viewpoint "If it makes CO2 it must be gauged and taxed.". So 'getting off the grid' won't mean much because every other product will be taxed. And for many people in some neighborhoods and nothern climates it's almost completely out of the question.

BTW, the US does subsidize solar and many states also chip in.

That is soooooo laughable! Doesn't anyone know that most of the 'green jobs' has been long done overseas, and without TITIANIC levels of federal subsidizing and strict regulation 'green jobs' have no future in the US.

Plugging the 'job export' hole needs to come before new jobs can be made.