Cheerful Remarks at the Funeral 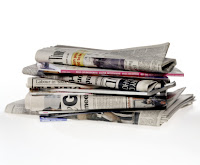 I have been a member of the Society of Professional Journalists for more than twenty-five years. Not long ago they sent me a lapel pin to commemorate my devotion to the organization which has, I must admit, mostly consisted of paying my annual dues. I have long since lost my youthful enthusiasm for the profession, but not for writing.

Like Mark Twain, I drifted into journalism because I was seriously opposed to having to actually work for a living. One of Twain’s classic quotes was “Get your facts first and then you can distort them as much as you please.” A pretty fair definition of journalism in his times and ours.

I began to have early doubts about the rigors of being a journalist when, three months after I joined the staff of a weekly newspaper, the first I had ever worked for, the editor moved on to a daily and I was anointed the editor. That’s right. I went from rookie to head honcho in about 90 days. I virtually wrote that entire newspaper for well over a year or so and probably learned as much as any four-year curriculum at the Newhouse or Columbia School of Journalism. Then I moved on to a daily newspaper.

In the December issue of “Quill”, the SPJ magazine for its members, the new president, Dave Aeikens, used his page for a commentary titled, “Our profession is not dying, it’s just changing.” My thought was that he was making some cheerful remarks at a funeral. The name of the magazine tells you how outdated newspapers have become in a time when the digital version of your favorite source of news can be accessed in Ulaanbaatar, the capital of Mongolia

Indeed, Aeikens mentioned highly trafficked news websites such as CNN and The New York Times, but managed to neglect mentioning that Fox News was in the top ten. And therein lies the problem. The new media is so wedded to its liberal agenda that it can’t even manage to mention that the newly indicted Governor of Illinois is a Democrat, but on the same day they did not fail to include that Larry Craig, the Senator who got into trouble for unseemly behavior in a men’s room, is a Republican.

The game is up for the mainstream press. The Internet constantly reveals how they distort the news and how they print news that is too often unsubstantiated boldfaced lies such as telling us that global warming is real or that the U.S. can be “energy independent”, or that “biofuels” made from food sources can replace gasoline, or that Barack Obama is a “centrist.”

The problem is that too many people for whom CNN, MSNBC, The New York Times, and similar liberal news outlets represent an accurate presentation of the world remain blissfully ignorant despite ample evidence that Congress has absolutely no idea what it can or should do as the latest burst economic “bubble” creates fear and panic. Thus, we are now hearing all the failed programs of the previous recessions and depressions being trotted out. Only the Republicans are opposing the most blatant raid on the public treasury in the history of the nation.

While news of failing daily newspapers is now a daily occurrence, permit me to suggest that the problem goes beyond the loss of classified advertising or slashed display advertising budgets. Certainly they play a major role, but the print newspapers have run slap-dash into a generation that has been rendered so ignorant of history, civics, science and other essential knowledge, and is so self-absorbed as to have entire web pages and blogs devoted to themselves and networks of other nitwits, that reading the daily newspaper is just so ”yesterday.”

That is why newspaper circulation and network news viewers are sliding into a black hole where real reporters and real editors are becoming obsolescent.

The question is who do you trust? And why should anyone but a nitwit trust a news media that almost universally bought into and anointed Barack Hussein Obama as the “Messiah”? How can anyone trust news magazines that picture him on their covers as the new Lincoln or the new FDR before he has even served a day in the Oval Office?

“The role journalists play in democracy is far too important to give up on it,” wrote Aeikens. He’s right, of course. Real journalists retain their skepticism. Real journalists do not write news releases. They write the news—what they see and record—and that includes those aspects of the news with which they may personally disagree, but which must be reported anyway.

This is why commentators like myself are finding an audience searching, searching, searching for some facts on which we hang our particular take of what is occurring. We’re the ones who, if we take ourselves seriously, actually document what we write.
Unlike myself who has a pedigree in journalism, most come to what they write based on expertise in many other areas of a very complex world.

I will predict that weekly newspapers will weather the storm breaking over the daily newspapers. The best news is always local news. Some smart fellow will set up a syndicate for news out of the state capital and feed the state’s weeklies.

The dailies will struggle for a while. Not all will die, but those that survive will not look like the present dailies with their endless cautionary tales of everything toxic that will kill you and every member of your family. Events in far-off places will be reduced to a few paragraphs in a single section. There will be some gossip, the movie and television listings. And, always, the obituaries.

The Internet will provide just about everything you need to know. It will do it faster. It will do it better. It will offer what today’s daily newspapers do not, a choice of whom to believe, not a predictable flow of recycled news releases and opinions.

In an era when the Nobel Prize is given to charlatans like Al Gore, people will still thirst for the truth and they are not finding much of it in today’s daily newspapers and news magazines.
Posted by Alan Caruba at 6:53 AM

It seems there is a fundamental shift away from the way the print news is obtained.
So many articles in any paper - national, big city, small town - are cut-and-paste copies of agency feeds. Newspaper output, more often than not, reflect the owner's bias. There is little in the way of genuine investigation of a particular topic to give it an individual look. Some topics are no-go areas depending on which paer one reads and some topics are no-go in any paper.
This is exemplified by the current hoax of AGW which 95% of papers have bought into with nary a whiff of an alternative view. What kind of impartial, jounalism is this. In fact it is not jounalism as we used to know and you, Alan, will know the truth better than we non-journalist.
Maybe it's a time or load factor with journalists having to toe the line to the constraints - ever mindful that they, too, have a mortgage to pay and kids to school.
All I know is that I am extremely sceptical of any MSM whether in print or on-line. Yes, people like me with some awareness of this change look to alternative sources of news and opinion for some measure of truth, some balance away from biased sources which pass themselves off as a window on the world. To most of us surfers that window is becoming increasingly opaque.

May objectivity in reporting rise from the ashes someday!

Even online, if the feed comes from Rueters or AP I expect, and receive a politically correct scrubbed global version of Tab, but I want the Coke or Pepsi full strength.
I trust little of the content and off I go to alternate sources lickity-split!

The refusal for Rueters to use the word "terrorists" in the recent Mumbai attacks had me confused as the commandos were pitted against the militants. The commandos sounded worse, though I knew better.

Truly objective fact reporting gets my dollar not easy to find these days.

My daily papers in my town won't hear me, so I do not subscribe!

Journalism has completely gone down the tubes ever since the Internet hit it's stride in the late 90's. Now 95% of all articles written are OP/ED in nature instead of just reporting the facts with precision. >:(