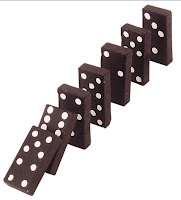 Events do not occur in a vacuum. They are a combination of decisions made at the highest levels of government that are then acted upon by literally millions of Americans, whether they are the CEOs of large corporations, small business owners, parents raising children or facing the prospect of putting them through college, skilled or unskilled workers.

These decisions then ripple out among the rest of the population as together they make a billion decisions every day “to buy or not to buy?”

We are watching the cascade effect as the astonishingly bad performance of our elected and appointed leaders in Washington, D.C. reaches into the boardroom and to the kitchen table.

This is not Bush’s fault entirely as the new administration would have you believe. The notion of social justice that caused Congress to create and later alter the role of Freddie Mac and Fannie Mae has resulted in billions in bad mortgage loans that were made because banks and mortgage companies were literally required to make those loans to people who otherwise would not have qualified to receive them. These, in turn, were then “bundled” as assets.

There was no way to trace such “assets” back to the original holders of the mortgages who, in turn, put in motion an increasing number of foreclosures. This destabilized the entire financial system and the result is the present crisis.

There is one way that is well known to economists and others who studied the Great Depression of the 1930s to restore equilibrium and confidence. It is to cut taxes dramatically in order to put money back into the pockets of wage earners. Despite promises to cut taxes, how this is done and on whom the burden will fall most will determine its success or failure.

The current “stimulus” act is little more than a government budget bill whose purpose is to grow government; it has been occurring since the 1930s when the FDR administration created bureaucratic entities in a desperate effort to somehow “control” the economy.

Farmers then and now were paid not to plant crops. Unions were encouraged to demand and receive wages in excess of what manufacturers could afford to pay. Manufacturers were given the opportunity to collude together to set prices. In addition, the FDR administration imposed countless excise taxes on everything from cigarettes to movie tickets and long distance calls. The consumer’s pockets were picked to fund big and bigger government.

The free market was literally abandoned and with it came a depression that lasted from 1929 during the administration of Herbert Hoover through the elections of FDR until the advent of America’s entry into World War II in 1941. The war required the mobilization of the entire population to fight in two theatres, Europe and against the Japanese.

We have questionable government agencies that have been instituted by both liberal and conservative presidents. The Department of Education is arguably unconstitutional. There is not a single word in the Constitution authorizing the federal government to administer education. Likewise, the Department of Energy does little more than distort the marketplace as Congress thwarts the discovery and extraction of vast energy reserves available domestically and off the nation’s continental shelf.

Layer upon layer of government interference with the free market system that generates wealth and encourages innovation have brought us to this perilous moment.

Within less than a month, President Obama has gone from saying government is the answer to the present crisis to saying that the business community, through the creation of jobs, is the answer. What, in fact, does he believe?

The government’s answer is a $819 billion distribution of federal dollars, mostly to government agencies and, in some cases, to programs of extremely dubious merit. Economists including the government’s own analysts all assert that these billions will not find their way back into the pockets of taxpayers and consumers. At best, these billions upon billions of dollars will not have any effect for years.

Those federal dollars come from two sources, the working population in the form of taxes and from increased borrowing by the U.S. treasury. Stressing both to their limits will further exacerbate the crisis and imperil the value of the U.S. dollar.

America has never been more vulnerable to its enemies. Iran is demanding an apology for past “crimes” against it. Russian naval ships are docking in Cuban ports. The Mexican border is the battle ground of narco armies warring with one another.

The greatest economy, approximately $14 trillion annually, is in serious trouble and the elected leadership of the nation is repeating all the errors of the 1930s. The prospect is not good, nor is it short term. It is a cascade of debt, foreclosures, job losses, and bankruptcies.
Posted by Alan Caruba at 1:24 PM