Promises Made, Promises to Fear 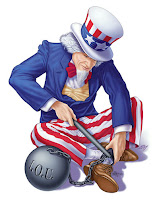 Promises are the currency of politics and politicians have been making them from the time that people banded together in tribes for a common purpose. The purpose of the politician, however, is always the same; to gain power and to stay in power.

There’s a reason we parse every word in an inaugural speech and keep records of the promises made to get to get elected. They are one sure way to map the intentions of the new President and, in time, to determine his success or failure rate.

There are any number of very good and valid reasons why those with a conservative approach to policy and politics are concerned about President Obama. We need to remember his promises and hope that some of them do not come true.

It seems to me that his promises give us cause to be fearful regarding his apparent belief that the Earth is warming and coupled to that are his views about energy use. Lastly is his “global” view of the world as a place where global institutions like the United Nations should be granted powers that supersede the sovereignty of our nation.

Nations like people make alliances based on their perceived best interests and their hidden agendas. The United Nations, a repeat of the failed League of Nations, has become a vast cesspool of corruption and a platform for the ugliest propaganda from its Muslim nation members. Created to avoid military conflicts, it has never achieved that lofty goal and has, as often as not, been used to justify them. It should be abandoned by the U.S., but Presidents seem fond of making speeches there and, when possible, to manipulate it.

In his inaugural speech, President Obama made one brief comment about the need to “roll back the specter of a warming planet.” The planet is cooling, not warming. Spending a dime on “global warming” is a waste. Instituting programs to reduce the generation of carbon dioxide based on the false assertion that it causes “global warming” will endanger our already damaged economy.

Telling Americans that “We will harness the sun and the winds and the soil to fuel our cars and run our factors” borders on a terrible ignorance about the inefficiency of solar and wind energy---barely one percent of all electricity used in the nation---demonstrated by the need to subsidize and require both to ensure their use, and a lack of reality regarding the enormous reserves of coal, natural gas, and oil this nation possesses, but refuses to access and use.

Like all politicians, President Obama made scores of promises while on the campaign trail. All agree that his administration’s first priority—perhaps its only priority—is to restore our financial system to credibility and liquidity. We did this to solve the savings and loan crisis in the 1980s and practical steps can be made to correct the present crisis. Reducing the tax burden on individuals and businesses is one of the known solutions. Eliminating wasteful government spending is another; ending the practice of “earmarks” is now essential.

President Obama is on record promising to eliminate unnecessary programs, i.e. spending. He has promised that he wants to lower the budget deficit. All this is good and all this has been said by a long line of previous presidents.

He has also made many promises regarding the environment and energy, any one of which could cost billions, drive up the cost of everything, and undermine any recovery. Among these promise is the reduction of electricity demand by 15 percent by 2020. He has promised to increase fuel economy standards four percent each year. He favors plug-in hybrid cars. He is a big fan of “renewable”, wind and solar, energy and would require that ten percent of electricity be produced by it by 2050. Lastly, he has promised to reduce greenhouse gas emissions 80 percent by 2050.

The good news is that, were he to win a second term, he will still be out of office in eight years. The bad news is that, based on his environmental and energy promises, he can set in motion a waste of billions of dollars at the same time the nation is borrowing and spending billions in a vain effort to end the current financial crisis.

Unfortunately, the only "good news" in your post, our current maximum eight year sentence under Obama, could easily become a life sentence if the Dems have their way and bust the 22nd amendment. Conservatives had better unite and get behind a qualified presidential candidate soon if we have any hope of getting this country back on track.....