Hey Kids, It's a Depression! 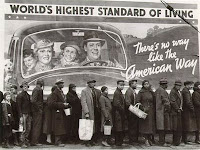 Here’s the difference between a recession and a depression as defined by Bloomberg Business News:

A recession occurs when a nation’s living standards drop and prices increase. This downturn in economic activity is widely defined as a decline in a country’s gross domestic product for at least two quarters.

A depression is defined as an economic condition caused by a massive decrease in business activity, falling prices, reduced purchasing power, excess of supply over demand, and rising unemployment.

If this isn’t the beginning of a depression, it sure feels like one. Just check the daily headlines. On Monday, the Financial Times informed readers that “Gloom deepens as 75,000 global jobs go.” Among the companies laying off people were Caterpillar, General Motors, Sprint Nextel, Home Depot, Pfizer, and Texas Instruments. My guess is the General Motors declares bankruptcy by March.

The Financial Times still called it a recession, but we know what it is, don’t we? And if we just look at the 1930s and see how every move the administration of Franklin Delano Roosevelt made only deepened and prolonged the Great Depression, we will also see what should be done, but won’t be done. Indeed, with every passing day, the Obama administration looks and sounds just like FDR’s.

As to the stimulus bill, here’s what Monday’s Wall Street Journal had to say about it:
“The stimulus bill currently steaming through Congress looks like a legislative freight train, but given last week's analysis by the Congressional Budget Office, it is more accurate to think of it as a time machine. That may be the only way to explain how spending on public works in 2011 and beyond will help the economy today.
According to Congressional Budget Office estimates, a mere $26 billion of the House stimulus bill's $355 billion in new spending would actually be spent in the current fiscal year, and just $110 billion would be spent by the end of 2010. This is highly embarrassing given that Congress's justification for passing this bill so urgently is to help the economy right now, if not sooner.”

Much, if not most, of the proposed $825 billion “recovery act” will go to various government agencies. Even a cursory review of the 600-plus page document suggests that not much of its billions will create private sector jobs. Those portions devoted to infrastructure projects are not only worthy, but polls indicate are greatly favored by the public. By contrast, the bill includes nutty energy stuff about solar and wind farms, neither of which can produce enough steady, dependable energy to keep the lights on anywhere.

Contrary to the madness that has gripped most of Congress, government spending should be cut. There is enormous waste in government at almost every level except the local level that must answer to people directly.

There should be major cuts in the tax rates from the wealthy to the lowest paid job holders. Putting money back in the hands of people will shorten the duration of the depression by stimulating purchasing, investment, and the risks involved in beginning or expanding a business of any size.

There should be a marked reduction in government regulation of all manner of business and industry in order to avoid increasing the cost of production and facilitate research and innovation.

NONE of these options, proven, known, effective, are being discussed by the Obama administration that, in office less than two weeks, is issuing executive orders that will increase the cost of manufacturing cars in the name of fighting “global warming” or “climate change.”

Apparently word has not reached the White House that it just snowed in a Middle Eastern desert nation, the United Arab Emirates, for the first time ever! That the world outside (and including) Washington, D.C. is experiencing some serious cold weather.
It’s so cold in D.C. that Al Gore’s Wednesday testimony to the Senate Foreign Relations Committee that the Earth is warming will likely be rescheduled.

While there is talk of tax cuts, it remains just that, talk.

Meanwhile things are going to hell in a hand-basket, so maybe it would be a good idea to (1) pay attention to the history and lessons of the Great Depression, (2) avoid repeating the same mistakes, and (3) not take your eye off the ball here at home with talk of finding a Mideast peace where none has not existed since the days of Harry Truman and, for that matter, all previous presidents.

The folks in Washington, D.C., being politicians, are all delusional and guess who’s going to pay the price for that? Phone, fax, email your Senators and Representative, and tell them to put the Recovery Act back on the shelf.
Posted by Alan Caruba at 1:04 PM

I call our new reality being in the Age of Pretending

Rahm Emmanuel was quoted as saying; "...not to let any crisis go to waste".
Our government spending and size is sure to grow faster than a Chia Pet in the next few months as everyone's wallet gets lighter for years to come!

An excellent post on your site. I recommend everyone read it.

Alan,
Thanks for your kind comment,
coming from you that means a lot.
I always learn by reading your articles.
I only wish I had found your writing 10 or so years ago, as I find your style of writing so admirable as you make your points so succinctly without personal attack, yet make your point you do!
Again,Thanks for your valuable kudos!

Send me the basic URL of your blog's home page and I will add it to those listed on mine. You can send it to acaruba@aol.com.

We're in the fortunate, or unfortunate depending on how you look at it, position of having a congressman who voted against the first bailout, and will vote against this one too. So, I guess we just sit here and wait to see what happens. We feel helpless ...

If we are expecting any kind of rational thought and actions from these people I think that all we need to stop and ask ourselves; is anyone making any effort the repeal the Community Reinvestment Act?

We know that this bill was the basis for the mortgage meltdown, which broke the banks, and caused this latest downturn in the world economy. In spite of that, I have yet to hear anyone of prominence say or write anything about repealing this act; which of course means that those rules still apply and we have to assume are still being enforced!

How brain dead is that?