Israel Attacks Gaza and Arabs Attack Each Other 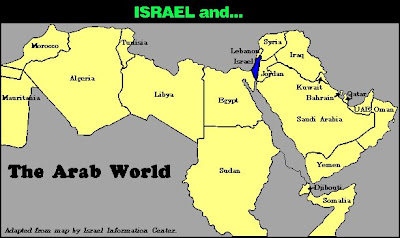 One would think that the retaliatory attack on Gaza by the Israelis would unite the Arab Middle East, but you would be wrong. Arabs are not big fans of one another.

Hamas, which drove out Fatah, another Palestinian faction, at gunpoint and with some bloodshed, finds itself quite alone in Gaza except for the usual blather about their "heroic resistance."

The level of paranoia among Arabs cannot even be measured.

According to the Middle East Media Research Institute, the General Guide to the Muslim Brotherhood, Muhammad Mahdi Akef, said in his weekly sermon, that Israel’s operation in Gaza was planned and coordinated with Egypt, Palestine, the U.S., and Israel, and that all of them had agreed with “the Zionist-U.S. agenda to assassinate the heads of the Palestinian resistance.”

On December 31, when a number of Arab foreign ministers were meeting in Saudi Arabia, Saudi Foreign Minister Prince Faisal hinted that had the Palestinians in Gaza continued the ceasefire agreement with Israel instead of lobbing rockets into it, this unpleasantness might not have happened. Responding to calls that Saudi Arabia and Egypt act against Israel, Prince Faisal replied that Arab leaders were not “adventurists” and would not engage in battle without a very good reason.

In Saudi Arabia demonstrations to show solidarity with the Palestinians were banned and they even arrested a Saudi cleric who issued a fatwa permitting the harming of Israeli targets worldwide. In Jordan, a nation with a large Palestinian population, public protests were prohibited. Monarchies tend to be nervous about large crowds in the streets.

Meanwhile, in a Kuwaiti newspaper a cartoon ran that showed Iran unrolling a red carpet for the Israeli invasion of Lebanon and Gaza, suggesting that the provocations that required an Israeli response were at the behest of Iran. The Iranians, being Persians, not Arabs, have never been trusted much by the latter and vice versa.

Egyptian President, Hosni Mubarak gave a speech demanding that Israel halt its offensive in Gaza, but he had plenty of reason to do so given the grief the Palestinians represent to the Egyptians whose border they share. Indeed, addressing the Palestinians, he said, “We warned you…that your refusing a tahdiya (ceasefire) would push Israel to attack Gaza and we stressed that thwarting Egypt’s efforts to extend the tahdiya would invite an Israeli attack.”
Gee, I wonder which side he's on?

Meanwhile, in Syria, a nation whose only friend in the region seems to be Iran, a Syrian columnist suggested that Egypt needs another officer’s revolution and accused Egypt of “conspiring with Israel to eliminate a million and a half Palestinians” in Gaza. In 1952, a coup of military officers overthrew the regime in power.

At Al-Arabiya the Director-General, Abd Al-Rahman Al-Rashed, said that Hamas was trying to evade responsibility for the Gaza conflict by attacking the Egyptian government as part of the campaign waged against Egypt by the Syrian-Iranian axis.

A senior Iranian official said that Muslims worldwide should demonstrate against their governments if they don’t support the Palestinians in Gaza and, reportedly, 20,000 Iranians signed up to fight Israel as volunteers for the Palestinians.

Iran’s President Mahmoud Ahmadinejad said that Palestinian “resistance” was in itself a victory over Israel, but neglected to mention that sixty years of resistance have rendered them the oldest existing group of refugees on the face of the Earth. On Iranian TV, toddlers were being taught about the glories of martyrdom and hatred of Zionists.

On his blog, a former Brigadier General of the Pakistan army said that Palestine needed nukes. “Nukes, missiles, atomic warheads and a strong army with a tough stance are what are required in the face of enemy like Israel and India,” said Junaid Zaman. He wondered what was taking India so long to attack Pakistan after the Mumbai attack.

This is just a small taste of what is going on in the Middle East and in other Muslim nations where the notion that Israel has a right to self-defense is met with complete astonishment. When not berating Israel, they devote the rest of their time to berating one another.
Posted by Alan Caruba at 12:49 PM

Today was the Sabbath in Israel, and all the religious soldiers were carrying their cell phones with the permission of their rabbis, in case they were called up to the army, given the pending Israeli invasion into Gaza. Many were called up, including all 4 of my roommates, and 1 other friend. Everyone in Israel is nervous about their friends and family members that serve in the army. Hamas knows they have no chance of beating Israel, but are willing to fight to their deaths to try and kill as many Israeli soldiers as they can.

May G-d be with them.

Dani, add my prayers to yours and all Israel that this conflict can be over with swiftly and that your roommates and friend can return safely and unharmed.

I am from Malaysia, a land where most are anti zionist due to lack of knowledge of Israel's history.

What astonishes me is that there is not one Israeli suicide bomber that take revenge against the Germans for the holocaust.

Anyway, may the best man win.

Yesus, if I could make any sense of your comment, I would, but there are no Nazis or Germans killing Jews these days and the entire concept of suicide bombing is totally foreign to Jewish morality and ethics. The Israelis are fighting people with no morals and no sanity.