Cuba Celebrates, But Why? 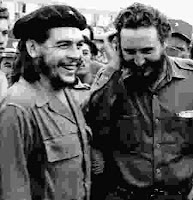 The year that I graduated from the University of Miami, 1959, Fidel Castro and his guerrilla, revolutionary forces swept into Havana to replace the dictator Fulgencio Batista with a new dictator, Fidel.

The New York Times hailed it as a new birth of freedom in Cuba because their reporter in Cuba never had a clue that Fidel was a communist. He was a “freedom fighter” and his target was the regime backed by the U.S. Even then, anything that bodes ill for the U.S. was considered by The Times as a good thing. Two years later, the U.S. slapped an embargo on Cuba that remains today with the exception of some agricultural products which, not surprisingly, must be paid for in advance.

There were a number of Cuban nationals, the sons and daughters of wealthy Cubans, who were students at the University of Miami when I was there and I have always wondered what happened to them. Those that returned made a big mistake.

Cuba, of course, was page one news when the Russians tried to put offensive missile bases there. For fourteen days in October 1962, President John F. Kennedy and Soviet Prime Minister Nikita Krushchev looked for a way to avoid World War III. Reportedly, Fidel wanted to launch some missiles, but the Russians were neither suicidal nor stupid.

I took a particular interest in events because I found myself and fellow soldiers of the 2nd Engineer Battalion, Second Infantry Division, in full battle gear and readiness to invade Cuba if necessary. The whole of Fort Benning, Georgia was ready to go to war. Fortunately, the U.S. naval blockade worked and the Russians pulled out their missiles. Shortly thereafter, I became a civilian again.

Anyone who tells you that the Russians have changed much since those days is blowing smoke up your skirt. On Tuesday, December 30, they cut off all natural gas supplies to the Ukraine. They did this back in 2006 to several European nations. Communists are essentially gangsters. They do not operate according to accepted market-based conditions and standards.

The lesson we can draw from Cuba is that communism just doesn’t work. It has never worked anywhere it was imposed or is the economic system. When the Soviet Union collapsed, the Cuban government lost an estimated $4 to $6 billion in subsidies. Cuba blames the United States for all its woes, but that’s the game every dictatorial regime around the world plays.

Along with Red China, some exploration for oil is occurring ninety miles off the coast of Florida, a State that so far has refused to allow any U.S. offshore oil exploration. What is wrong with this picture?

I’m guessing that President-elect Obama will want to get rid of the embargo and a Democrat-controlled Congress will go along with it. Cuba’s economy has been hard hit by successive hurricanes in recent years. There are some exports and there is some tourism, particularly of the sex variety which the government winks at.

Its best export were the Cubans that fled the nation when the could and even when they couldn’t.

Among the litany of disgraceful behavior with which we associate former President Bill Clinton was his return of then six-year-old Elian Gonzalez to Cuba after Attorney General Janet Reno had him forcibly seized from his Miami relatives in 2000. The child’s mother had died in an effort to bring him to America, but U.S. courts ruled that his relatives could not request asylum. It was a total failure to honor the nation’s historic role as a refuge for the oppressed.

Fidel Castro is now 82 years old and in poor health. His brother Raul runs the country. The loathsome butcher, Che Guevara, has long since been anointed the symbol of revolution communist-style. How many Cubans were executed by the “revolution” or jailed will never been known.

Cuba is the antithesis of freedom. So one has to ask, what is there to celebrate on the fiftieth anniversary of the oppression of the Cuban people?
Posted by Alan Caruba at 1:57 PM

I caught an interview between Bill O'Reilly and Ted Turner last night. I'm not sure if it was a recent interview, or one from the past year which is a common thing this time of year, but regardless, at one point, as O'Reilly was wrapping things up, he got on the subject of Jane Fonda, and her support for the likes of Fidel Castro. Ted went on to sing praise for Castro and all the wonderful things he's done for Cuba. Now, I've always known that the liberal left in this country lived in a fantasy world, but I couldn't believe what I was hearing, and neither could O'Reilly. He sat there listening in disbelief, as did I. When I hear things like that, I find myself wondering where the future of this country lies. People like Turner are feeding this crap to our children, and it seems we're defenseless to stop it....