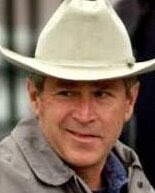 After eight years as President, we would probably be thinking unkind thoughts even if it was the Dalai Llama who held the job. In the case of George W. Bush, saying goodbye comes as a distinct relief. As with all modern day Presidents, we just have seen too much of him over the course of eight years.

I felt the same about Bill Clinton when his second term mercifully came to an end, but that feeling was also tinged with the disgust I felt then and now for disgracing the office with his White House intern antics. How and why he has found forgiveness with Democrats or anyone else still eludes me.

Reporters and others keep saying that what you see is what you get when it comes to George W. If so, he is surely one of the goofiest Presidents we have had, afflicted with a variety of mannerisms and ticks that have made him easy fodder for impersonators and comics.

I cannot shake the feeling that the man lacked seriousness or at least the intellectual depth to grasp the events and issues that came to his attention daily. There really seemed to be a “frat boy” at the core of his personality. It often seemed that, as the oldest son, he was just engaged in the family business of running the country.

Even so, I thought Bush’s response to 9/11 was right on target. Learning that Osama bin Laden was headquartered in Afghanistan, he sent the CIA and the military there to chase out the Taliban. Failing to capture bin Laden, he could have stuck to covert efforts, but he went beyond the initial action, invading Iraq for what I am sure he saw as the greater needed to draw in al Qaeda to destroy it. Simply said, he succeeded. Al Qaeda is reportedly a shadow of what it was when it attacked the U.S. in 2001. Bin Laden issues weak messages from hiding.

So, perhaps history will be more kind to him than present opinions. The rest of his eight years, though, hardly merit hosannas. He spent and he spent and he spent. He introduced legislation that only a liberal would consider; the No Child Left Behind Act, the Prescription Medicine benefits on top of a Medicare program that was already running out of money, the failure to stem the tide of illegal immigration.

George W. could just as well have been a Democrat. He leaves with a popularity rating so low that it rivals Harry S. Truman who was a Democrat. Here again, though, history has proven that many of Truman’s decisions were the right ones.

His farewell address was dignified, but not without the fumbling over simple words and phrases now so familiar to his inability to deliver a speech without these stumbles. It is not his speeches, however, by which he will be remembered, but by his enduring faith in the spread of freedom and democracy.

The result of his tenure is, after three decades of despotic control, an Iraq as a young democracy. It is an Afghanistan struggling to throw off the oppression of the Taliban, the spawn of a duplicitous Pakistan, itself struggling to be something, anything more than just another junta-run excuse for a nation. Bush has strengthened ties to India and to China. Burned by his initial confidence in Vladimir Putin, he has kept Russia bottled up to some degree.

His humanitarian instincts are seen in programs to deal with AIDS and Malaria in Africa, but his reputation will rest ultimately on his role as Commander-in-Chief. Here again, history may speak well of him in hindsight.

We may look back on the Bush43 years with some nostalgia, if not for the man, then for the fact that we did not suffer another attack like 9/11 and that you knew he would not let that happen on his watch.
Posted by Alan Caruba at 12:45 PM

You know, I had a pretty good opinion of George W. Bush throughout most of his term. The way the media and the left turned on him was disgraceful, and I wanted no part of it. I defended him often during the many heated "bash sessions" I had to endure at my local watering hole. He did nothing to disgrace the Office and our Country like Slick Willie did, and for that, I thank him. However, he lost me when he took the position he did on illegal immigration. I just can't see how anyone who loves their country as much as he says he does could possibly think it's OK to have millions of undocumented illegal immigrants streaming across our borders. His spending, and many of the other issues you mentioned angered me as well, but the immigration issue was the straw that broke the camel's back for me. Unfortunately, I'm bracing myself for the next four years, which I feel certain will make the last eight years look pretty good.

I like this blog Mr. Caruba and will be checking back often. Found you from Phil Brennan's site that I have followed for several years.

Welcome, Necromancer. Phil Brennen makes more sense once a week than the whole of the Congress in a year. He is one of the few people whose writings I bring over to www.anxietycenter.com and share with visitors to that site.

Guy, I think you spoke for many people.

Thanks for the link, Necromancer, I've added PB to my favourites and he looks impressive on first encounter. Isn't the blogosphere fantastic? All these great sites and personalities.
As for GWB, well, I hardly feel qualified to comment but he has always appeared to be an intellectual pigmy, but backed-up by the massive stature and power of his office (and his father) A clumsy, innefectual leader soon to enter into historical context. I don't see that time can make him any better than just another profligate spender of your hard-earned tax dollars.