Everybody has a Gaza Peace Plan Except Hamas 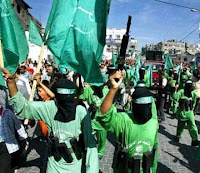 The peace plans for the Gaza strip and its political, social and military leadership, Hamas, are coming thick and fast.

Where were these plans when Hamas was shelling southern Israel day-after-day, month-after-month? Does the latest peace plan include the return of the kidnapped Israeli soldier who has been held for some two years or more? Will Hamas agree to forego its prime purpose, the destruction of Israel and the murder of its Jews?

The Presidents of France and Egypt are very worried about the fate of the Palestinians who are dying as the Israeli Defense Force (IDF), charged with the responsibility to eliminate the endless attacks on their nation, moves through the streets they once filled by the thousands while shouting “Death to Israel.”

Egypt entered into a cold peace with Israel after the 1967 war disabused them of any notion they could defeat the tiny nation. France embraced the Nazis who marched in uninvited. The lessons of history are overflowing with the simple fact that some people must simply be defeated before they reform or cease to be a threat. You cannot make deals with stone killers.

The media is full of images of dead and injured Palestinians, but where is the concern for the residents of Sderet, the Israeli city that has been under constant attack and where even the bus stops come equipped with shelters against rockets?

The United Nations, a wholly owned subsidiary of the Muslim nations, cries out against Israel, but did you know that the planning committee of the forthcoming UN Human Rights conference, scheduled for April 20 to 24, is chaired by Muammar Qaddafi’s Libya and that the vice chair is Mahmoud Ahmadinejad’s Iran? The first such conference was a farce. The next one will be an obscenity.

Throughout the Middle East, the clerics are preaching that Muslims embrace death and regard death in battle as a gateway to paradise, but the Hamas leadership is in hiding throughout Gaza while their people die because they cannot seem to find a path to peace.

If there is such a thing as fighting a humane war, the Israelis have certainly perfected it. The historic subject of inhumanity through the ages and the last century’s genocide, Israelis have an aversion to subjecting even their enemies to the horrors of war. Even so, the Israelis have been compelled from the day they declared Israel a sovereign nation to fight for its existence.

I am reminded of the story of the Jew who the Romans buried up to his neck in the arena of the coliseum and, when the lions were let loose, he bit the lion that came too close. “Fight fair, Jew, fight fair” came the shout from the crowd.

That is why those who want to burnish their reputations on the international stage are quick to shout, “Fight fair, Jew” when the Israelis seek to defend themselves. The Israelis should ignore all such peace plans until they have established a peace of their own making to their own satisfaction. It may be brief, but it will be an improvement over the constant rockets coming out of Gaza.

Peace plan? The IDF is implementing one.
Posted by Alan Caruba at 12:54 PM