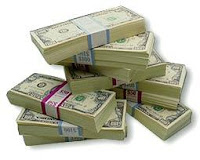 Excuse me, but weren’t we told, just before the Bush administration folded its tent, that we had to throw billions at failing banks or the entire financial structure of the nation would self-destruct?

Remember that three-page memorandum from former Secretary of the Treasury, Hank Paulson, late of Goldman Sacks, that said give me $700 billion? Trust me. Yours truly, Hank P. (And now Congress is contemplating replacing him with a known tax cheat!)

Remember how Sen. John McCain stopped campaigning and ran off to Washington, D.C. to take part in top-level meetings? And now, we hear, he will not vote for more billions in bailout money. Obama said next to nothing. Now he says we have to ruin our economy by taking on the kind of debt that no one can begin to comprehend.

There is far too much political theatre taking place and far too little of what the Constitution is designed to do; ensure that there is plenty of discussion before any fad or fancy becomes law.

I simply distrust and dislike the appeals from President Obama that say that this Mother of All Pork Bills, an alleged “recovery” act must be passed within a week’s time. That is no way to spend $825 billion and upwards of a trillion dollars. Aren’t we already deep in hock to China and Japan?

I think that there are people in the White House and in Congress who think that the best way to serve themselves—not the American people—is to panic us into accepting an extremely bad piece of legislation that is not going to “solve” anything with regard to the current economic crisis.

Why has no one apparently learned the lessons of the Great Depression and FDR’s famed New Deal? Nothing, absolutely nothing, that FDR and his merry band did shortened the Depression by one day. Indeed, they stretched it out.

Ten years after FDR had been in office, his Secretary of the Treasury, Henry Morgenthau, Jr., told the House Ways and Means Committee, “We have tried spending money. We are spending more than we have ever spent before and it does not work.”

And this is why this so-called recovery act has to be stopped in its tracks. It will spend billions, drive up the deficit, and waste enormous sums on projects such as “clean energy” (coal and solar) when this nation needs more coal-fired and nuclear plants, and an electrical grid upgrade that increases the amount of electricity to our urban centers…not to some solar farm located hundred of miles away in a desert!

Our elected representatives are treating us all like children, like fools, like so much cattle to be stampeded into running off a financial cliff that will devalue the U.S. dollar and shackle succeeding generations to a level of debt unseen since World War Two.

Do you think the present financial crisis will go away tomorrow, next week, next month or even next year?

Do you think that thousands of spending projects will make any difference when comparable efforts in the 1930s demonstrate that they won’t?

Do you think that money will actually get out into the economy any time soon?

Or do you think the government has to secure all that “toxic paper”, the loans gone bad, isolate it in a Resolution Trust, and let banks get back to making loans? It is the bad debt that has everything stalled.

The government doesn’t create jobs. Private industry and business do that, but they can’t if they can’t get the kind of bank loans that permit them to function. Failing that, they begin to lay off people.

Write, call, fax and email your Representative and Senators. Tell them to slow down, to not vote for this obscene pork bill.

As former President Reagan told us in his first inaugural speech. “Government isn’t the answer to our problems. Government is the problem.”
Posted by Alan Caruba at 11:50 AM