US Presidents DO NOT bow to Foreign Monarchs! 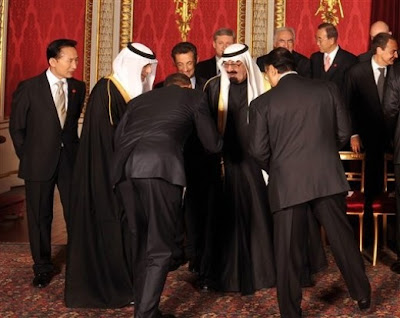 This photo of President Obama bowing to the king of Saudi Arabia is an offense to every American.
U.S. Presidents by common protocol and common sense do not bow to foreign monarchs. The entire history of America is based on a Declaration of Independence that broke with royal rule and rebuked it. Immigrants of every description came here to free themselves of the tyranny of royal rulers.
When taking an oath of office or service (mine was service in the U.S. Army), Americans vow to stand against the enemies of the nation, "foreign and domestic." What are we to make of our nation's elected leader who bows to the king of a nation that spawned the vast majority of the men who perpetrated the 9/11 attack on our nation?
And what are we to think of an American press that almost uniformly ignored this appalling act?
Posted by Alan Caruba at 8:20 AM

Alan,
This picture is misleading because it is actually a photo of the Saudi King presenting Bush with a medal. He wasn't bowing. You can see the entire video on CNN here.
http://imagesource.cnn.com/imagesource/player.swf?streamer=rtmp://isfms.cnn.com/vod&file=mp4:895/05281895&type=video&controlbar=none&autostart=true&width=480&height=324

Unfortunately, as much as I hate to say it, Obama did bow to the Saudi King just last week. I too think this was a misguided act on his part. He shouldn't have done it.