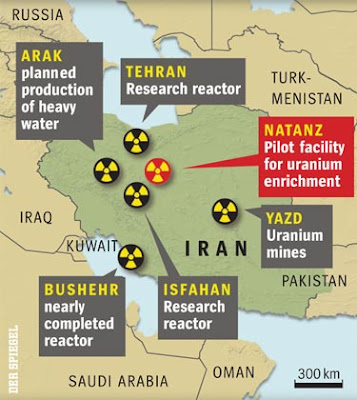 If the endgame were not so serious, I would confess to enjoying the way the Israelis and much of the rest of the world are getting ready to call the Iranian ayatollah’s bluff as they hope to avoid a military response to their nuclear quest and the threat it represents.

It wouldn’t surprise me that the ayatollahs who have had Iran by the throat since 1979 are beginning to have serious misgivings about embarking on their nuclear mission.

As the Iranian intelligence community watches the comings and goings of their counterparts, it has surely not escaped their notice that two high-ranking teams of American CIA and DIA intelligence officials were conferring with the Israelis this week, shortly after attending a four-nation intelligence summit held in Amman, Jordan. It brought together key players in the U.S., Egyptian, Jordanian, and Israeli clandestine services.

Such cooperation is unprecedented in recent years and it making the Iranians very nervous. Iranian president, Mahmoud Ahmadinejad, said of these comings and going, “Iran is a great world power whose strength is unlimited and on whom no other state would dare impose sanctions.” This is straight out of the late Saddam Hussein’s Book of Hilarious Claims.

Then, too, despite extensive economic ties with Russia, the Iranians are so upset with the delayed delivery of a Russian S-300 air defense system they actually went public with their complaints. It was expected in April.

It is a $1 billion contract and one suspects that the Russians have calculated that the Israelis will attack soon enough, so why waste a perfectly good air defense system that can be sold elsewhere? I hope they got paid in advance.

“Don’t Russian strategists realize Iran’s geopolitical importance to their security,” asked Iranian Chief of Staff, Gen. Hassan Firouzabadi. Yes, they do and so do the Chinese with whom the Iranians also have extensive economic ties, but both nations are hardly in a rush to see a nuclear-armed Iran, run by religious fanatics who might decide to threaten them or worse.

Meanwhile, earlier this month the UN International Atomic Energy Agency announced it found “nothing to be worried about” after a quick, first look at a previously secret uranium enrichment site in Iran. Are you worried? Am I worried? Certainly not, after all, Mohammed ElBaradei is a Nobel Peace Prize winner just like President Obama.

It has been reported that the U.S. has delivered a number of “bunker-buster” bombs, MOABs, to the Israelis and they are designed for use against nuclear facilities buried deep in mountains or underground.

All their bravado and boasting has only managed to get the Iranians further isolated and at considerably greater risk. Instead of sinking billions into their nuclear program, they could have been building oil refineries and other infrastructure of value. Instead, they have to import much of their gasoline. This is a definition of stupid.

The Iranians (by which I always mean the leadership, not the people) have managed to sour relations with Europe by jerking them around in an endless series of “negotiations” concerning their nuclear program. It is not lost on Europe that Iranian missile systems permit them to target much of that continent. Ditto Russia. Ditto China. Ditto the entire Middle East.

The immediate target, of course, is Israel and Israel has a history of destroying nuclear reactors in their neighborhood, first in Iraq and more recently in Syria when the combined talents of U.S. and Mossad intelligence revealed where the Syrians were building a secret nuclear facility.

There is a historic irony in this because ancient Iran, Persia, provided a sanctuary to Jews when they were exiled from Israel and facilitated their return. Modern Iran’s leaders have mocked the Holocaust and threatened the Israelis with nuclear annihilation.

All of which is to say that, if I were an ayatollah in Tehran these days, I would be thinking about opening a dry cleaning business just about anywhere else on planet Earth.
Posted by Alan Caruba at 12:01 PM

Thoughtful and interesting post, but I fear a bit optimistic.

"Instead of sinking billions into their nuclear program, they could have been building oil refineries and other infrastructure of value. Instead, they have to import much of their gasoline. This is a definition of stupid."