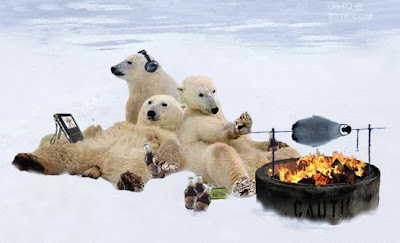 I received an email from the Sierra Club urging me to sign a petition to declare the polar bear an endangered species.

The Department of the Interior is considering this and it would cover much of the Arctic, including the sea ice of the Arctic Ocean. The Sierra Club is worried because Shell Oil wants to drill for oil in the Beaufort Sea, a part of the “critical habitat for the bear.”

So, for anyone who doesn’t think that thwarting all attempts to drill for oil in the Arctic isn’t the real reason to “save” the thriving polar bear population, the answer is that it has nothing to do with polar bears and everything to do with the primary goal of all environmental organization, denying energy sources to Americans and everyone else.

Indeed, the Sierra Club said declaring the polar bear endangered was “necessary to stop harmful activities such as oil drilling.” So I guess it doesn’t get any more plain than that.

The Sierra Club went on to blatantly lie about the status of polar bears, claiming that “survival rates for polar bear cubs are plunging.” It is common knowledge that male polar bears are known to kill cubs, but the survival rates have much more to do with the mother bear’s ability to catch ringed seals.

Ironically, polar bears’ favorite delicacy is the pups of ringed seals. Mother Nature doesn’t much care who wins the survival marathon and the Sierra Club is not calling for an endangered species declaration for ringed seals.

The Sierra Club is lying. The Natural Resources Defense Council is lying. The World Wildlife Fund is lying. They could not care less about polar bears. Their objective is shutting off access to anywhere that has oil or natural gas reserves.

In a July 2006 a report, “Polar Bear Politics: Underestimating the survival capacity of one popular bear” by Jennifer Marohasy, the Director of the Food and Environmental Unit at the Australian based Institute of Public Affairs was published. The estimate of the population is “about 25,000 polar bears existing in 19 relatively discrete populations across Norway, Denmark, Russia, Alaska, Greenland, and Canada.”

“Forty years ago, there were only about 5,000 bears, the worldwide population depressed by hunting.” In the 1970s, nations agreed to restrict hunting, resulting in the growth of the population.

The BIG LIE is that the Arctic is melting because of “global warming.” The Arctic has, in fact, “warmed” over the past two decades and there has been a reduction in sea ice, but there has been no “global warming”, only a natural cycle of warming that followed a Little Ice Age that ended around 1850 after three hundred years.

In fact, in October 2007, NASA announced the results of an in-depth study of Arctic sea ice and concluded what melting had occurred was due “a change in wind patterns” that had “compressed the sea ice, loaded it into the Transpolar Drift Stream, and then sped its flow out of the Arctic.” Wind patterns, not “global warming.”

The Earth is now into a new cooling cycle that began in 1998 and which meteorologists predict will last for several decades. What they won’t tell you is that they have their fingers crossed that it does not, in fact, signal a new Ice Age. The period between ice ages is about 11,500 years and the Earth is at the end of the interglacial period that has allowed for the rise of human civilization in the past five thousand years or so.

So, the fate of the polar bear is such that they are more likely to survive a new Ice Age than billions of humans in the northern hemisphere.

As should be obvious to everyone, the reduction of Arctic sea ice or the population of ringed seals has had no correlation whatever with the growth of the polar bear population. Indeed, if there hadn’t been a period of glaciation about 250,000 years ago and a bunch of formerly brown bears had not become isolated and had not adapted successfully, there would be no polar bears.

Further putting the lie to the Sierra Club and other environmental organization’s predictions is the fact that polar bears live in remote and inhospitable parts of the Arctic. In addition, they are not stationary, roaming over an area as large as two hundred square kilometers in search of tasty seals. Most of the time, humans can’t even visit or fly over the vast bulk of the Arctic to make any kind of count.

The Sierra Club has no idea how many polar bears actually exist in the Arctic and any claim that they are “endangered” is pure balderdash. I could use another word to describe such claims, but my Mother told me not to.

So, to sum up, the Sierra Club is LYING about polar bears and you would be well advised to take anything else they have to say with a grain of Arctic Sea salt.
Posted by Alan Caruba at 12:34 PM

Pardon?
"They could care less about Polar bears"

Don't you mean "They could NOT care less about Polar bears"

Very interesting post, made even more so by use of the word "lying".

As I say, I agree that the green left couldn't really give two hoots about furry, pretty animals, their concern is to hobble capitalism. But your post is slanderous, and they could say that your words hurt them financially, and legal action could result.

Are you prepared for that ?

They intend to get their "truth" out there and they don't care how many lies they have to tell. Lies of ommission and lies of commission. That is the greenie stock in trade.

Ayrdale: If the facts they are citing and assertions they are making are not supported by the truth, then it is not slander to saying they are lying.

The truth is its own defense.

Ever notice that every time they want to have a meeting about global warming somewhere, there's an ice storm...?

Had a nice cool summer here in Ohio.

Alexandra, it's called the Al Gore Syndrome...blizzards follow him everywhere. Proof that God has a sense of humor.