My "Interview" with Al Gore 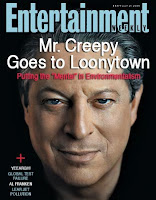 The mainstream media have been trying to find Al Gore in order to interview him about the revelations that the research data supporting “global warming” was cooked—pardon the pun.

Here is my exclusive "interview" with him. You will find the source of his quotes at the end of this Q & A.

Q: Is it true that you lost your bid to become president because of the media?

A: I don’t want to leave the impression that the media’s unwillingness to focus on the global environment was the only reason why the issue failed to ignite serious debate during the campaign.

Q: A lot of people thought you have made too much about an environmental crisis. What do you say to them?

A: For me, the environmental crisis is the critical case in point: now, every time I pause to consider whether I have gone too far out on a limb, I look at the new facts that continue to pour in from around the world and conclude that I have not gone nearly far enough.

Q: Do you still maintain that human beings are causing global warming by burning fossil fuels, driving automobiles, and such?

A: One doesn’t have to travel around the world to witness humankind’s assault on the earth. Human civilization is now the dominant cause of change in the global environment. Humankind is now changing the climate of the entire globe to a degree far greater—and faster—than anything that has occurred in human history.

Q: So, despite the fact that it’s been revealed that scientists in England, America and elsewhere; those affiliated with the United Nations’ Intergovernmental Panel on Climate Change, were falsifying their data, do you still believe in global warming?

A: The theory of global warming will not be disproved, and the skeptics are vastly outnumbered by former skeptics who now accept the overwhelming weight of accumulated evidence.

A: Siberia is one of the regions of the world that seems to be warming most rapidly.

Q: It’s that bad, eh? What role does capitalism play in all this?

A: The partial blindness of our current economic system is the single most powerful force behind what seem to be irrational decisions about the global environment. Modern industrial civilization, as presently organized, is colliding violently with our planet’s ecological system.

Q: That sounds serious, Al. What can we do?

A: The United Nations might consider the idea of establishing a Stewardship Council to deal with matters relating to the global environment.

Q: But, Al, aren’t the Kyoto Protocols based on the data provided by the United Nations Environmental Program and its Intergovernmental Panel on Climate Change? If the IPCC has been using phony scientific data all these years, maybe it isn’t a good idea to turn the environment of the Earth over to the UN. Well, let me finish up by asking how you feel about automobiles?

A: We now know that their cumulative impact on the global environment is posing a mortal threat to the security of every nation that is more deadly than that of any military enemy we are ever again likely to confront.

Q: Really? What do you propose we do about automobiles?

A: It ought to be possible to establish a coordinated global program to accomplish the strategic goal of completely eliminating the internal combustion engine over, say, a twenty-five year period.

Q: So capitalism is bad. Automobiles are bad. And human civilization is bad. No disrespect Al, but you sound loonier than a spotted owl.

All the quotes attributed to Al Gore were taken directly from his book, “Earth in the Balance: Ecology and the Human Spirit”, published in 1992.

The Earth is in a new, natural cooling cycle that began in 1998.

So far, Al Gore, winner of the Nobel Peace Prize and an Oscar for his documentary, has not been available for interviews.
Posted by Alan Caruba at 2:27 PM

We should have a little compassion for poor Al Gore. As the High Priest of the Church of the Warming Globe, and a man who loves the limelight, this has got to be an extremely difficult time for him.

I am sure that there are a lot of interviewers out there that just won't be capable of ignoring this issue and will insist on asking him embarrassing questions, and we know that Al isn't the brightest pebble in the brook, so this is going to be a difficult time in his life. Let's all just calm down and take a little time to show some compassion for Al.

He is looking even a little thicker than he has appeared before. Could he be holding his Co2 in? Maybe he will explode. It would be for the best.

That bloviating cretin is no doubt hunkering down in Fortress Gore and making a barge pole long enough to isolate himself from his pseudo-scientific bedfellows.

He has insulted us all with his bed-pan of garbage that he has shoved into the face of our civilisation - especially our young ones who have no training or experience at being able to deal with such a side-splitting comedy of errors. They are contemptable in their methods.

Gore's nearest comrade-in-arms across 'the pond' is that simpering fool of a prince, tree hugger and flower stroker extrodinaire, giving us a few months to save the planet - or else -what? brush-up on our rendering of collective Kubaya and hope that Gaia responds? Baloney.

Walking this morning in the lush, green countryside in this lovely part of the Philippines I am at a loss to see and understand this 'Mother Earth is Dying'codswallap. Sure, there are pockets of abject pullution created by insensitive and crooked operators but the greatest majority of our earth is in great shape and getting better in all its diversity.
We know all about the ulterior motives of the UN and its alphabet minions and extremists put in place because of their evil intent towards us. Another insult - do they assume we are all sheep? Roll-on more TEA parties and mass rejection of policies, whether H1N1 vaccination or Crap n' Tripe or Sustainable Development.