Trying the Sheikh to Try Our Faith 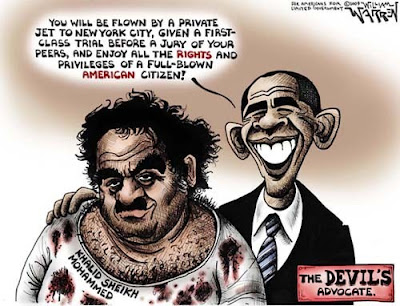 Like a lot of people, I have been pondering why the Obama administration would decide to remove Khalid Sheikh Mohammed, the mastermind of 9/11, from facing a military tribunal as an enemy combatant to being granted the full rights of an American citizen; something he clearly is not.

It has been increasingly obvious that this administration is dedicated to destroying the nation’s economy by increasing its debt, imposing changes to our healthcare system—one sixth of the nation’s economy, taking ownership in General Motors and AIG, and doing nothing substantive about a rising unemployment rate.

It has done this at an astonishing rate of speed as if it realizes it only has a limited amount of time in which to bring down America.

However, if Khalid Sheikh Mohammed is subjected to a trial, mere blocks from “ground zero” in the city that was attacked as the result of his planning, there are a myriad of ways the administration of justice—real justice—is impossible to achieve.

This is particularly evident in the statements by President Obama and Attorney General Eric Holder, both of whom are lawyers and both of whom had to know that publicly stating that Khalid Sheikh Mohammed would be tried, found guilty and executed, immediately poisoned any choice of a fair trial.

“Innocent until proven guilty” is a concept even school children learn. The right to a fair and speedy trail is another. The Khalid Sheikh Mohammed trial has already turned this on its head.

Not only has the President declared him guilty, but has publicly condemned the “torture” that was used to gain a confession and other information we’re told was vital to thwarting still other attacks on the nation.

Thus, Obama has found a way to try our faith in our judicial system. The Attorney General has put the trial in motion and he has done so, without question, because the President has directed that action. This was not some casual decision Holder made while chatting over dinner with his wife!

Whatever ensues, it will raise serious questions whether Khalid Sheikh Mohammed can find “a jury of his peers”, receive adequate defense, and, if it is deemed that Constitutional rights—to which he was and is not eligible to enjoy—set him free, what then to do with him?

It will be the worst kind of “show trial” with the verdict pre-determined in a way that is as un-American as one can get. Even Mafia don John Gotti got off several times before finally being sent to prison.

The irony is that the people of the Middle East do not have any kind of comparable system of justice and, if the state arrests them, they are fortunate to even get a trial before being sent to jail or executed. There simply is no system of “justice” in the Middle East like ours and they have no way of judging ours from their experience and perspective.

In the meantime, Khalid Sheikh Mohammed and his co-defendents will become Islamic martyrs.

But Khalid Sheikh Mohammed is not an American. If it was in his power, he would impose Islamic Sharia law on all of us. Failing that, he tried to kill as many of us as possible.

And, finally, remember that the President has the irrevocable power to pardon him!
Posted by Alan Caruba at 1:29 PM

I am enjoying the spectacle of my "Obama Lovers" justifying his every action and this trial venue change as well. Bringing up any notion of his impropriety swells necks and reddens faces. They'll get one short sentence out and then follow up with what they ALWAYS DO - "But Bush…!"
They hate Bush as much as they hate the idea of a free market economy. But they love their WalMarts and their SUVs.
Go Figure.

Again, I ask, what is it going to take to get the people of this country mad enough to take action? Bringing this trial into civilian courts is absolutely ridiculous. It's a political move, designed to embarrass our intelligence and law enforcement community, pacify the Muslim world, and further erode the morale of this country. Every stinking day, we are faced with yet ANOTHER clear sign that Osama and his administration are traitors, fighting on the wrong side of the battlefield. They are obviously doing everything they can to break down the systems and institutions that have made this country strong and secure. What, I ask, does this man have to do before people finally wake up, see him for what he is, and take a stand? I hope it doesn't take another 9/11 or worse ...

The people in new York City need to stop this circus anyway they can. If a couple million people showed up everyday at the court house, blocking traffic, stopping business, overwhelming security and other devious ways, the show might NOT go on.

Any American citizen who does not see the evil in this move needs to leave the country and quit polluting this one!

If KSM goes free, the entire country should protest, and not quietly. Needless to say, I'm furious about this, and equally furious with Obama. Talk about hating Bush....it's now their turn!

You said it Louise. But, they hated Bush for what he did to help this country. We hate Obama for what he's doing to help our enemies...

If they turn KSM loose, I hope it's on the streets of New York ... kinda like putting a child molester in prison. It would make a good reality show ..."KSM - run for your life" ...