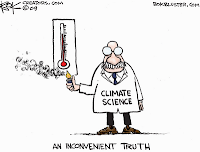 Now that some enterprising and possibly conscience-stricken soul has served up the emails and other data of the Climate Research Unit (CRU) of the University of East Anglia, revealing the deliberate efforts to hide the corrupted research that justifies the “global warming” fraud, all the various journalists and alleged climate scientists who have been a party to it are trying desperately to cover up or minimize the scandal.

Others like the U.S. “Climate Czar” Carol Browner have announced their faith in the disputed data, but Browner, who served as EPA Director in the Clinton administration has never shown any interest in honest science and is not likely to have left a paper trail in her present position. No word yet from Obama’s loony “Science Czar”, John Holdren.

The truth is, those closely allied with the United Nations’ Intergovernmental Panel on Climate Change (IPCC) have been suppressing the real science, substituting their own corrupted data, and trying to avoid the process of “peer review” by which other scientists, the real ones, can test the data for accuracy and validity.

Thousands of real scientists have signed petitions over the years demanding that global warming claims be submitted to rigorous examination.

The Heartland Institute, a non-profit, free market think tank, spent—-for them-—an enormous amount of money to put on international conferences that brought together top scientists who demonstrated how utterly false the IPCC, CRU and other data was, but the mainstream media simply mocked their effort.

Initially, the culprits at the CRU claimed that their computers had been “hacked”, but many others believe that the data and emails had already been culled by CRU insides for the purpose of removing it from any impending investigation.

In England, its Freedom of Information Act, similar to that in the U.S., had been used to demand the data supporting the global warming theory which, at one point, Phil Jones, the CRU director, claimed had been “lost.” Reportedly, Jones has attracted more than $22 million in grants to the CRU for climate research!

His colleague, Michael Mann of Pennsylvania State University, became famous for concocting a “hockey stick” graph that depicted a sudden rise in the Earth’s temperature that was later revealed to have been falsified, but these concoctions have been used for decades by the IPCC to claim that global warming is real and on-going.

The prevailing belief now is that the emails and data were already on a disk that a conscience-stricken CRU staffer decided to make available on the Internet for all to see and examine before it too became “lost.”

You can be sure, however, that the global warming journalists whose careers have been based on furthering the fraud will continue to emphasize the “hacking” theory to suggest this “stolen” data lacks merit and those using it, the so-called “skeptics” and “deniers” are still not to be trusted.

In the U.S. Sen. James Inhofe (R-OK) who has been the lone voice in the Senate debunking “global warming” has called for an investigation. Chris Horner of the Competitive Enterprise Institute, a free-market think tank, has already filed three Notices of Intent to File Suit against NASA and its Goddard Institute for Space Studies that, for three years, has refused to provide documents requested under the Freedom of Information Act.

In the United States, James E. Hansen, the head of NASA’s Goddard Institute, got the “global warming” hysteria going in the 1980s when he testified before Congress that his research revealed an incipient catastrophe if the U.S. did not significantly reduce carbon dioxide (CO2) emissions that he said were causing “global warming.” The result was that NASA has averaged more than $1 billion each year since 1995 for climate research.

Estimates of the amount of money the U.S. has spent on all manner of “research” and related programs peg the figure at $50 billion or more. That’s a lot of money for something that was NOT happening and in 1998 the Earth entered a natural cooling cycle; one in which we’re likely be for two decades more or longer.

All of this is exacerbated by the fact that the President of the United States will briefly attend the forthcoming December UN Conference of the Parties on Climate Change being held in Copenhagen. He has made it clear that he believes the false data put forth by the IPCC and wants the U.S. to sign a treaty that would yield U.S. sovereignty to the United Nations.

President Obama has repeatedly said the United States has to reduce its CO2 emissions, the mantra of the global warming liars. It would destroy what's left of our battered, debt-ridden economy.

So a major cover-up will be the objective of the U.S. news media that has pushed “global warming” for years with one scare story after another aimed at energy producers and users.

The battle now is to force the mainstream media to tell the truth about “global warming” and to find out just how many billions of taxpayers dollars have been squandered on junk climate science and policies detrimental to the nation.

As for President Obama, he should just pick up his Nobel Peace Prize in Oslo, Norway, give another florid speech, get on Air Force One, and come home.
Posted by Alan Caruba at 1:09 PM

Whatever the outcome of Copenhagen, whatever stitched up shonky deal is made, the verdict of history and of science will remain the same; climate alarmists are frauds, and their stooges within the science establishments and in the media are guilty of collusion, lies and deceit. The information is now released, and the stink and shame of corruption will follow those who wilfully choose to ignore it...

I think the Obama administration and their media buddies are fighting an uphill battle on the AGW front now. The majority of the American public already suspected that the "global warming/climate change" hysteria was just another scare tactic, and now, in light of recent developments, convincing us otherwise is going to be very difficult. We've seen it before, and we'll see it again. Now all we have to do is make it clear to our representatives that the gig is up, and that their continued support for this pack of lies will cost them their jobs ...

Well its down to people power versus big government/big business. Lets push for transparency of government and government agencies!

That the AGW scam is th platform for deeper, ulterior motives is now beyond doubt.

As the days pass after the CRU revelations and the MSM remain unmoved in their AGW conviction then it is once more beyond doubt that the MSM owners are party to these ulterior motives.

The science is immaterial to these people but only the end result of 'Change'. How else could 99% of world leaders cheer-lead such a lie
if not to their own benefit? That they, and their paid-for pseudo scientists hold science in such contempt says volumes for the future of science - and thence for the future of mankind.
Without the science of the past two hundred years leading us into a world of plenty and benefit, and culminating with such promise in our time, these evil men would rob this and future generations of all expectation as provided by science.

This depravation is the same as if mad leaders had engaged in a nuclear exchange by robbing this and future generations of the right to a fruitfull life.

God damn them for their contempt of us and our children!

Clive Graham Smale said...
"That the AGW scam is th platform for deeper, ulterior motives is now beyond doubt."

Right you are Clive. The primary ulterior motive is control of the means of production; all means of production. Everywhere.
Just as the 'health care' scam is truly about nothing more than total control of the populace, invasion of their privacy, and forced taxation into untold misery via mandated 'health insurance'.
The two in concert meld into a totalitarian system, which has been the Obama/Soros goal all along.
Al Gore is merely a useful idiot who has been allowed to make obscene amounts of money peddling his scare tactics.
We are not in the grip of stupid people who do not know what they are doing. They know exactly what they are doing.
Our current Sorcerer's Apprentice in Chief is dancing well to the Sorcerer's tune.
George Soros must be ecstatic.

I suggest that we make our feelings known on the pro-AGW blogs. Its no good preaching to the converted. For instance, I have left a couple of comments on the UK's Independent newspaper blogs stating that rather than be defensive about so-called 'Climategate' we should be embracing this opportunity for openness and to let the science and data stand on its own merits.
Of course neither of my postings were published, but I will not quit.
So lets all post REASONABLE, unemotional, unheated comments (with no ad hominem or questioning of socialist motives) simply calling for scientific openness and honesty in this debate, and lets post these comments on the pro-AGW blogs. Let us show clearly that it is we on the sceptical side that are reasonable, and those on the other side who are not.
You with me? Keep a cool head, and go post a comment now!

Sorry, Lez, after reading and hearing all the AGW lies since the late 1980s, I am in no mood to be "reasonable" about this giant fraud and the billions already wasted on it.

LezDawson says, "...no ad hominem or questioning of socialist motives"

And I have to agree. There is absolutely NO QUESTION that their agenda is being driven by SOCIALIST MOTIVES, of which I want no part.

However, I have to less than politely disagree with his suggestion that I should just be calm about it. Being calm and reasonable is what got us into this mess in the first place. It's well past time for a little righteous anger at those who would make us their slaves.

I have always felt it best to puncture your opponents argument before inflating one's own.