Americans are Drowning in Our Government's Lies 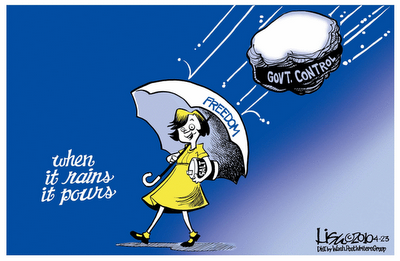 It’s not just the lies about climate change.

It’s not just the lies about renewable, wind and solar, energy.

It’s not just the lies about so-called endangered species.

It’s not just that the Obama administration refuses to name Islam as the source of the terrorist attacks on America.

It’s not just the government takeover of auto manufacturers or insurance companies.

It’s not just a Federal Reserve that is not subject to audit, nor its purchase from banks (at 100 cents on the dollar) of billions in “toxic assets”, nor the fact that it is free to flood the economy with currency with shockingly little congressional oversight.

It’s not just that a new oil refinery has not been built since the 1970s, nor that new nuclear plants are not being built here while elsewhere around the world they are being constructed with growing rapidity.

It’s not just that federally sponsored entities like Freddie Mac and Fannie Mae own the vast bulk of all the mortgages in America or that they are primarily responsible for the financial crisis the nation suffered.

It’s not just that banks and mortgage firms were required to make loans to people who clearly could not repay them.

It’s not just that the latest nominee to the Supreme Court has been selected exclusively on the basis of her socialist viewpoint or lacks a record of judicial experience.

It’s not just that the nation’s educational system is entirely controlled by teacher’s unions, the result of which produces students who cannot compete academically with those in other nations or that the federal government insists on a failed one-size-fits-all testing formula.

It’s not just that the federal government, responsible for the protection of our borders, has totally failed to do so while our southern border has become a virtual war zone.

It’s not just the U.S. cannot afford to help “bail out” Greece with billions of taxpayer’s money while our national debt soars to historical new heights.

It is not just that Democrats, the majority party, are using their political power to impose laws opposed by the vast majority of Americans, endangering future generations with massive debt while nationalizing one-sixth of the nation’s economy.

And it is not just that the credentials and standing of the President of the United States are subject to legitimate inquiry and challenge that is being stalled in the nation’s courts.

It is a combination of these and other factors that are based on a contagion of lies told to Americans by their own government.

Even when they're not lying, you surely can't trust their judgement or common sense.

Reading this and other current commentaries around the Interweb, I'm remind of Sec/Ag Butz' advice to farmers: "Get big or get out of farming." So, many got big and the next thing you know, Willie Nelson is doing FarmAid concerts.

Then Mr. Republican, Bob Dole, helped us immensely with the Alternative Minimum Tax.

And with some of these strange creatures who are running the show, I really don't think they're all lying: Many of them actually believe that drech!