The Futility of Seeking Peace with the Palestinians 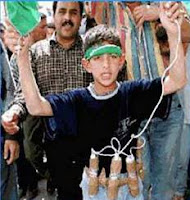 Here’s a notion worth considering; you cannot make peace with people that want to kill you.

It is impossible to make peace with people who will not sit down and negotiate with you on any other terms than their own.

It is beyond impossible if you are seeking peace with people who regard your existence as a “nakba”, a disaster, a catastrophe.

Several U.S. administrations have foundered in their efforts “to end the Palestinian-Israeli conflict.” That conflict would end the minute the Palestinian entities, whether they are the Palestinian Liberation Authority and/or Hamas would accept Israel as it is in 2010 and not demand that history be erased and that it return to its 1967 borders.

How are the Israelis expected to make peace with two Palestinian factions that don’t recognize the other as legitimate? Hamas actually drove the PLO out of Gaza at gunpoint.

Making peace is hard enough when the adversary is supported by a United Nations that has passed more resolutions condemning Israel than any other nation on Earth. Now that the current U.S. administration is led by a president whose hostility to Israel is embarrassingly evident, it makes it even more impossible.

This is, after all, a president who got in a snit over the building of new housing in Jerusalem, the capitol of Israel, by Israelis.

Would you trust the U.S. as a partner in peace when it is led by a president whose first act in office was to give an interview with the Middle East television channel, al Jazeera? Who then followed it up with a tour of the Middle East and a speech in Cairo that blamed America for its “mistakes” and its alleged failure to satisfy the demands of a Middle East.

The Middle East is the same place that spawned al Qaeda and an attack on the U.S. that killed 3,000. The Palestinians celebrated 9/11 by dancing in the streets.

There is something obscene for the current administration, filled with appointees and “czars” who are openly opposed to Israel’s right to exist, to conduct negotiations of any kind, but they began on May 6 after a break of more than a year.

These negotiations can only guarantee one result. Sometime this summer Israel will be attacked, probably from the Lebanese strongholds of Hezbollah.

The Syrians, closely allied with Iran, have been shipping in all manner of new, more dangerous rockets. Neither Hezbollah, nor Hamas, both controlled by Iran, wants peace with Israel and both will do whatever is necessary to ensure it does not occur.

You can depend on the press to dredge up all the stuff about the poor Palestinian refugees who were driven out of Israel after it was initially attacked by several Arab neighboring states. No mention will be made of the hundreds of thousands of Jews who formerly lived in Arab nations that were forced to flee to Israel and no mention will be made of the Arab Christians who also found sanctuary in Israel.

The president’s envoy, George Mitchell, will shuttle back and forth between Jerusalem and Ramallah, a half hour’s drive away in the West Bank, in an effort to convince the Palestinians to sit down at the same table with the Israelis.

The Palestinians will insist on control of parts of Jerusalem as their capitol too, they will raise the refugee issue even though two generations of Palestinians have grown up in United Nations “camps” because few Arab nations in the Middle East will grant them citizenship. They will demand that the Israelis return to their 1967 borders and end their West Bank settlements. They are not “settlements.” They are Israeli towns on land won in war from Jordan.

The Israelis have been sitting down at the table with the Palestinians for twenty years or longer. All they have gotten are more attacks on their people. All the Palestinians have gotten is the complete and utter failure of their leaders to build a separate nation that will recognize Israel.

To have peace you must make peace.