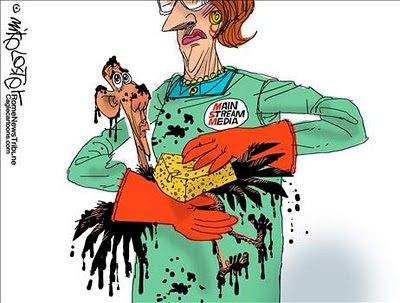 It does look like BP, Transocean and Halliburton each have very good reasons why they are not responsible for the leak, so I guess that does leave the government "responsible".

I fear that "Big Oil" have done themselves (and us as energy consumers) a major disservice with this leak. Offshore drilling will grind to a halt and the industry will be faced with tons of new regulation. What a tragedy.

The thing to keep in mind is that, not just the US, but the whole world needs oil. One oil rig accident is not going to change that.

The real problem is the failure and refusal of several US administrations to permit oil exploration and extraction for so long we are needless dependent on foreign oil when we have plenty of our own.

Of course one accident does not change our need for oil, but it makes the societal and regulatory issues much more complicated.

We're already starting to see a flow of comments indicating that some people (regulators) asked BP/Transocean to undertake more preventative measures, but were rebuffed. True or not, I'm afraid this will all lead to the situation where the oil industry will not be trusted to determine appropriate methods for drilling and spill prevention. They have lost a lot of credibility over this.

Alan -
If a fraction of what is coming out about BP/Transocean/Halliburton is true, there's good reason to not allow that crowd to work in US waters again. Apparently no regard for safety and caution leading up to the accident as many signals were indicating that there were serious problems.

Paul: You are apparently unaware of what an "accident" means. If we follow your way of thinking, all trans-Atlantic passage on ships would have been banned following the 1912 sinking of the Titanic.

Mea culpa, Alan. You are correct - according to Webster accident means "an unforeseen and unplanned event or circumstance."

The event that occurred was unplanned, but not unforeseen. It was the type of event that happens often in drilling, and for which the industry has many policies and procedures to prevent. Since this type of event is clearly foreseen by the industry, this event was not an accident.

I hope my misuse of "accident" didn't obscure my point. In the eyes of much of the public and politicians, BP (and Big Oil in general) have lost a great deal of credibility. Even if this is not deserved, this loss of credibility is likely to interfere with our future deep water drilling.

We do need that oil and much more. It's a shame that BP, et al. end up being caricatured as less than totally competent when they are the best in the world at what they do.

Paul: There are close to 390 oil rigs in the Gulf of Mexico...even during hurricanes they were just fine.

Oil rig disasters are surprisingly rare. Just check the news and you will disocver that factories and comparable places blow up with regularity.

Offshore drilling, particularly along the 85% of the US coastline where they're banned, is greatly needed...as opposed from importing oil.