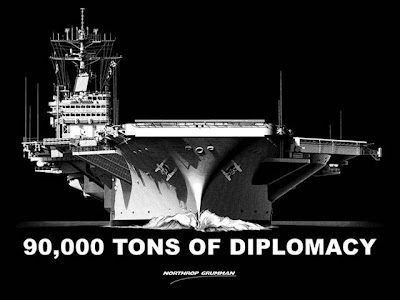 Every couple of decades, the world needs to sort out its various grievances. The most common mode of doing this is war and it is a truism of war that those waging it, successfully or not, sooner or later want it over. Empires, great and small, are always exhausted and generally ended by wars, even if they are on the winning side.

The last century was distinguished by two World Wars. The first was largely limited to Europe. Mechanization increased the numbers killed and it ended so poorly for Germany that it felt compelled to go to war again a mere twenty years later. That ended poorly for them as well. Making matters worse, the Japanese had dreams of empire at the same time, thus making both conflicts truly global. Their dreams ended under a mushroom cloud on August 6, 1945.

This did not dissuade the North Koreans from invading South Korea a few years later. The United States led a so-called United Nations coalition of forces, but as usual we did the most fighting. We went that route again in Vietnam until Americans began to fill the streets of Washington, D.C. with protests and, eventually, we left.

Things quieted down for Americans after that. We had a sortie or two in Panama and Grenada, and suffered losses as part of a peacekeeping force in Beirut. The Russians decided to invade Afghanistan and that turned out as badly for them as Vietnam for us.

After 9/11 we were the next ones into Afghanistan and have still been unable to leave. After Iraqi dictator, Saddam Hussein, had finished unsuccessfully waging war with Iran and then invaded Kuwait, it was a fairly easy decision to put troops in Iraq to get rid of him. We are still there.

At the end of World War One, the League of Nations was created to avoid future wars and then ignored. After World War Two, the United Nations, a pet project of Franklin D. Roosevelt, was created. Its first, interim Secretary General was a Soviet spy who worked at the highest levels of the U.S. State Department. Not a good start.

The United Nations is now the solely owned property of a coalition of Middle Eastern, African, and various socialist nations in South America and elsewhere. It is not merely useless, it is evil incarnate. Everyone in its headquarters on the East River should be told to find someplace else in which to intrigue against the U.S. After that, the headquarters should be fumigated and turned into condos.

After the world wars there was a passion to create international organizations whose purpose was to resolve conflicts, create trade agreements, and, in the case of the International Monetary Fund, bail out nations too stupid or criminal to conduct their own affairs without adult supervision.

Along with the World Trade Organization and similar organizations, ostensibly, the object was to maintain global stability, but the reality has been the establishment of global governance; one in which the central banks play an important role. To achieve this, nations must be induced to relinquish their national sovereignty.

In Europe, to avoid any more wars between Germany and France (which dragged everyone else into the mess) the European Union was formed. It sports a common currency and open borders. It came complete with a huge bureaucracy to promulgate thousands of regulations and a whole new class of useless political jobs.

None of this international fervor seems to turn out well and the EU is watching its plans for a united Europe go up in smoke thanks to Greece and other members tottering on bankruptcy. So much for the theory that global or multinational organizations are any better at running their own affairs than individual states, particularly if they are socialist economies.

If you think about it, getting all of the now fifty American States to work together as we have since the Constitution was ratified in 1788 is nothing short of a miracle, although we did take time out in 1861-1865 to sort out the nasty business of slavery. As usual, war was the way the matter was settled.

We have now arrived at 2010 and, as we look around, the U.S. has its military in Afghanistan and Iraq, along with an estimated 700 to 800 bases and missions, large and small, around the world. It has personnel in some 156 nations and always by invitation unless, as is the case with Afghanistan and Iraq, we’re there due to provocation and national security.

The entire world’s security is threatened by the rise of militant Islam and that genie has to somehow get put back in the bottle. Killing the Islamists from among 1.3 billion Muslims seems to be the only way to do it.

The United Nations is useless. The European Union is facing a financial meltdown. Its socialist member nations such as Greece, Spain, Portugal, Ireland, Italy, and even England have managed to spend their citizen’s money until there is none left to spend. Just as the Soviet Union imploded in 1991, it too may fall apart. As far back as 1848, Frederic Bastiat defined socialism as “legalized plunder.”

The contagion of financial failure is likely to lead to worse problems and, unfortunately, the United States will not be exempt because it too is deeply in debt. The national debt under the present administration has been tripled. Collapse is a very real possibility. Nations in the Middle East and anywhere they are run by despots will see an opportunity to resort to military means to expand their power.

In the same way the world fell to making war in the 1930s, it is on the brink of a similar scenario unless the prospect so frightens the leaders of Western and Asian nations that they will be left with little else than to threaten all others to settle for solutions that do not involve missiles, armies, navies and air forces.

The much vaunted “globalization” has masked the reality that individual nations must act responsibly or pay the price. History does not forecast a good outcome.

Dear Mr.Caruba,
Did you know that AOL is refusing to deliver mail containing copies of your column.
This is what I received when I tried to send a copy of your column to 3 friends at AOL. Copies sent to other domains were not affected.
http://postmaster.info.aol.com/errors/421hvub2.html
The column was 'Americans are Drowning in Our Government's Lies'
This has happened before with other of your columns.

Charles, I am aware that there have been problems with my AOL email. I often do not receive email sent to my AOL address and it is disturbing to learn that my writings are not being transmitted.

If this situation continues, I will take steps to resolve it with AOL. Thank you for bringing this to my attention.

Dear Alan
You said... unless the prospect so frightens ... Problem is, we are confronted by people who are possessed by a demonic madness. They will not be frightened. A huge contributory factor is much of the Western world prides itself in being secular in nature. As such, they sneer at the childness of any belief in Satan as being a real demonic individual. With him having secured himself so successfully behind that cloud of ignorance, the Western world has denied itself even fundamental entry into the understanding of how this battle should be fought.

Alan, I'm amazed you even use AOL. I've been trying to find a way to extricate myself from them for years but due to several business-related reasons that I won't go into, it would be difficult for me.

My blood boils daily when I read some of the garbage that passes for "news" on their site. Also, it may be my imagination, but it seems like the comments are always turned off on all the stories that would elicit strong "right-leaning" commentary.

I've also noticed that they tend to drag up old stories and pass them off as "news", and it's always the ones that either reflect a hard left viewpoint, or a strong anti-right position. It's not unusual to see a story that's three or four weeks old on their front page, and every time it happens, I sit here fuming.

The real corker was when they gave my e-mail addresses to the Obama administration so they could send me their "warm-fuzzy" e-mails about Barack the good father, and Michelle the humanitarian ... that did it for me. Did you get those?

Luckily, I don't PAY them anything anymore ...

I confess I stay on AOL simply because I have been on for so long and my email address has been in circulations for so long that I am reluctant to change. As for the "news" they post, I never read it.