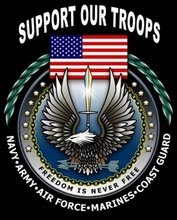 The trouble with the military is all that sand. My father, playing on the beach at Normandy. Me, messing around the beach at Inchon. My kid, in the sandy desert of Araby's King Khalid airbase.

The military is an honorable profession and is a useful tool. My problem is with politicans' misuse of tools, given their ability to wreck an anvil with a rubber hammer...

Thank You , ALL of our Armed Forces, G-d Bless you ,and keep you safe. Thank You for your service!

My two years in the Army ensured that I would never go "camping" or have much else to do with the great outdoors.

I was fortunate to pass my time without anyone shooting at me.

Ehh, I probably have more time around a campfire than a lot of folks have being upright and breathing.

My father never spoke much about his time in Europe, but from his choice of words and phrasings, he seemed to have regarded it as a rather interesting variation on deer hunting.

At least my son has appeared to be a more normal member of society. I'm not sure that's a good survival tool, however.