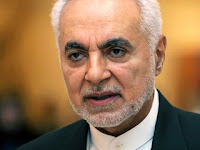 Why do we love the hucksters so much? Put a smooth talker in front of us and we are entranced. The latest in a long line of these charlatans is Imam Feisal Abdul Rauf, the face of the Ground Zero mosque project.

Soft-spoken, seemingly erudite, Imam Rauf moves in the power circles that even had the U.S. Department of State picking up the tab for his tour of the Middle East---presumably to promote greater understanding of U.S. policy as it affects that part of the world. No doubt this was a reflection of President Barack Hussein Obama’s directive to the head of NASA to make Middle East outreach a top priority. Forget about that space exploration stuff!

At a conference in Australia in 2005, the same Imam Rauf, said “We tend to forget, in the West, that the United States has more Muslim blood on its hands than al Qaeda has on its hands of innocent non-Muslims.” He then went on to cite “documentation” by the United Nations that “a half million Iraqi children” died as the result of U.S. led sanctions against Iraq. Those sanctions, the "Oil For Food" program, also became a huge U.N. scandal that enriched many of its top executives, including the then Secretary General, Kofi Annan’s son.

People who trust the United Nations will quite naturally trust the likes of Imam Rauf.

Thanks to a group called the Investigative Project, we now know that one of Imam Rauf’s close associates on the Ground Zero mosque is Faiz Khan, a physician who serves on the advisory board of Muslims for 9/11 Truth.

To hear Dr. Khan discuss 9/11 is to be told that the destruction of the Twin Towers had nothing to do with al Qaeda and was all an inside job by the U.S. government that set up the Islamic militants who perpetrated it as scapegoats.

Aside from the absurdity of the so-called 9/11 “Truthers”, the notion that people would politely listen to Imam Rauf discuss tolerance and a huge multi-story mosque within sight of Ground Zero goes way beyond a lack of judgment or naiveté. That kind of malevolence cannot be excused as insensitivity.

The Imam has been gaming U.S. law for a very long time. A 1998 tax filing called a 1023 form, an application for tax exempt status from the American Sufi Muslim Association (ASMA) claimed that the group had established a place of worship in New York that was, in truth, an apartment on West 85th Street. The form claimed that up to 500 people congregants would gather there when there wasn’t a room large enough in the entire 17-floor building to accommodate that many. There were no public spaces. Period.

Real estate properties he owns in New Jersey are home to some very unhappy residents and there are problems regarding his financial and management responsibilities for them.

Muslims in the Middle East and elsewhere look at the United States and all they see is an enemy of Islam. They conveniently forget all the attacks on U.S. embassies, the U.S. Marine peacekeeping force in Lebanon, the USS Cole, and, of course, the attacks on 9/11. As Imam Rauf put it, the U.S. was an “accessory” to those crimes.

The big secret no Muslim will reveal is that Islam is at war with the United States, the West, and anywhere else in the world where it does not control the government of various nations.

The largest and most powerful collective in the United Nations is the Middle Eastern bloc of nations. And the greatest collection of abusers of human rights can be found among Muslim nations.

It was the sheer audacity of suggesting that a mosque be built near Ground Zero that caught the public’s attention that has waxed and waned since the news first broke.

It has become a vortex sucking politicians into a dark place where they are forced to say that Imam Rauf and his largely unknown associates have a First Amendment right to build, BUT it’s a bad idea. A few hardier politicians have had the good grace and good sense to oppose it.

Filmmaker, Michael Moore, that bell weather of liberal idiocy, actually opined that a mosque should be built as part of the 9/11 memorial site. This is six degrees of separation to the far Left of Mayor Michael Bloomberg who thought the recent Times Square terror attack was probably perpetrated by someone who didn’t like Obamacare.

Americans in their quest for hope and change have already embraced one Muslim who claims to be a Christian, Barack Hussein Obama. Under the concept of “taqiyya” this deception is permitted by Islam. It’s time to get over the illusion that Muslims mean us anything other than dhimmitude, a second class status in our own nation. Or death.

The bottom line is that no one with any good sense should believe a word that Feisal Abdul Rauf has to say on the subject of “tolerance” or the mosque. He is a Muslim stalking horse for interests that seek to impose Sharia law on America and the rest of the world. That is always the end game for alleged Muslim “moderates.”

I used to say.."That makes me mad enough to eat sauerkraut!!..(Which I like).
Please don't be offended Mr Alan, BUT...
I would like to buy a hog, take it to that building, slaughter it, then Bar-B-Que it and hand out sandwiches...
If our legislators are not going to protect US from foreign influences...then what are we to do???
If they want this islamic dribble then they can go live in a mud hut and practice it.

James, that mosque is NEVER going to be built.

Though the Imam has a nice goat he'd like to sell you.

Bellwether by the way.

If the Mosque at Ground Zero is built, we all know that anything can burn, even steel and stone, if the temperature is high enough.