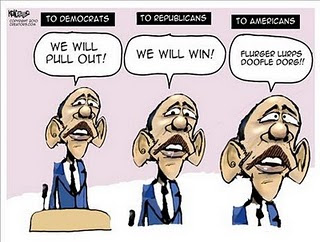 Are we there yet? Living in Obama’s America is like some horrid, seemingly endless road trip with no bathroom breaks.

I have heard a variety of scenarios regarding the months and days that Barack Hussein Obama remains in office. There are countdown clocks available on the Internet for those who have to know how much more horror we must endure.

I have long since stopped watching or listening to the man for the same reason I don’t pay all that much attention to Mamoud Ahmadinejad. Both lie all the time. Both are ideologues who are immune to reality. Both are destined to come to a bad end. I favor seeing Obama live to a ripe old age like Jimmy Carter, getting up every day knowing how despised he has become.

I leave the job of trying to deduce his day to day machinations to those whose job it is to figure out what he’s up to. To them, I recommend some magical chicken bones and shiny pebbles that can be tossed on a piece of black velvet in order to extract a hint of the future from the patterns they make.

I do not maintain a daily Obama Watch. I ignore him. The last time I did this was somewhere beyond the midpoint of Bill Clinton’s first term. As all the stories of his uniformly loathsome behavior toward women spilled into the gutter of American journalism I was long gone into a protective cone of silence not unlike the one in “Get Smart.” After the Republicans took control of Congress in 1994, I breathed a sigh of relief knowing that the Republic was safe.

Oddly, George W. Bush never bored me. Any President who will say “Bring it on” is my kind of guy. So, okay, it took longer than expected to get Iraq on track, but things improved measurably once Donald H. Rumsfeld was sent packing. There is something to be said for leaving the conduct of war to the generals.

I’m not bragging because I had Obama’s number before he took the oath of office. Dr. Jerome R. Corsi’s book, “Obamanation”, was and is a masterful piece of research that spelled out what we could expect from him. Since then, books about Obama have become a cottage industry with the latest by Bob Woodward confirming that he always wanted to get the hell out of Afghanistan even when he was saying he didn’t.

All this has spawned another industry of sorts; predictions about how the remaining time until January 20, 2013 will play out for him. These scenarios mostly reflect the wishful thinking of those putting them forth, but they are interesting if for that alone.

There is the assassination theory. This was advanced early on in the belief that some likely KKK member would kill him for sleeping on the white sheets in the White House.

There hasn’t been a presidential assassination since John F. Kennedy in 1963 so these events are rare. There was Lincoln, Garfield and McKinley; four out of forty-four.

There is the impeachment theory. Here again, history does not favor this option. Impeachment has been rarely tried and never successful. The effort to impeach Clinton only served to make him some kind of counterculture hero. Having learned that lesson, a Congress controlled by the GOP should simply do everything it can to thwart any further Obama legislative initiatives, appointments, et cetera.

There is the birth certificate theory in which the courts by some miracle actually allow challenges to Obama’s eligibility to proceed to a point what he is required to produce his long form birth certificate currently in a vault in Honolulu. Was he born there? At this point, it hardly seems to matter. For all we know, he’s still a bona fide citizen of Indonesia. Or Kenya.

There is the resignation theory. This is the thinnest of hopes because being President of the United States is such a cool job that Obama would never give it up. Just consider all the perks. Just consider all the ways he can screw all of us colonialist, imperialist, capitalist Americans? He has surrounded himself with people who can barely conceal their contempt for the nation.

There is the election theory. This postulates that he is a one-term president and, for my money, this is the only one that holds up. His popularity, even among those who voted for him, continues to tank. He has embarrassed the nation with all that bowing to kings, emperors, and union leaders. Not unless the Republican Party nominates a convicted child molester will their candidate lose against Obama.

Not all the Tele-Prompters and speeches between now and Election Day 2012 will help Obama get re-elected. The only exception, possibly, would be World War Three and even then Americans would vote for anyone else because, if there is one thing we know about Obama, it is that he is a coward.

Like Lyndon B. Johnson, Jimmy Carter, and Bill Clinton, Barack Hussein Obama will simply have to be endured while the Republican Party, re-energized by the Tea Party movement, plays defense until a new quarterback can be brought into the game.

Alan, I must admit that I'm no scholar when it comes to politics, so I'll ask you ...

Can, or has, a party ever dropped their support for and abandoned a sitting President, and nominated a new candidate after four years? I seem to recall that there have been some who didn't survive to run for their second term, and some who chose not to, but I'm curious....

Could the Democrats abandon Obama and bring another candidate into the fray in 2012?

Three things we know for sure about Obama:

I would have to do some research. I know LBJ announced he would not run again, but my general impression is that parties have not abandoned a sitting president if he wanted to run again.

To do so would be to admit the party had made a bad choice and, of course, they do that regularly, i.e. running McGovern, Dukakis, etc, neither of whom were president, but in retrospect were both seen as the wrong candidate for the job. The GOP stuck with Hoover and Ford despite public preferences for a change.

Running McCain is yet another example.

If the Dems run Obama in 2012, the GOP could run Mickey Mouse and win.

@ Ronbo:
Sorry, but we still do not have proof Obama was born in Kenya.

As for his being a liar...Yup!