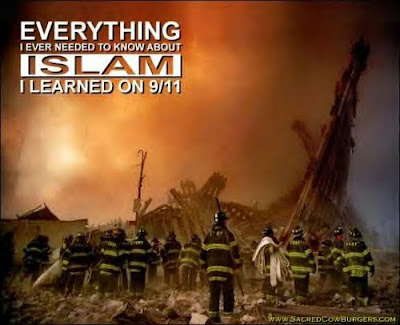 Indeed! This cowardly and dastardly act of terrorism will in my never humble opinion result in the destruction of Islam at the end of a generation long struggle.

...There just ain't enough room on this planet for America and Islam.

The Koran hardly fits my definition of a "holy" book. It is essentially a battle plan to assert global dominance in the name of Mohammed.

And who was Allah? A Meccan mood god.

There is only one lesson to be learned from 9/11. That is that Islamic nations are at war with every other nation/possession/territory on planet Earth (and even at war with each other), and it can never be made otherwise. Peace can not be had with any Islamic nation, not a single one of them.

Best to allow them to fight it out amongst themselves, and make any one of them into glowing piles of rubble when ever a single one of them gets out of hand and significantly bothers any non-Islamic nation.

We, the USA, need no treaties, help or permission to make that happen quite handily, and none could prevent us from doing so.

...I will never forget what they've done to us. Never.