No to the Cape Cod Wind Farm. Yes to Whaling Ships! 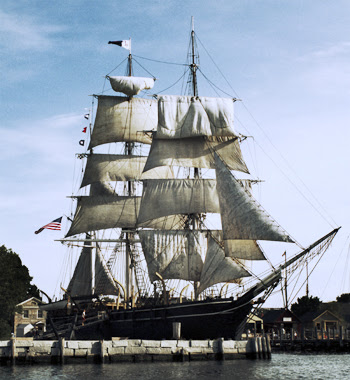 The opposition from residents of Cape Cod to the proposed wind farm off their coast line to generate electricity has been vociferous, but they are up against a juggernaut of well-funded special interests that are indifferent to the destruction of the natural beauty of the area, its sailing lanes, the dangers to migratory bird species, and the endless noise that the dozens of blades will impose on the area.

If the producers of these turbines are so keen on wind power, I propose that they change their business plan and begin building wind-driven sailing ships instead. It would be a boon to the economy employing hundreds of craftsman and all the others who would be needed to cut down the trees from Massachusetts’ forests and transport them to the timber mills that would be needed to create the various wooden elements of these great ships.

New Bedford, Massachusetts and other coastal towns were famous throughout New England at the height of the days of the whaling industry. Whale oil kept the lamps of citizens glowing until the invention of electricity introduced the miracle of incandescent light bulbs. Since these bulbs’ manufacture and sale have been banned by the federal government, it seems obvious to me that a renewed whaling industry is just around the corner.

Hundreds of large trees of several types were needed to build an average-sized whale ship. White cedar was in particular demand. Clear-cutting portions of the State’s forests would make room for more housing in newly created suburban areas, thus contributing to its economic growth. Trees from other parts of the nation could be put on barges and brought to the newly resuscitated ship building sites.

Even if whale oil didn’t make a comeback, locals and tourists could be treated to a variety of whale meat and blubber recipes, thus reducing the need for the raising of cattle which contribute to global warming with their ceaseless emissions of methane and other trace gases in the atmosphere.

Thus, New Bedford could return to its historic roots while at the same time the ocean area off Cape Cod’s coasts could be kept in the pristine way that Nature has provided for millions of years before the invention of wind turbines.

Imagine the pride that locals could take in the new whale ships. Four types were commonly built in New Bedford. The largest had three masts with huge sails to capture the wind and often carried four or five whaleboats used to pursue the whales. They had crews that numbered thirty or more. Here again, in these times of widespread unemployment, one can see the advantage this offers.

Artisans would be employed to sculpt the fanciful figureheads that adorned earlier whale ships, as well as stern carvings for the two-and-three mast ships that were the pride of New England.

As John Droz. Jr., an authority on wind power points out, “Wind energy was abandoned well over a hundred years ago, as it was totally inconsistent with our burgeoning more modern needs of power, even in the late 1800s.”
IF there was any need for wind power, why is it necessary for the government to mandate, i.e. require its use?

If there is no global warming, why are we told wind power doesn’t generate the carbon dioxide that is supposed to be causing it?

Why are Americans being literally forced to accept a form of energy abandoned more than a century ago?

I hope this little exercise also demonstrates how idiotic it would be to put row upon row of wind turbines in place to provide less electrical energy than a single coal-fired or nuclear plant would produce far more economically and efficiently.

Too many environmental proposals like wind power have no more basis in reality than my proposal to reinstitute wooden ships for a long gone whaling industry.

I hope the Cape Cod wind farm proposal is ultimately defeated because it makes no sense, would prove far too costly insofar as it would not provide any savings in energy costs to consumers who would, in fact, see their electricity bills increase.

Lastly, it’s worth noting that the turbines will be built, not in America, but in China, a nation that is building an average of one new coal-fired plant every week to provide the energy it requires.

China probably needs the energy from its coal plants to build the stupid windmills for the US.
Sigh!
Ed

@Eddy. And all the other things Americans no longer manufacture here!

Not to mmention what Delingpole has to say today over in the Telegraph: http://blogs.telegraph.co.uk/news/jamesdelingpole/100056158/wind-farms-yet-another-brewing-disaster/

Not to mention what James Delingpole has to say today in The Telegraph: http://blogs.telegraph.co.uk/news/jamesdelingpole/100056158/wind-farms-yet-another-brewing-disaster/