The Grand Panjandrum of Pundits 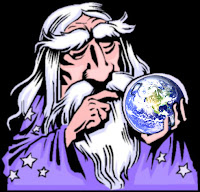 It’s a little known event, perhaps because its participants want it that way, but as the new year is poised to begin, the Grand Panjandrum of Pundits gathered at an undisclosed location for their annual review of all the predictions they made regarding things that did not occur, all the events that did occur—taking them by complete surprise, and to exchange notes on their thoughts regarding 2012.

The philosopher Aristotle had it right when he said “Stuff happens.”

This particularly applied to the third year of Barack Hussein Obama’s extended vacation as President of the United States of America. He ended the year comparing himself to previous presidents whose shoes he is not fit to shine and whose bathwater he is ill equipped to draw.

On January 2, 2010, I wrote that I thought Obama’s life, at least in the chronology and facts that were presented to the public, was a pure fiction, make believe.  By then Americans had experienced a year’s worth of ineptitude that left anyone paying any attention astonished. It was just one blunder after another.

Even more astonishing is that no court, no one in Congress, and no one in the Republican Party has dared to say that the man was and remains ineligible to be President. Plenty of other people have said it. My friend, Dr. Jerome Corsi, wrote a whole book about it; two in fact.

The glaring truth that no one wants to address is the fact that his father was a citizen of Kenya and, as such, the terms of the U.S. Constitution which require that only “natural born” citizens—those whose both parents are U.S. citizens—can hold the office of President.

When you add in the serious doubts over the authenticity of his birth certificate—declared a fake by document experts and the dubious authenticity of his Social Security number, issued in Connecticut where he never worked a day in his life, and you have enough evidence to send him packing in less than 24-hours.

Even so, the Democratic Party will put him on the ballot again to run for office in 2012. The legality of this is no more likely to be challenged than it was in 2008, though some are trying. The Grand Panjandrum of Pundits was left to scratch their heads and mumble about the strangeness of this.

There was one thing they agreed upon. Barack Hussein Obama is the worst President the nation has ever had to endure.

No other president even comes close. He is the first to preside over the first U.S. sovereign debt downgrade in American history.

Employment is the lowest since 1983 and long-term unemployment (45.9%) is the highest since the 1930s, the years of the Great Depression.

The rate of home ownership (59.7%) is the lowest since 1965 and the percentage of taxpayers paying income tax is the lowest in the modern era. At the same time, the level of government dependency (47%), those persons receiving one ore more federal benefit payments, is the highest in American history.

Obama and his economic advisors have achieved this in just three years while others in his administration were authorizing millions in loan guarantees to “Green” companies going bankrupt with alarming predictability or producing heavily subsidized products that no one wanted to purchase. Others we’re told were unaware of a Department of Justice program to run guns to drug cartels in Mexico. Plans to shut down Gitmo were quietly shelved. The Bush-Cheney policies were quietly extended.

Within twenty-four hours of the final withdrawal of U.S. troops from Iraq, Baghdad was besieged by bombings while the prime minister was busy trying to arrest and indict the vice president. You cannot make up stuff like this.

We are now mere months away from the Supreme Court hearing a case regarding the constitutionality of Obamacare. It is normal for judges who have had any previous involvement in a case or those close to it to recuse themselves from participating, but the Obama administration is so marked by a lack of ethics that his former Solicitor General Elena Kagan, now an Associate Justice, has still not announced her decision.

If the Supreme Court rules in favor of Obamacare, the federal government can require you to spend your money on things you do not want and may not need.

This is why the Grand Panjandrum of Pundits ended in a state of mass confusion and despair. Just like it did in 2010.

"When he left office, popular opinion had turned against him, and the Democratic Party had split in two. Buchanan had once aspired to a presidency that would rank in history with that of George Washington. However, his inability to impose peace on sharply divided partisans on the brink of the Civil War has led to his consistent ranking by historians as one of the worst Presidents."

Of course, the Buckster only had one term, whereas Obama appears to be headed for eight years in office, since his Republican opponent appears to be SOCIALISM LIGHT Romney.

Ronbo, you need to clean off your crystal ball. There are no indicators that Obama will be reelected. No polls indicate this. The unpopularity of his policies is another ndicator. It is, as always, the economy that will finish him off. It will not sigificantly improve. Buchanan gave us Lincoln. Carter gave us Reagan.

The only amazing communicator in this flock is Newtie. If that doens't scare you ....well... nuf ced.

The only thing I have seen lately that changes my mind that the nation is facing an epicemic of stupid is your post "Video - A Random Act of Culture". That made me think there is more depth out there than the polls or the news show.

Journalists keep getting it wrong! It doesn't matter where he was born. He didn't have two American parents. My position is that if he was born on the capital steps he would not be eligible because he only had one American parent. Consider this conversation at McCain’s eligibility inquiry by the U.S. Senate: "My assumption and my understanding is that if you are born of American parents, you are naturally a natural-born American citizen," Chertoff replied. "That is mine, too," said Leahy. What's interesting here is that Sen. Leahy, the Chairman of the Senate Judiciary, confirms that a "natural born" citizen is the child of American citizen parents. Parents -- that's two. That's BOTH parents.

Do you really think AKA Obama would have won the election if all the things he is hiding were made known?

Do you really think AKA Obama will be able to finish his first term if all the things he is hiding are made known?

Do you think Obama spent a fortune keeping his history secret because there wasn’t something to hide?

If Obama said, “I have nothing to hide, but I am hiding it”; would you believe him?

If you are not suspicious of a man who hides his history I have a bridge in the desert I want to sell you.

If you are unwilling to call for an investigation of a man who attempts to sell you a bridge in the desert I have some beach front property in Florida at the intersection of I-75 and Florida # 29 that I want you to buy.

If you place a down payment on a contract for the bridge in the desert and the beach front property in the swamp I would conclude that you voted for Obama.

Obama will be exposed –Don’t get caught on the wrong side of this issue
SEE: http://obamaballotchallenge.com/

When Harry Truman left the White House he was asked how it felt to be an ordinary citizen after being President. He responded, “I am glad for the promotion”.

I hope you're right - no Republican candidate - even Ron Paul - could be worse than Obama.

Therefore, if Romney gets the Republican nomination, I'll vote for him.

In regards to the next civil war that appears to be a growing dark cloud on the horizon - this historic election - like 1860 - will determine which party controls the federal government in the coming struggle...and not necessarily the victor over treason.