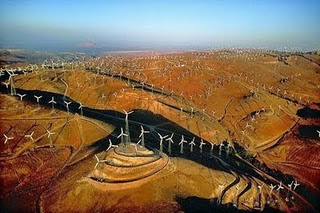 Imagine if you will America’s mountain ranges topped by row upon row of wind turbines and America’s deserts and plains covered by solar panels. How ugly is that?

A recent Wall Street Journal article, “Wildlife Slows Wind Power”, took note of the slaughter of birds and bats by these Cuisinarts of the countryside. The problem has reached such proportions that “New federal rules on how wind-power operators must manage threats to wildlife could create another challenge for the fast-growing industry as it seeks more footholds in the U.S. energy landscape.”

The wind-power industry is heavily subsidized by loan guarantees and mandates, and like solar power is turning out to be a vast pit of wasted funding that also raises the cost of electricity to communities whose utilities have been required to purchase its output.

It is another environmental pipe dream and one intended to enrich those who go into this dubious business.

Not only uneconomical, it utterly fails to produce sufficient electrical energy to meet the demand of America’s homes, businesses and industry. As the article noted, “The U.S. now has more than 43,000 megawatts of wind capacity, double the level three years ago, generating roughly 3% of the nation’s electricity.”

Try to imagine how many wind turbines it would require to produce anywhere near the nation’s needs. Now consider that the wind does not blow in a constant stream and often does not blow at all.

Consider also that the increase in wind power has occurred within the last three years, precisely the time in which the Obama administration has been in office, throwing taxpayer money at this pathetically inadequate means of generating electricity while doing all it can to shut down coal-fired plants currently responsible for fifty percent of all the electricity generated. Concurrent with this have been attacks on the coal mining industry.

In early 2011 a study sponsored by the John Muir trust of the wind turbines in California found that wind farms are much less efficient than claimed, producing below 20% of capacity more than half the time and below 10% of capacity for more than a third of the time. The report found that the suggested output was particularly low during the times of highest demand.

Unknown to most Americans is the fact that wind power generation requires 100% backup. To maintain electrical grid capacity, the ability to supply customer demand for continuous electricity, every wind farm must have a backup generating facility. Thus, it is coal-fired, gas-powered, nuclear and hydroelectric power generation that ensures a reliable supply of electricity to consumers.

This means that the backup facility must have twice the real rated capacity of the wind farm. The result is more capital is required to ensure this, along with operating and maintenance costs when a traditional power company is forced to include wind power in its inventory. This is a global phenomenon wherever wind power is part of the mix.

The noise generated by wind turbines is such that, especially in rural areas, lawsuits and complaints, also noting lost property value. Such lawsuits have cropped up in Illinois, Texas, Pennsylvania, Wisconsin and Massachusetts, among other states. Increasingly, direct physiological impacts that include rapid heartbeat, nausea and blurred vision have been attributed to the turbine’s ultra-low-frequency sound and vibrations.

An expert on the detrimental aspects of wind power, John Droz, Jr., has created a website for those interested in the facts. Droz notes that “wind energy was abandoned well over a hundred years ago as it was totally inconsistent with our burgeoning, more modern needs of power, even in the late 1800s.” It is an outmoded source of power comparable to plowing farmland using oxen.

Due to intensive lobbying based on the discredited notion that carbon dioxide emissions from traditional power generation plants (with the exception of nuclear power and natural gas) cause “global warming”, this bogus justification is the basis for the wind power industry. Another idiotic rationale is “energy diversity.”

The demand from wind (and solar) power executives for a federal “national renewable electricity standard” would inflict this ridiculous form of power generation upon consumers and it is entirely one of their self-interest. It ignores the nation’s growing population and the need for more electricity generation by means that have a long-established record of efficiency, low cost, and predictability.

Like so much that is based on environmental schemes, it should be abandoned at the earliest possible time.

@scott adie: You might also say it blows; but I guess it depends which side of the windmill one is on. I live in PA and some of the most scenic mountain ridges in the state along I81N are infested with these monstrosities. What an eyesore to a pristine landscape. Where are all the environmental whackos worried about bats and other critters flying into the blades and getting shredded? Can't build pipelines for fear of wiping out the homes of lizards and snakes, but if an environmental hazard to species is a pet project of liberals I guess it's OK.

Also, don't forget that in most of the locations, the wind blows more at night. This is proven by output graphs. We don't need more power at night!

This article reviews US 2010 electricity subsidies.
http://windfarmrealities.org/?p=1240
Wind get more subsidies than nuclear, coal and nat gas combined, yet only produces a small fraction of their energy.

The results is that per MWhr of output, wind subsidies are about 80x nat gas and coal and 17x nuclear. And to get really silly, solar is 15x more subsidy than wind per unit of output or about 1200x tax dollar (future debt) than coal/nat gas.

The bottom line is that you can't create energy for a society to prosper using subsidies=tax dollars=debt. Of course that is the goal of this insanity! Impoverish Our Society!!!