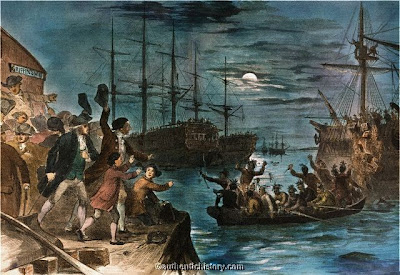 The modern-day Tea Party is a loose amalgamation of people who came together in March 2009 to protest against passage of the Patient Protection and Affordable Care Act otherwise known as Obamacare. There was a large gathering in Washington, D.C. with estimates of several hundred thousand to a million participants.

There had been other events associated with the Tea Party movement and in the 2010 midterm elections the movement was credited with returning power to the Republican Party in the House of Representatives by supporting candidates that associated themselves with the movement. It is, however, not a political party in its own right.

The story of the original Tea Party that occurred on December 16, 1773 is told in a new book, “Ten Tea Parties: Patriotic Protests That History Forgot” (Quirk Books) by Joseph Cummins, a historian who quite coincidently lives in Maplewood, NJ, my home town for more than sixty years until I moved to an apartment complex one town over. Maplewood has a number of homes from the Revolutionary War era so a sense of history pervades the community. Just up the road is Morristown, the site of one of George Washington’s winter headquarters and Jockey Hollow where his soldiers were billeted.

Cummins’ book is a useful and perhaps surprisingl reminder that Boston was not the only site where British tea was dumped overboard rather than pay even the threepense tax on it. There were in fact similar events in Philadelphia, Charleston, New York, and in the other colonies, Chesterown and Annapolis in Maryland; York, Maine; Edenton and Wilmington, North Carolina; and Greenwich, New Jersey.

The Boston event, however, was no small matter so far as the value of the tea destroyed was concerned. More than 92,000 pounds were tossed into the water. “Tall piles of the stuff floated like huge haystacks in the dim moonlight of the bay. And in the days that followed, many British observers wondered if the residents of Boston had gone insane.”

Tea was enormously popular, comparable to our love of a cup of coffee to start the day, and was part of the social life of the colonies. “One third of America’s three million inhabitants drank tea twice a day.” The colonists consumed between 1,200,000 and 2,000,000 pounds a year.

What is perhaps most telling about the Boston Tea Party was that it rapidly spread to other colonies where tea was boycotted or destroyed.

Cummins draws an interesting analogy between our times and then. “See if this story sounds familiar: During a severe financial recession, the government of the world’s most powerful country discovered that its largest corporation—let’s call it Corporation X—is rife with corruption, mired in debt, and facing financial collapse.”

In the case of Great Britain the corporation was the East India Company in 1773, a global commercial empire of its time that had been granted government permission “to mint money, acquire territory, maintain a standing army, enter into foreign wars, and make peace treaties.” The East India Company had shareholders who expected dividends and its fleets of armed merchants carried gold, silver, silk, cotton, spices, and opium across the oceans.

Tea represented a commodity that generated great wealth. Up to thirteen million tons of it was exported to England, largely from India, and by the mid-eighteenth century tea represented almost fifty percent of the company’s income. The import taxes collected by the British government “added up to a rather astonishing six percent of England’s national budget.”

For the first 150 years of the American colonies existence, the settlers were seldom taxed directly by the British crown, unlike the subjects of England and Ireland. As the result of conflicts such as the Seven Years War, the British treasury was low and Parliament decided to levy some taxes on the colonies. The Sugar Act of 1764 was the first. It severely impacted the molasses-rum trade, one of New England’s biggest businesses.

This was followed by the Stamp Act in 1765 that angered the colonists, but “Massachusetts was the first to erupt in angry protests.” Mobs are a useful instrument for a revolution and the men behind the war for independence knew it; in particular, Sam Adams and his co-conspirators that included John Adams, later to become the second President of the new nation. Much agitation for liberty preceded the Boston Tea Party.

The Boston Tea Party was carefully organized and the destruction of the tea from four ships, the Eleanor, Dartmouth, William and Beaver, was undertaken smoothly. What followed, as they say, is history.

The Revolution was a long affair, lasting from 1775 to 1783. Today’s Tea Parties are engaged in what is likely a long struggle to reduce the size of government and secure redress from the imposition of legislation such as Obamacare which will be on the docket of the Supreme Court as 26 States have joined in opposition based on its unconstitutionality.

If the Court should find it constitutional, we could well see a new American revolution as States evoke nullification and refuse to accept or honor the decision. Remember what the first tea partiers knew. They didn’t have, nor did they need “constitutional” rights. They already had “unalienable” rights to life, liberty, and the pursuit of happiness.

Wow Alan...that is a great article! Very informative. I had no idea there were other Tea Party locations besides Boston. Was never taught that in school. Thanks for bringing this to light!

The Boston Tea Party was an act of rebellion, an act fraught with danger, loss of life and freedom a distinct possibility.

The TEA Party today bears NO resemblance to those patriots of old.

Taxed Enough Already is a slogan, nothing more, and all the TEA Party can, or will do is sit around and talk, talk, talk, wave a sign at a TEA Party Rally and talk some more about how they really showed Obama what THEY are made of...

And that is why I, and most others that I know, cut ALL ties with the TEA Party... They wanted to sit around and drink tea, not dump it in the bay...

@Fred: According to Cummins' book, there was no violance during the Boston Tea Party event and even though a British military ship was moored in Boston Bay, it did not respond. There was, however, considerable damage done by mobs of patriots regarding the British representative of the crown.

Contemporary reports in the local newspapers showed these people were Tea smugglers objecting to the removal of the tax on tea. They were disposing of the first locally taxed tea, which undercut their prices, so that they could dispose of their sticks. All the rest is political spin written after the event.

@Aelfrith: Not all of the local papers took this position. Indeed, news of the event was swiftly greeted with similar actions in towns in other colonies.

Not all the colonists supported the Revolutions, but most did and we can thank them for bringing about the USA.

Yes, today's Tea Party is a much more quiet affair than the original one in the late 18th century, and is attempting radical change in the government by redress and voting.

However, make no mistake about their resolve should the Obama Regime and the Left resort to outright tyranny and insurrection.

Like the Unionists during the run up to the U.S. Civil War, today's TPM (Tea Party Movement) is waiting for the other side to fire the first shots of civil war.

Then all hell will break out...

It is no mistake that gun and ammunition sales are very strong this holiday season.