It's Bear and Deer Hunt Season in New Jersey 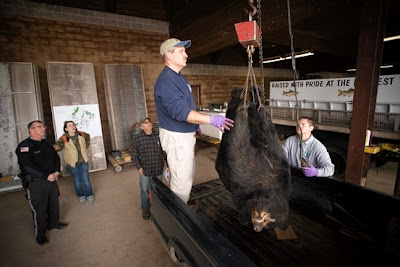 Corzine served from 2006 to 2010. It was a bad idea because the bear population had surged and became an even larger problem for folks in the northern counties. Gov. Chris Christie had promised to reinstate the bear hunt when he ran for office. Previously there had been bear hunts in 2003 and 2005. A legal challenge thwarted a hunt in 2007.

As a recent Wall Street Journal article noted, “New Jersey could be considered a bear’s paradise. It has mild winters and an abundance of acorns, berries, hickory nuts and other species favorites.” We might also mention bird feeders and easily accessed garbage cans. Those in bear country tend not to feed the birds and have garbage cans that can survive a WMD.

If you don’t think the sport of hunting is not popular in America, it’s worth noting that of the estimated 7,000 permits issued for this year’s hunt, some ten percent were snapped up by those from out-of-state and the first of some 200 bears killed on Monday, December 5, was taken by Robert Melber of Apache Junction, Arizona. He hadn’t been in the woods of the Delaware Water Gap for more than a half hour before he bagged one.

Need it be said that an environmental group, the Animal Protection League of New Jersey had filed and lost a court case to stop the hunt? Two dozen or so bear-huggers showed up to protest at a weighing station in Franklin on Monday.

To put this in perspective, the Wall Street Journal reported that “New Jersey’s bear population was 3,278 last year, up from 1,447 in 2003 according to DEP estimates.” It further noted that “Bears can live into their 20s and have an average of three cubs per litter, with a female able to give birth to 21 babies over her lifetime.” You do the math.

The deer hunting season coincides with the bear hunt and, in the county of Essex, hunters bagged 339 deer. To put this in perspective, Essex’s county seat is Newark and it is wall-to-wall suburban communities separated in some parts by two large reservation areas, a 2,049-acre South Mountain Reservation and a 408-acre Eagle Rock Reservation. I live within a two minute drive of the former.

There were so many deer in the South Mountain Reservation at one point they were literally killing the ecology. Rarely mentioned is the fact that deer are major vectors for Lyme disease, spread by infected deer ticks. When the ticks migrate they can infect humans enjoying the nature preserve. The county now has annual hunts and over the last four years the program has culled an estimated 1,089 deer.

Deer pose another problem as well. The NJ Department of Transportation says that more than 4,700 deer were killed by vehicles in the first week of November when the males are in rut and looking for love. Last year’s total was about 6,000.

It always strikes me as absurd that animal lovers probably think nothing of having steak or lamb for dinner or taking the family out to a local McDonald’s for a juicy hamburger. These are the same people who look forward to eating a big turkey on Thanksgiving. They no doubt eat a lot of chicken throughout the year. The vegans get a pass as they have to make do with tofu.

Suffice to say that the bear and deer hunters have probably saved more than a few lives and helped to keep the State’s wildlife population to a reasonable level. As is always the case, the animal rights crowd is utterly indifferent to the safety of the State’s human population because facts and logic have nothing to do with their wailing about how “inhumane” the hunts are in their view.

I hope one of the hunters sends a nice bear steak to Gov. Christie. And no, it does not take like chicken. It tastes more like pork.

This year in the state of Nebraska, an average of 65,500 deer were bagged this season last month. This doesn't even put a dent in the over population we have here. I will also note that the people I know who hunt, did it to feed their families and friends as they are experiencing a very bad economic situation and the price of beef in my state is beyond anyone pocketbook, including me. Only the rich can afford beef where I am, and I live in beef country. Also the millions of dollars in damage that deer do to our crop and hay land is mind boggling, not to mention the millions of dollars that deer do to vehicle collisions and death to occupants when deer come crashing through the windshield.

Thanks, Denim, you just made my case!

You are most welcome, sir.