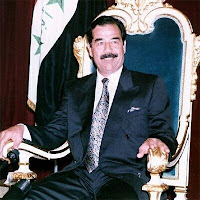 I rarely read The New York Times or Washington Post because the reporting is so biased it sickens me. Pick any topic, from politics to science, these and other liberal mainstream newspapers are divorced from the most basic standards of honesty and accuracy.

On Sundays, however, I visit their websites to get a sense of the latest liberal themes and, on the Washington Post site, I found “Civilian killings created insurmountable hurdle to extended U.S. troop presence in Iraq” by Liz Sly. It made me very angry and it should make anyone who lost a father, a brother, a sister or mother who served in Iraq, not just to drive Saddam Hussein out of Kuwait, but since 2003 to depose him from power and see him brought to justice in Iraq by Iraqis.

Thanks as well to those who served, but returned with grievous injuries, often from improvised explosive devises—many of which were made in Iran, along with all the others who returned home from the nightmare of fighting an enemy who looked like every other Iraqi.

The point of Ms. Sly’s article was to defame all who served in Iraq and, of course, those who died there. Quoting an Iraqi who lost family members, she encapsulated the theme of her article. “They are barbarians,” he said. He went on to say, “We wish they never had come.” One Iraqi hardly speaks for all Iraqis, of course, but in the context of Ms. Sly’s article, he did.

By the second paragraph, she was citing “a group of Marines (who) went on a shooting spree in which 24 Iraqi civilians were killed” on November 19, 2005. You had to read nine more paragraphs into the article to learn that charges were brought against seven Marines and dropped against six of them. A seventh was acquitted while an eighth will stand trial in January.

You had to read even further before Ms. Sly cites a U.S. military spokesman, Maj. Gen. Jeffrey Buchanan regarding the period of 2005-2007. Gen. Buchanan is not directly quoted, but Ms. Sly notes that “The vast majority of civilian deaths were the result of Iraqis killing Iraqis.” No kidding!

Iraqis killing Iraqis was endemic to the Saddam Hussein regime. The history of Iraq after he came to power in 1979 until his fall in 2003 is one of mass murder, summary and arbitrary executions, rape, and torture.

For example, in March 15-19, 1988, Saddam authorized the use of poison gas against the citizens of a Kurdish town, Halabja, killing thousands. That same year, he launched an Al-Anfal campaign of extermination against Kurds living in Northern Iraq. Their crime was siding with Iranians during the Iraq-Iran war that had lasted from September 1980 to August 1988. The attacks resulted in deaths estimated to be between 50,000 and 100,000, many of whom were women and children.

Saddam repeated this in April 1991 after having been driven out of Kuwait by allied forces led by the U.S. Uprisings in northern Iraq resulted in estimates of civilian dead ranging from 20,000 to 100,000 Kurds and between 60,000 to 130,000 for Shiites.

When U.S. troops invaded in 2003 several mass graves were found, believed to have been a response to a 1991 uprising against Saddam Hussein.

None of this information was unavailable to the Washington Post reporter who quoted a lawmaker, Sami al-Askari, identified as “a close aid to Prime Minister Mouri al-Maliki.” He said, “The image of the American soldier is as a killer, not a defender. And how can you give a killer immunity?”

American troops were and are always subject to U.S. military justice, but those troops often found themselves in fire fights with an enemy that did not wear uniforms. Civilians were killed in the fog of war.

The world shall probably never know how many Iraqis died in Saddam Hussein’s prisons or as the result of campaigns carried out against Kurds and tribes in the south. He had already used weapons of mass destruction, poison gas, and it was widely believed he retained the capacity to use them if invaded. The intelligence agencies of several Western nations were convinced of this, though few were found in the wake of the invasion.

It is a wonder to me that Ms. Sly took the time to report that, according to the Department of Defense, 4,474 American service members died in Iraq, 3,518 of whom were killed in action.

Our military is withdrawing at long last from Iraq. I will not engage in an analysis of the decisions that were made to invade, but the best one was to rid Iraq of a monster called Saddam Hussein who killed far more Iraqis than the American military ever did.

It should not escape anyone’s notice that, in the wake of the Iraq war, the citizens of Tunisia, Egypt, Libya, and currently in Syria, rose up to rid themselves of dictators. Were they encouraged by the U.S. military campaign and the result in Iraq? Yes.

Brief and concise review of the liberal way of slanting an article to support their own thesis.
When is comes to civilian casualties, liberals really like to raise hell whenever it happens. Yet, they also like to scream about how long our engagements last, how many American lives are lost, the financial cost of war. And what would be the principal cause of all this anger. Liberalism!
During Vietnam the liberal press made such dedicated effort to document every civilian casualty as a needless death caused by ruthless American soldiers it changed the way we engage in war forever. No longer are civilian casualties, regardless of how coincidental, to be allowed.
Now we have rules of engagement that prohibit the swift execution of war. Now we have developed multi-million dollar weapons systems designed to prevent collateral damage. All things designed to appease the sensitivities of those with no stomach for war, knowledge of how to fight it or understanding of any justification for it. To be sure, modern weapons systems have made tremendous strides in saving American lives while reducing accidental civilian deaths. That is a very good thing indeed. But what are the unintentional results of all this.
We fight wars of significantly longer duration. As a result, we have far more severely wounded soldiers returning home with little prospect for a normal life. The financial cost of war is hugely overinflated taking a monumental toll on our resources. Our standing throughout the world is diminished as we are seen as colonial occupiers rather than liberators. We have no strategy for victory because we fight only target specific battles without the ability to seek and destroy the enemy wherever he hides.
But, in the final analysis we do have fewer civilian casualties but we engage in wars we cannot win. We have much to thank our Liberal friends in politics and the media for. It's just not the stuff they wanted or are willing to admit they perpetuate.