Does the Democratic Party have a Death Wish? 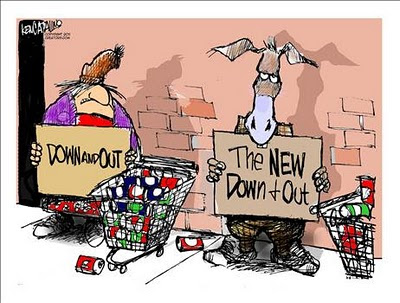 Does the Democratic Party have a death wish? It continues to display a suicidal desire to offend the delegates to its forthcoming convention and the rest of the voters.

In recent days we learned that it is contemplating a platform plank that would endorse same-sex marriage, something that its core African-American voters detest. Maybe they are after the gay vote, but gays constitute barely three percent of the population and not all are Democrats.

It has been announced that former President Jimmy Carter will address the convention via video. Widely regarded as the worst president of the modern era, if not of all the presidents until Obama was elected, Carter in his post-presidential life is best known for embracing every dictator he ever met, for attacking Israel as an “apartheid” state and as a staunch defender of the Palestinians whom even fellow Arabs dislike. I am sure many American Jews, another voting bloc for Democrats, will likely be offended by his participation.

Elizabeth Warren, a Massachusetts candidate for the Senate who originated the “You didn’t build that” meme that Obama embraced will be another convention speaker and, it turns out, she enhanced her resume by claiming to be a native American with an infinitesimal amount of Cherokee blood. Even the Cherokee nation has disowned her. There goes the Native American vote.

In an odd decision the Democrats have given the job of nominating Obama to former President Bill Clinton. Never mind that he was the first President since Andrew Johnson to be impeached while in office or the first to be exposed for having an affair with a White House intern as young as his daughter. As President, he witnessed the return to power in Congress by Republicans. Many of the programs for which he is given credit were initiated by them. Obama has just used yet another executive order to gut the welfare reform program he signed into law!

Meanwhile, President Obama continues to campaign by calling for higher taxes on everyone, but carefully never mentioning his much-hated signature legislation, Obamacare. Catholic delegates to the convention may be wondering if they have to park their conscience at the door given the Obamacare mandates regarding abortion issues.

Then there’s the little problem of more than forty-two straight months of unemployment in excess of eight percent or the three years without a budget vote. Running a nation on continuing resolutions is a very bad idea.

Harry Reid, the Majority Leader in the Senate who has blocked more bills from even being debated than anyone in modern memory, recently stood in the well of the Senate to announce that an anonymous source—a little birdie—told him that Mitt Romney had not filed his tax returns since shortly after the end of the Civil War. He was soundly denounced for such piffle, but it does reflect the kind of lies the Democrats are now resorting to.

Advertising supporting Obama’s reelection has included one that suggests that Mitt Romney was responsible for a woman’s death even though it occurred years after he had left Bain Capitol and was filled with other lies. An earlier Democratic ad portrayed Vice Presidential pick, Rep. Paul Ryan, pushing an old lady in a wheelchair off a cliff. Campaigns have always been ugly, but suggesting one’s opponents are murderers is a new low. The odds are we have not yet seen them reach the bottom rung of iniquity.

The Ohio Democratic Party law suit to deny an early voting option to those serving in the U.S. military is yet another dumb move and it is widely believed that the Democrats are again looking to have dead people vote in large numbers.

Has, in fact, a political party ever had a more deceitful and distasteful group of leaders than Harry Reid, Senate Majority Leader, Nancy Pelosi, House Minority Leader, and Rep. Debbie Wasserman Schultz, the current DNC chairwoman?

Does it strike anyone as hypocritical and absurd that while the DNC hammers Romney to release his tax returns, Obama has yet to have released his college transcripts, the passport on which he traveled to Pakistan, or any records that might provide some truth as an alternative to the fairy tale memoirs he has written?

Who else can the DNC offend? It would not surprise me to see a Muslim imam get the call to provide the opening and closing prayers.

Alan, it's only conservatives who see these as blunders. The Dems don't seem to realize that they are so far out in left field (pun intended) that they aren't even in the game any more.

Many of their supporters aren't even aware of these facts.

Good point, Donna. None of these folks seem to be smarter than your average squirrel.

It is really simple--they are deluded in their beliefs that they have the pulse of the nation. If Obama is re-elected, their delusion will be on the order of megalomaniacal (liable to be violent, no matter how well things may go for their pet policies).

HDH is right... A re-elected Obama will believe himself to be ordained and will use his powers to no good, more so than he has done to this point...

Obama's minions will take to the street believing themselve to have a mandate to rape, rob, murder and destroy...

If Obama is NOT removed, anarchy will reign and this nation, as WE know it, will be gone from the earth forever..

Obama says he'll reduce the deficit and is a patriot. That's enough for the Democrats and the dumbos out there. Let's hope America has enough intelligent people to vote him out. I'm not so sure. The MSM (apart from Fox) is all carrying water for Obama. You only have to see how they've attacked Paul Ryan since his VP announcement. They haven't even tried to act unbiased. RIP the USA.

In my never humble opinion, the leaders of what I call the "Democommie Party" are raving hated filled psychopaths who create their own reality by lies...and believe them.

Thus what appears to the good, intelligent, rational and fact based to the readers of Alan Caruba to be "simple minded beliefs" has nothing to do with intelligence - as many a political genius has believed his own lies.

Clearly he was a political genius of the first order and individual who believed in his own Big Lie of the "Vast Jewish World Conspiracy" of both Capitalists and Communists working together to rule the world.

I think the Republic is lucky that Obama is not the genius of politics like Hitler - in fact, I think he has a below average I.Q. - but I think he believes the "Big Lie of Socialism" as does the inner circle around him.

I counsel all stalwart Republicans not to waste their valuable time attempting to understand "The Big Lie" and have reasoned argument with it - this is a complete waste of time - our main goal should be its destruction in the next cycle of elections.

A defensive war cannot be won...

At the end of the day, the battle is always won by those with the best ideas and the aggression necessary to conquer the enemy.