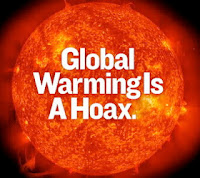 The more the public grows skeptical of the global warming hoax, the more desperate the charlatans behind it become.

There is no global warming if by that one means a sudden, dramatic increase in the overall temperature of the Earth. It is not, nor ever was, caused by an increase in carbon dioxide (CO2) in the Earth’s atmosphere; currently a miniscule 0.038 percent. Climate science has demonstrated that CO2 increases show up centuries after a major change in the Earth’s temperature, not before.

In recent testimony before the Senate Committee on Environment and Public Works, Dr. John Christy, Alabama’s state climatologist, a professor of atmospheric science and director of the Earth System Science Center at the University of Alabama, Huntsville, said, “It is popular again to claim that extreme events, such as the current central U.S. drought are evidence of human-caused climate change. Actually, the Earth is very large, the weather is very dynamic, and extreme events will continue to occur somewhere, every year, naturally. The recent ‘extremes’ were exceeded in previous decades.”

Recent examples of the Warmists to convince the public that the Earth is in peril include an opinion by the president of the radical Environmental Defense Fund, Fred Krupp, in The Wall Street Journal, and a PBS television report featuring NASA’s Dr. James Hansen, offering a statistical analysis as bogus as his 1988 testimony that global warming was man-made and going to kill us all if we didn’t destroy the economy by outlawing CO2 emissions.

Noted meteorologist, Anthony Watts, whose website, WattsUpWithThat, is a treasure trove of real climate science, dismissed Hansen’s PBS presentation of bell curve charts claiming the current drought conditions as proof of global warming. “This bell curve proves nothing,” said Watts. “This is nothing but a political ploy from a man who has abandoned any pretext of professionally done science in favor of activism.” Watts’ research has demonstrated how corrupt many of the temperature findings have been due to the sites where thermometers have been placed as well as the many places on Earth where there are none.

In The Wall Street Journal Krupp penned a plea for “A New Climate-Change Consensus.” Bear in mind that the nexus of the global warming hoax has been the United Nations’ Intergovernmental Panel on Climate Change (IPCC) and it has claimed for years that a “consensus” of scientists worldwide agrees that global warming is real. The data on which the IPCC claim was made was exposed in 2009 when emails between the scientists providing it revealed their panic over the signs of a global cooling cycle that had begun in 1998. The Earth has been cooling ever since.

Science does not work by consensus. It works by the rigorous testing of hypotheses and theories.

Even Krupp noted that “One scorching summer doesn’t confirm that climate change is real any more than a white Christmas proves it’s a hoax.” True. However, year after year of thoroughly debunked “data” by our own government agencies like NASA doesn’t make it real either. Did I mention that Dr. Hansen is the Director of NASA’s Goddard Institute for Space Studies?

About the only truth Krupp stated was that “Some proposed climate solutions, if not well designed or thoughtfully implemented, could damage the economy and stifle short-term growth.” Or any growth for that matter.

As this is written, the Environmental Protection Agency is seeking to apply draconian limits on CO2 emissions for every single entity of the U.S. economy from large companies to small businesses. Despite centuries of U.S. coal reserves, the EPA has been hard at work putting coal mining operations and coal-burning plant that generates electricity out of business.

Steven Goddard, writing in the August 6th edition of Real Science, was quick to point out that “There were twice as many daily all-time high temperature records set or tied during the 1930s as in the 2000s, for USHCN stations which were operational during both decades. That is why he (Hansen) doesn’t start his baseline (for the charts he showed in the PBS program) until the 1950s.”

Neither Krupp’s sweet words of inducement to global warming skeptics, nor Dr. Hansen’s lies add up to the fact that there is no global warming and never was except in the minds of those who sought to profit from selling “carbon credits” to industries and individuals who wanted permission to cause emissions of CO2 for any reason.

There ought to be a chart concerning how global warming lies rise and fall with each climate event like a drought or each new revelation of scientific fact that disputes and debunks the hoax.

It's 102° here in Rowlett today, but we don't call it global warming, we call it August...

Fred and I are experiencing "WEATHER" as opposed to "CLIMATE." Unfortunately, the hoaxsters often represent weather extremes as climate/climate change. It's a cheap trick that will cost us dearly!

Rahm Emmanuel said it best, "You never let a serious crisis go to waste. And what I mean by that it's an opportunity to do things you think you could not do before." Perhaps he should have added that it's especially sweet when the crisis is a hoax, and the author(s) can re-shape the parameters to fit whatever narrative they wish. With respect to such a strategy, the global warming context is almost a perfect fraud; if only their models and their predictions were ever accurately mirrored by actual events.

As it stand, Albert Gore's machination is the greatest fraud in modern human history.

Don't forget about one other facet of the issue, the increasingly desperate attempts of AGW promoters to portray skeptic scientists as being corrupted by industry funding.

Regarding James Hansen's appearance on the PBS NewsHour yesterday, I've documented how his appearance was among nearly 20 other IPCC/NOAA guests pushing the idea of AGW, yet no skeptics have been on the program going back to at least 1996 to present rebuttal. I had the opportunity to directly ask the host Hari Sreenivasan about that, and he predictably failed to answer my questions, as have others there before: http://www.pbs.org/newshour/bb/science/july-dec12/hansen_08-06.html#comment-612641995

When so many pushing the AGW side fail to answer straightforward questions or run from debate, it isn't exactly a good indicator that they are confident in the actual merits of the issue.

Have you read Ayn Rand first novel "Anthem" published in 1936? The copyright is public property and it can be downloaded for free.

Ayn Rand was a prophet and Anthem is the shape of things to come unless we get serious about stopping these nutburgers of the Left.

First time ever: Snow in all 9 provinces (South Africa)