Why the Federal Budget Matters 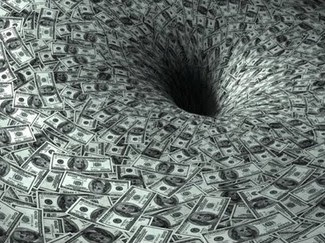 Say “federal budget” to most people and their eyes glaze over. It is something comprehended in the abstract and barely understood, but it represents the decisions over decades regarding the nation’s priorities and policies. And that is why it matters. 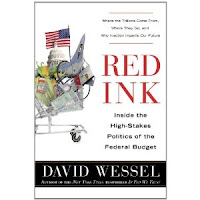 David Wessel is the economics editor for the Wall Street Journal and writes a weekly column about the state of the nation’s economy. He is blessed with the ability to make the obscure and arcane comprehensible and his new book, “Red Ink: Inside the High-Stakes Politics of the Federal Budget” ($22.00, Crown Business) is available at Amazon.com for well under the cover price.

Instead of reading a mystery or a thriller, I would recommend you read Wessel’s book because it unravels the mystery of the federal budget and is a thriller insofar as America is headed over a fiscal cliff as surely as we have seen the member nations of the European Union, with the exception of Germany, collide with reality.

The book is filled with revelations such as the fact that much of the federal spending is on autopilot and goes out the door without an annual vote by Congress. In 2009, for the first time in the nation’s history, every dollar of revenues had been committed to Social Security, Medicare, and other so-called entitlement programs before Congress even walked in the door.

There is much more to ingest. For example, the U.S. Defense budget is greater than the combined defense budgets of the next seventeen largest spenders. The federal budget is so intractable that if every federal employee from the President on down to meat inspectors were laid off it wouldn’t save enough to even cut the deficit in half.

The deficit is the difference between the revenues the government collects annually and what its many programs require in funding. The debt is the amount of money the government borrows to make up the gap. In 2011 it borrowed thirty-nine cents of every dollar it spends. A private business run this way would soon be forced to close its doors.

Politics plays a major role in how the government deals with issues involving in the federal budget and Wessel notes that compromise was achieved in the Reagan and Clinton years. Both men understood the need for compromise, something built into the Constitution by its deliberate division of powers between the executive and legislative branches.

Obama got Obamacare passed when the Democrats controlled the House and Senate. Republicans unanimously voted against it. He has preferred confrontation to compromise and the use of executive orders to do an end-run around Congress.

This explains in part why voters returned power in the House of Representatives in 2010 (where all spending legislation is initiated) to the Republican Party after witnessing the hemorrhaging of spending and the rise of debt during the first two years of the Obama administration. A large number of Tea Party candidates won office. The Tea Party movement began as a massive, spontaneous protest against Obamacare.

The financial mess in which Americans find themselves these days was predicted by Thomas Jefferson, our third President, and author of the Declaration of Independence.

“It is incumbent on every generation to pay its own debts as it goes.” He also warned that the “the future happiness for Americans” depended on whether “they can prevent the government from wasting the labors of the people under the pretense of taking care of them.”

A congressman elected to the House of Representatives immediately begins to fund-raise for his next campaign in two years. A candidate in the Senate has six years to build a campaign fund. The temptation to let “the next Congress” deal with pressing, immediate financial problems is overwhelming. The deep division between Democrats and Republicans has rendered the ability of Congress to actually address the financial crisis nearly impossible.

The problem for all members of Congress and whoever is in the White House is demographics, the study of population trends. More and more Americans are getting older and programs created in the 1930s and 1960s are being swamped by that unanticipated fact.

There are 435 members of Congress, but there are 12,500 people registered as lobbyists in Washington “many of them toiling over an obscure piece of the tax code that matters to a handful of companies.” For good or ill, these lobbyists are necessary to avoid further damage to the economy though, of course, many work for “special interests” that both protect and benefit corporations and trade associations of every description.

Historically, Americans hate taxes and engaged in a Revolution against England to rid themselves of them. The issue of tariffs on imported goods led to the Civil War, so how the government raises money has significant ramifications. Wessel points out, however, that for most Americans the share of income paid in taxes to Washington has come down over the past decades.

And, yes, the rich do pay the largest portion of taxes collected though because much of their income comes from investments—capital gains—they pay at a lower rate than others. Encouraging investment makes sense in a capitalist economy. The alternative is a government that owns everything and citizens that are its slaves.

We are all, Democrat and Republican, liberal and conservative, on the ship of state together. Unless prudent changes are made now to reform entitlement programs and other spending, we shall soon be Greece or Spain or any other nation that spends more than it collects.

Alan, I do hate to say it, but it is all over for Europe and America as of now. The EPA has ruined American companies, by setting rules which prevent companies from any sort of mining, smelting, and any sort of adding value to out economies.

It is far too late now, and our federal debt is so large that not a single red cent times about five, is already being spent on federal gubmint programs.

Until the election of LBJ, we had budget surpluses.