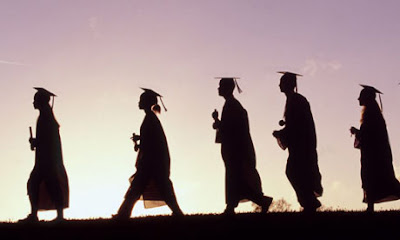 In 1956, Adlai Stevenson was campaigning for the presidency a second time and stopped by the campus of the University of Miami. I was asked to join the line of students who got to shake his hand. Suffice to say I was utterly clueless as to who he was and what the election was all about. I was 19 at the time, Eisenhower was President and on his way to a second term. I was a sophomore in every sense of the word.

In those halcyon, post-war years the economy was booming and students could look forward to finding jobs and beginning their careers. Some of us were subject to the Draft in which we gave two years to service in the armed forces after college, but it was understood that this was a debt we owed our nation.

It is very different for today’s college students and graduates.

In an August 1 Wall Street Journal column, Daniel Henninger noted that a WSJ-NBC poll indicated that “enthusiasm for the election among voters aged 18-34 is sloping downward, from above 60% when Mr. Obama was new to below 50% now that he is known.”

“Whatever change the youth vote had hoped for then, the most compelling delta in their world since is the rate of non-employment for those aged 18 to 24, which has risen nearly 16%. A study compiled recently by the Associated Press, based on academic surveys, said the combined rate of youth unemployment and underemployment was an astounding 50%.”

Does anyone seriously think those young people who do rouse themselves to vote are going to stick with Obama?

Generation Opportunity is a non-profit, non-partisan organization that seeks to engage younger Americans, generally 18-29 years of age, “who find themselves dissatisfied with the status quo and willing to create a better tomorrow.” And who does not, at this point, want a better tomorrow?

77% of young people ages 18-29 either have or will delay a major life change or purchase due to economic factors:

Just 31% of 18-29 year-olds approve of President Obama's handling of youth unemployment. More than two-thirds of this age cohort is very unhappy with Obama.

“For nearly three and a half years, young Americans have experienced historically high unemployment levels—levels that are among the highest since the end of World War II—that tell the story of millions of delayed dreams and careers of the next greatest generation.”

On August 3rd, Generation Opportunity reported that millennial unemployment was at 12.7 percent in July. For African-American youth (18-29) the rate was 22.3 percent. For Hispanics it was 14.0 percent, and for women it was 12.6 percent.

In 2008, many—like other Americans—of this generation was excited to vote for the first Afro-American to become President and by his message of hope and change.


They were energized as well by the use of the Internet to secure their campaign contributions and organized to help his campaign. They are the most “connected” generation in the history of the nation thanks to advances in communications technology.

The Internet has become the great engine of capitalism, but Obama is the antithesis of capitalism. He has done everything in his power to crash the economy and the younger generation knows it because they have been disastrously impacted by his policies.

Daniel Henninger wrote “The youth vote this time comes down to one thing: is this candidate going to plug me into the new American world, or not? The Obama presidency has knocked four years of earning power off a lot of people’s lives. Maybe someone should create a website for user reviews of the presidency.”

The youth vote—if they vote—includes a lot of young people living at home with their parents, unable to find a job, saddled with college loan debt, and no doubt deeply unhappy with Barack Hussein Obama. They have many reasons to vote for Mitt Romney, a successful venture capitalist.

In 1956, Alan, I had been serving in the USAF, in Intelligence, for 2 years, and was married, with a child on the way. The number of young lads such as myself serving the "active duty" part of our 8 year military obligation was huge, and the "Cold War" was well underway.

Not looking in the least bit good, Alan, and I expect even worse to come, and quite soon at that. Having lost almost all of our annual corn, soy beans and hay crop this year, not good at all.

Unfortunately the young are gullible and naive, until they grow up, become adults and parents and then realise what a mess the country is in. Is it any wonder that politicians like Obama target the young and naive and people who rely on government for their entitlements? That is the current Democrat voter profile. The newby teen voters will vote for Obama because they listen to their friends and it's cool to vote for an AA. However, those who are now living the Obama hope and change rhetoric will probably either not vote or vote for Romney....hopefully.

It would appear the college age generation has been mugged by the well known reality that socialism doesn't work.

The question I have why do we have keep going back to the past?