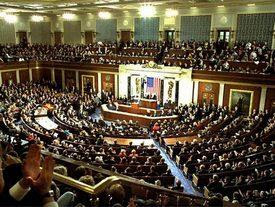 
This is for all those who voted to reelect Obama or those who stayed home on Election Day 2012 because they found Republican candidates who talked about unemployment and the need for more jobs unappealing.


What awaits Americans in 2013 is the largest tax increase in the history of the nation and it is not because the Republicans in the House of Representatives did not propose and pass one plan after another to avoid it.


What awaits Americans in 2013 is the result of the failure and refusal of Congress to reform a huge and horrible tax code that even Certified Public Accountants and IRS bureaucrats cannot fathom and, unless an alternative minimum tax "fix" is quickly approved, the IRS has notified Congress that up to 100 million taxpayers will have to wait to file while it overhauls its computers.


Failing to act on the recommendations of the Simpson-Bowes Commission to reduce government spending, reform the tax code, and save the “entitlement” programs, and ignored by the President, resulted in a “sequestration” program of automatic, draconian reductions that will cut the defense budget at a time when it is our primary deterrent to attacks on the homeland and  the protection of our interests around the world.
Across the board cuts will impact all aspects of life in America; reductions in government spending that should have been introduced in a sensible, reasoned manner.


Remember George W. Bush who Obama insisted was to blame for the economy he “inherited”? The roll-back of the Bush-era tax cuts will impose increased taxes on families making between $50,000 and $75,000 that are estimated to take $2,400 from them according to one non-partisan study.
Investment taxes will increase as well. The capital gains rate will increase from 15% to 20% for investors. Dividends would be taxed like regular income, affecting decisions to purchase stocks that aid the growth and expansion of corporations large and small.
An estate tax will impact families seeking to pass on their properties and savings to the next generation.


The Congressional Budget Office predicts the nation could lose 3.4 million jobs in 2013. Meanwhile, jobless benefits for the long-term unemployed are set to expire next year. The maximum 73 weeks in state and federal benefits will fall to 26 weeks, affecting two million jobless Americans now receiving them.


The U.S. has functioned without a budget for the past three years and one that was submitted by the President was soundly rejected by Congress.


Millions of Americans who saved for retirement and those on fixed incomes will suffer as these tax increases occur.
Millions of employers will put their workers on a “part-time” status to avoid Obamacare mandates, reducing their income.
Obamacare was judged to be a tax by a Supreme Court that failed to give weight to the requirement that Americans must now purchase health insurance whether they want to or need to. This directly contravenes the Commerce Clause of the Constitution. Some twenty states have refused to set up the insurance “exchanges” required by the law. Others struggle under the current Medicaid mandates.


This is misfeasance—the improper and unlawful execution of an act that in itself is lawful—by a Congress charged with the governance of the nation.


Politics has always been understood as reasoned compromise between those elected to office, but as we have seen in the weeks leading up to the so-called “fiscal cliff”, the President has refused to negotiate in good faith or to compromise. No doubt he plans to blame the Republicans for the ills of the nation.


As a result, Americans will keep or spend less of their earnings and millions more will be thrown into unemployment.


Most are unaware of these realities. While all this occurs, the nation’s debt of $16 trillion continues to grow in a nation whose Gross Domestic Product—the earnings from all its goods and services—stands around $14 trillion. This is unsustainable and it threatens the future of the nation whose credit rating is likely to be reduced.


It is a perfect storm.

Yes, Mr. Caruba, a perfect storm and just wait until these idiots who voted for O and for those who did not vote, until they go to the grocery store in the next few weeks to see the price of food, especially dairy go out of sight because of the farm bill not being passed...
Guess they have to take a hit in their pocketbook before they open their eyes, unfortunatly, the rest of us will take the hit also.

Make no mistake, we are facing a reckoning..

My Federal sources are telling me it may be that favorable on THEIR level too.. IF this BS comes to fruition, there are a lot of PATRIOTS that WILL fight for God, Home and Country..

Deo vindice! The current regime hasn’t got the support they believe they do.

A pox on all those who voted for Obama...that's my "Merry Christmas" to them!

"Like people, like priest" (Hosea 4:9). Leaders are rarely better than the people they lead. Especially when the leaders are chosen by those very same people. And on those few occasions when someone of real character does arise, crucifixion is just around the corner. It's bottom up, Mr. C. You can't make a good nation out of bad people.

DJ, I don't think Americans are "bad", but they are subject to ignorance, apathy, or the failure to live up to their highest standards.

Of course Americans aren't bad! Many of them are merely brainwashed and uneducated. What we need is a "march through the institutions" as the liberals did since the sixties. All institutions of society must be retaken, from kindergarten, through middle schools, highschools, colleges, newspapers, media, Hollywood, cultural establishments, etcetera. This is a work that will take a generation or more but is the only way to turn the tide. Let the march begin today!

According to Alan's friend and fellow blogger - J.D. Longstreet - this country is headed for the Second U.S. Civil War, and if Northeast Intelligence has it right, the author of the coming insurrection is none other Dear Leader Obama acting on the basis of his Marxist religion's central dogma of "The Revolution."

We may see CW II fireworks as early as the spring 2013, when economic collapse and anarchy in the cities allow the Feds to declare martial law and attempt to seize all private firearms.

If it comes to bloody civil war/revolution in the near term, I fail to see how the Left expects to win in a large country such as this and with a well armed body of millions of intelligent and well educated private citizens (many of whom are veterans) devoted to the U.S. Constitution.

However, the stupid, irrational and murderous are all hallmarks of the religious cult of Obama style Marxism.

This is called "reality hits". Unfortunately, people are so capable of living in fantasy worlds that unless reality really smacks them, they never pay any attention. The reason this is happening is because of that fantasy--we can steal from the rich, give to the rich government and it will all look like heaven on earth if we just all get along. For years, there has been no compromise in Washington and little to no backbone. I notice now that Republicans seem to realize they will be to blame for everything, they are saying "This is what will happen and Obama knows it and wants it." Even the NRA is standing up. If you back people into a corner and they have nothing to lose, no chance at reason, the claws will come out. Backing conservatives into a "you are to blame no matter what" corner may be the only thing that does stop this.

Lets face the facts, Obama has surrounded himself with dolts and tax cheats and Clinton Administration retreads. Half the people he’s nominated to Cabinet positions including the biggest lair of them all, Hillary Clinton. Some others of them have had to back out due to failure to pay taxes, and others have survived their tax failures and settled into their seats of power, expecting you & me to play by the rules that they flaunt. Nancy Killefer was gonna be the new Chief Performance Officer (whatever the fuck THAT is) but she’s a tax cheat. Tom “Dash-hole” Daschle withdrew from consideration as Health & Human Services Secretary. New Mexico Governor Bill Richardson was on the short list to for both State and Commerce, and withdrew over a grand jury investigation into ethics and the awarding of contracts to his supporters.
Alleged financial wunderkind Tim Geithner is now the Sec. Treasury, but is such a financial imbecile that he “accidentally” cheated on his taxes due to an inability to operate TurboTax. Kansas Governor Kathleen Sebelius is the latest nominee to the poisoned post of HHS, and she has tax problems. And what in the HELL is Arizona Governor Janet Napolitano doing as Secretary of Homeland Security? Is this a joke?

She couldn’t keep illegals out of her own state so how in the hell can we expect her to secure the entire nation? Arizona’s biggest import is Mexicans, followed by dope. Arizona’s biggest export to other states is Mexicans, followed by dope. She has the fucking audacity to call the Global War on Terror a “contingency”, and terrorism is now simply a “man-caused disaster”. What kind of politically correct bullshit is that? Why not just call it an Oopsie, or a Mildly Unpleasant Misunderstanding? And Shrillary Hillay Clinton…her and Obama were at each other’s throats all through the elections, and now they play all nicey-nice as she kow-tows to various foreign hosts and places all the blame for Mexico’s drain-circling on our shoulders. Maybe she’s just purposely assing it up to make Obie look bad? And lest we forget Barney “Buddy Hackett” Frank and Nasty Nancy Pelosi and Dianne Feinstein and Dirty Harry Reid…and that embarrassment Joe Biden...gawd, it took 233 years to get us here as a nation, and less than 90 days to derail the American Dream. Hope and Change!!! Yes We Can!!

DJ, earlier: You can't make a good nation out of bad people.

Mr C, responding: I don't think Americans are "bad", but they are subject to ignorance, apathy, or the failure to live up to their highest standards.

I don't mean to be picking nits, but the recent election has made it clear (at least to me) that all the "right wing" blogs and TV shows are merely "preaching to the choir" and have utterly failed to reach those outside who need so desperately to change (for their own good as well as ours). Hence the need for a different approach. Hence the need for a more precise definition of the problem. Which is what I'm aiming at here.