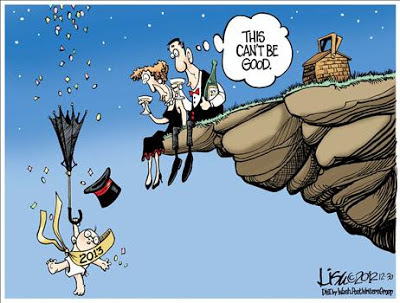 
All through 2012 I kept telling myself that, if I could just wait it out until the elections, a majority of Americans would surely set things right by electing Mitt Romney, but we have since learned that he was a reluctant candidate who, if we are to believe his son—and I think we can—really didn’t want to get in the race, but thought the others in the primaries had little chance of winning.


I won’t blame Romney for the loss. Running against an incumbent President has rarely yielded victory. He had all the right qualifications, but he always struck me as just “too nice” and, as we know, Republicans were reluctant to tear into Obama’s appalling record on the economy and other issues. Like Romney, they are “too nice” despite being up against political thugs.


I think 2013 is going to be a very unlucky year for the United States and it has a lot to do with the fact that Barack Hussein Obama is now free to finish off his destruction of America because he does not have to run again for office.


Anyone who has seen Obama in action over the past four years has reason to fear 2013 and beyond. Any man who wants to be President has to have a lot of confidence in himself and a very thick skin. Obama, however, turns every occasion, including the recent funeral service of Sen. Denial Inouye, into an opportunity to talk about himself. A National Standard article noted that during the recent funeral for Hawaii senator Daniel Inouye, Obama “in the short 1,600 word speech…used the word "my" 21 times, "me" 12 times, and "I" 30 times.”


Obama is the center of his own Marxist universe.


In his first term, we had an opportunity to see how he judges leadership. His cabinet choices and his unconstitutional layer of unaccountable “czars” who really determine policy were the kind of people willing to say anything and do anything to advance some very dubious policies. Billions lost on “green” corporations that could not compete and the bailout of General Motors and Chrysler left the taxpayer for a loss of more billions. His energy policy has diminished the use of coal despite the fact that the U.S. sits atop hundreds of years of this energy source that was the source of 50% of all the electricity Americans use when he took office and is now in decline.


His famed “apology” tour to the Middle East included a speech in Cairo, a city that exploded in rebellion against Egypt’s president reflecting similar events in Tunisia and in Libya. Whoever was advising the President clearly did not see any of this coming and were unprepared with a cogent policy when they did. The on-going slaughter in Syria has left America weakened on the international scene where the President’s preference to “lead from behind” has rendered our Middle Eastern foreign policy a joke.


When our ambassador to Libya was killed along with three others on his staff, it was obvious that the State Department had failed to respond to his many requests for increased security. This was then compounded by the most outrageous lies about the actual attack which was witnessed in real time in the White House via satellite. Only a President with contempt for the intelligence of Americans would attempt to pass off the attack as being unrelated to al Qaeda and the result of a video no one had seen. This is a scandal that rivals Watergate, an earlier government cover-up in which no one died.


Here again, 2013 will not bode well if Obama’s choice for the next Secretary of State, John Kerry, is confirmed as is expected. America first became aware of Kerry when, as a young veteran of Vietnam, he accused his fellow soldiers of offenses that were later proven to have no basis in fact. He threw away his combat medals. In the 1980s, Kerry campaigned for a nuclear freeze and the Obama administration has been reducing our nuclear arms arsenal at the worst possible time. Iran is just months away from having its own nuclear arms and, after that, no one can predict what they will do with them, but you can be sure they will use them. Obama’s promises to ensure they do not are worthless.


Obama’s reported choice for the next Secretary of Defense, Chuck Hagel, is already running into strong resistance for a variety of reasons, not the least of which is the perception that he is an anti-Semite. He has a record of favoring the downsizing of the military and regarded as a defeatist during the conflicts with Iraq and Afghanistan. If the sequestration cuts kick in, the Pentagon will lose nine percent of its budget, affecting the nation’s defense industries, affecting thousands of jobs. It is preparing to furlough 800,000 civilian employees. 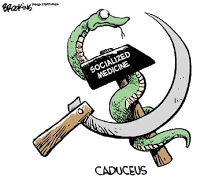 If she stays on, the Secretary of Health, Kathleen Sebelius, will continue her relentless attack on the nation’s health system, once widely regarded as one of the best in the world, but now a model of socialized medicine that will end up killing people judged too old or too sick to receive care. At the last count, at least twenty states are in open rebellion, refusing to set up “exchanges” to purchase insurance whose rates will rise exponentially. One can be fined for not buying it.


His Secretary of Treasury, Tim Geithner, has urged that Congress forego its constitutional duty to set the “ceiling” on borrowing despite the fact that no nation has ever been able to spend its way out of debt.


We arrive at 2013 with a Congress that has not passed a budget in three years, despite comparable bills to address spending put forth by the House and rejected by the Senate. Obama has refused to negotiate or compromise with the House, a process that has been going on since his failure to act on the recommendations of his own Simpson-Bowes Commission to reduce government spending. The debt has swelled by $6 trillion dollars in his first term to an unsustainable $16 trillion.


A Congress in political gridlock is the worst possible way to begin a new year. A U.S. population, half of which is dependent through various “entitlement” and government giveaway programs, is being purposely impoverished by policies that have thwarted job creation and economic growth. Too many Americans not only do not grasp this, but do not care.


Only the most feckless and indifferent President ever elected would have put the nation in this vice, but as I have written over the years, the choice of Obama, a virtually unknown first term Senator, was made by a cabal of those who have waited years to destroy the nation, once the only real beacon of freedom in the world.


Meanwhile, Americans are rushing to arm themselves and may well regard the government as the real threat; one that regards the Constitution as a pliable document it may interpret any way it wants.


2013 is likely to be remembered as the year that everything began to come unglued around the world. Islamic fanaticism is raging throughout the Middle East and parts of Africa. The Chinese are asserting increased control over their part of the world, challenging our allies, Japan, the Phillippines, and others. North Korea is making and selling missiles and nuclear arms as fast as they can. Russia senses opportunities to flex its muscles.


Only the military and diplomatic power of the United States has held the world together since the end of World War II when the U.S. became the world’s policeman for lack of any other power to protect the global sea lanes and deter despots. Those days are over.

Well written Alan. There is nothing to add really. Obama surely must know the destruction he has caused within America and around the world - otherwise he's dumber than he appears. The 'Arab Spring', after all, has occurred under his watch. However, America is in the grip of your lunatic fringe Marxist liberals with an anti-American agenda so America will have to really knock her head to recover (if ever). Obama has said that his next term focus will be on immigration and gun control. Not job creation - once again! So, you can look forward to the following soon: 1. a carbon dioxide tax - as another source of feel-good tax revenue and which will have nothing to do with the environment (ala Australia) 2. Gun control which will start out harmless and end up removing your second amendment rights and opening up your government to people-control; 3. mass third-world immigration, to further remove power and votes from the American citizen raised on the American Dream, and given to people with no skin in the game - financially or culturally. Not sure if there is more that Obama can do to destroy America apart from these 3 wonderful agendas, so all I can say is God Bless America because you are going to need all the blessings you can get as you fight evil within.

...because America has long since disappeared from the map.